For the first week in September I had the house all to myself, and at some point I developed a stage of beginning Blues. Couldn’t go anywhere because of the strike on German trains, my husband and son were away with the car, longish distance biking still not possible due to the wrist, and no other activities in the exercise realm either. It was a bit weird – because during lockdown times I had sometimes thought it might have been slightly easier if I had been in lockdown by myself, now the guys were out of the house and I still wasn’t really content. Of course, it wasn’t lockdown, travel would have been possible in principle, only I was not physically able to go anywhere, nor technically equipped to do something interesting. I didn’t mind being by myself, I can do that very well, but I did mind being scooped up in the house despite without the real possibility to move about.

I figured sitting down with sewing was the most helpful remedy and went upstairs to work on my scrap project, which had already progressed a bit since the former post about it.

After just a few minutes, however, I got very itchy because we were finally having a few nice and sunny days and I really wanted to sit outside. I searched (and relatively quickly found) my temperature quilt project, 2nd attempt. I had started that earlier in the year but put it on hold when I realized how big it was going to be as I had not really calculated what the chosen block size would add up to. It would have been over 7’ in height, and that was just too overwhelmingly large. When I reported my dismay my good friend Kathy had suggested I scale down the block size, which was a wonderful idea but also meant I would have to take apart the entire first month which I had already assembled. Of course, I am glad I had assembled that first month and made it a vital part of the production process, because otherwise I would never have found out until much later that I was facing this serious size problem.

This temperature quilt is a hand sewing project, so sitting outside on the terrace was a perfect surrounding for taking it up again. 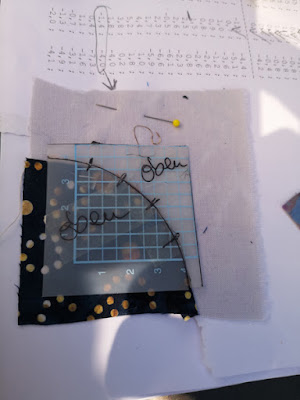 I made new templates, which left the quarter circle at the same size but seriously shrunk the background. That meant I could take apart the first month in complete blocks, mark the background fabric smaller and sew it all back together. The work of one afternoon, and I got a few new blocks for the second month done in that sitting as well. 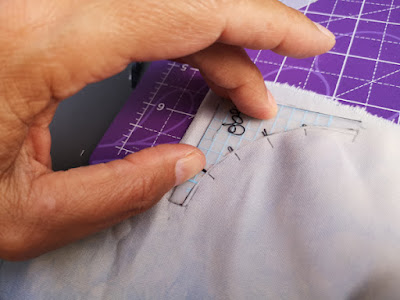 Since then, several more afternoons on the terrace have followed. I take my box, sit in the shade on an umbrella, and stitch the individual blocks, assembling them right away in monthly strips. 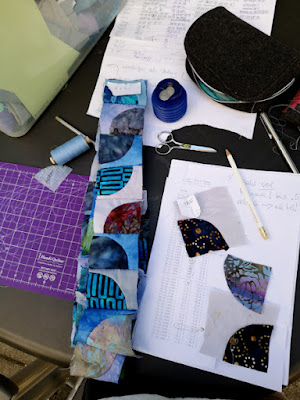 Orientation is determined by whether there was a rise or a drop in temperature, and depending on whether the difference is larger in the maximum temperature or the minimum temperature of the day. (Not fretting about it, because, strictly speaking, the four possible orientations don’t cover the entire range of possibilities that can come up.)

In this respect, of course, this temperature is not wildly original, there have already been many that did that. 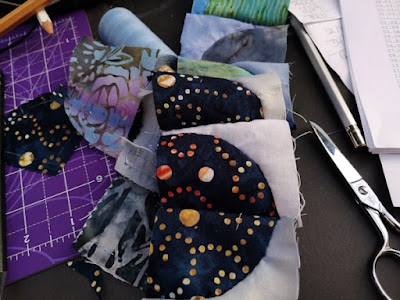 But I am juxtaposing two years: the past year, when I turned 55, and the year of my birth. The idea had started before I knew that 2020 would be the year of the pandemic and there wouldn’t be a whole lot of variation in terms of days out of town. (During my first attempt at a temperature quilt I had the trip to South Africa in August, which meant it could have been a difference in temperatures. Except for the fact that winter in South Africa is not much different in temperatures, at least maximum temperatures, than summer in Germany. Only the minimum was slightly cooler.) The difficult part in this concoction had been obtaining the data for my year of birth, which took several attempts, even almost led to the abortion of the project. But I managed to obtain those, and then the size hick-up... January 1965 will be followed by January 2020, February 1965 by February 2020, and so on.

Meanwhile, the project is growing. We have had a whole row of nice warm days, nicer and more consistent than most of the summer. While I have been stitching, there have been news that it was the summer with the most rainfall in Bavaria since who knows when, the hottest summer on average in Europe since the beginning of temperature records (except that it doesn’t feel like it for me), and the EU commission is passing a weird trade agreements which endanger the Amazon Forest, it’s been Earth Hour Day, hurricanes are sweeping the Southern US.