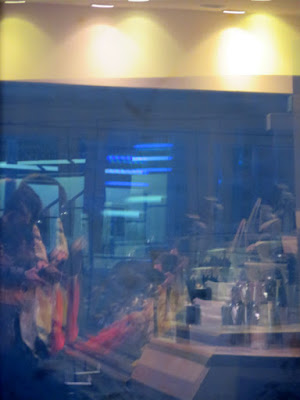 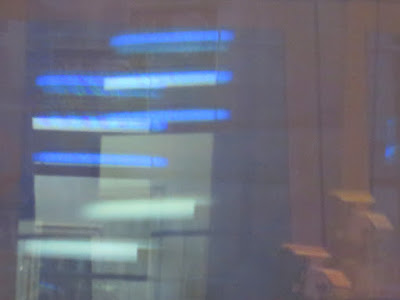 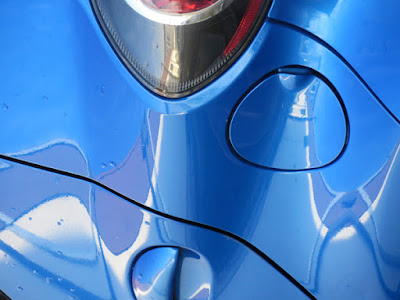 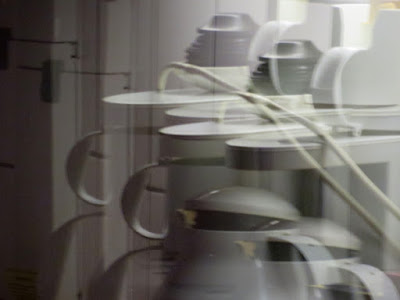 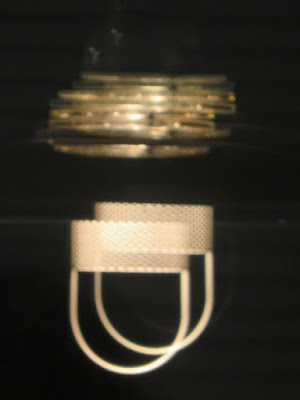 Getting out of and still dealing with the refugee crisis

Yesterday I was featured on the TAFA blog with an entry I had written on my experiences with the refugees and how that has affected my art. Yesterday was also the day when I handed over the volunteer network’s e-mail account to my successor in that function, thus ending my involvement with the network in an ‘official’ position. That does not mean I am withdrawing completely, as today I started German lessons with another refugee from , who had not come to me for lessons before. Only now I am not acting as a representative or spokesperson towards the city anymore. I am being completely selfish in that I take my pick - I chose the refugees with whom I want to work. Happy to be involved with them, and helping where possible, but only for people whom I like, and where I have the feeling that they’re not taking advantage of me and my time. Who are appreciating what I am doing for them, and where I have the impression that I am making an impact. I really felt good during the German lesson today, very relieved.
Before that I had already spent an undisturbed few hours this morning stitching, concentrating on my quilts. The blog post for TAFA closes with a statement that at present I am not consciously planning any more quilts that deal with the topic of refugees, but in fact I am presently still working on finishing two that are somehow related to that topic.
One is one of my very late contributions to the International Threads challenge which was born last year when Kathy Loomis and I were in , bought a set of eight embroidered squares from the Guldusi initiative, and challenged the group to make quilts that included these squares. All of the squares were stitched by the same woman, Nasrin. Most of the resulting quilts are finished already, and you can see them on the group’sblog. Mine – the only one still missing – finally is in the process of being finished, but there may still be a few more stitches that need to be added. I am really feeling what Gillian Travis immediately complained about when we were debating a change in size, that was to begin with this challenge. This is so much bigger than the size we were working in originally! The changed size has since then been totally revoked, back to the original size, but I had dedicated myself to working in the larger new size for this one so that Kathy Loomis’ quilt would not be the only one. For various reasons that I won’t go into detail about here I ended up using three of the embroidered squares, not only the one I picked out at first. 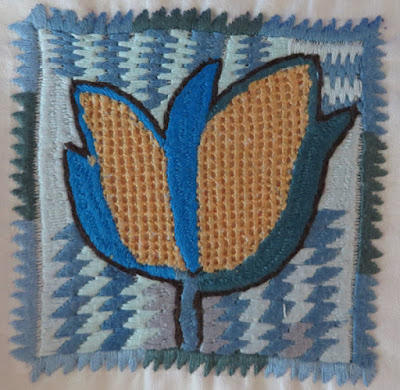 And I wanted to use them in combination with a piece of fabric for an Afghanistan head dress I had hand-dyed.  I also put the top on the longarm to add some glitter through the quilting thread that I can't use on my sewing machine, and now I am adding a lot of hand stitching to tune down the presence of the stitches on the head dress fabric. 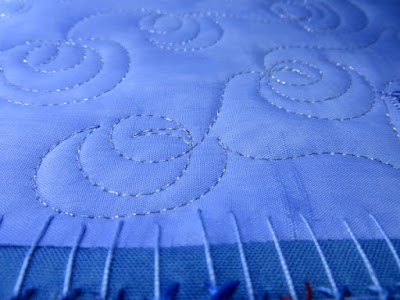 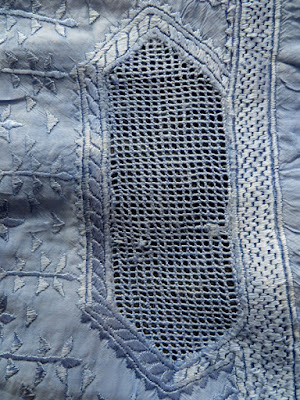 I am not quite certain how many more stitches will still need to be added, but I did make good progress this morning. 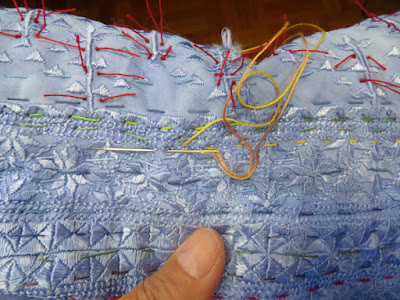 The second quilt still related to that topic is my first finished Journal Quilt for the year, and it resulted from a remnant of the head dress fabric, with a piece of purple and a few other additions. (Only the binding needs to be finalized on the back.) And it’s not really a refugee quilt, it’s just back to playing around with fabrics, threads, composition.

This was a happy stitching day!
Posted by Uta Lenk at Tuesday, February 23, 2016 3 comments:

On Sunday morning, I returned to my basket weaving class.
I added another layer to increase the height. And then the inbuilt handles - simple, but very effective!

And this is the finished product. 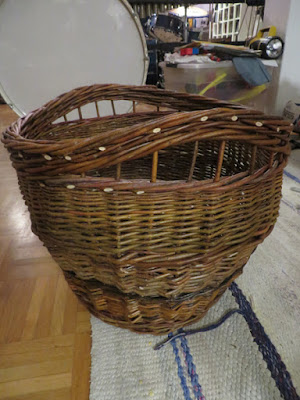 Right now it is drying in the warmest room of the house, the cellar where the heating system is located, and in a couple of days it should be ready to use. It measures about 40 cm in height. The different colors are the result of using different types of willow branches. It was a lot of fun! And I definitely want to make another one, perhaps even slightly larger, for my washing. But it does not go well with handling fabrics - working with the willows is rough on the skin of your hands, and these two activities don't go well in parallel! But a very good activity to relax and get your mind set on other things!
Posted by Uta Lenk at Tuesday, February 16, 2016 2 comments:

A few days ago a good friend of mine had a serious conversation with me about the fact that I should relax more, and what was I doing for my leisure, even or especially as I am pulling out of the volunteer work with the refugees. It's true, I find it difficult to just 'do nothing', I always have something planned for a possible wait (read a book, knit a little), and as most of my friends live in places rather far away from here I can't just go and visit a friend to do nothing with her besides just visit and be friends. And once somebody had put a pistol to your head and said "Relax!", that is just about the easiest task in the world!
So it's just as well that I had enrolled in a community college workshop on basket weaving even before that friend of mine lectured me, and indeed she was pleased when I told her that that was coming up. A special kind of café leisure, perhaps.
Today was the first of two days. Apart from the fact that we are having the class in the entrance area of the building where people are coming and going, it's drafty and and noisy and about as cheerful as in a train station waiting room of the 1950s it's been fun and interesting. And exhausting. I never imagined that making a basket requires so much strength. Here are a few pictures of what I am making:


We're a fast lot - the master basketeer said he doesn't usually have people who put in the second layer on the first day (which is the darker upper part on my basket here). Now I am wondering whether I will be finished too early - or should I add a third layer before closing it off? It's going to be a basket for my knitting.
Posted by Uta Lenk at Saturday, February 13, 2016 3 comments:

As I was taking a little walk yesterday I found this tree face smiling at me: 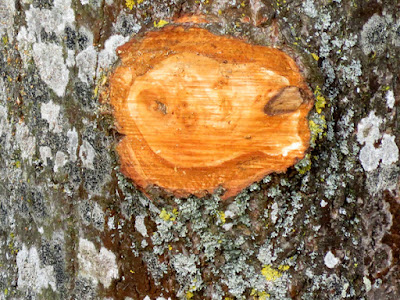 I was astounded at having 'so much time' recently, but I don't have the feeling that I'm accomplishing much. My husband thinks I am on the brink of burnout because of the refugees and the long-drawn-out withdrawal from that. My friend thinks, I'm not relaxing enough, not spending enough time doing nothing. Whereas I think I have really been very slow about getting back into the swing ever since I returned from New Zealand. Lots of different opinions about what is going on.
True is that I don't find it easy to just 'do nothing'.  True is also that I am really worried about what is going to happen with all those refugees who are now being bombed out of Aleppo, and how Turkey and EU are haggling about them. I have been reading a book whose title translates as 'Understand Syria', and as I am slowly coming to the end I understand well that there is not much to understand. I don't see that there is any possible solution, not on the political negotiations' side. And what happens when 'solutions' are being brought by bombing we are now witnessing again.
So I briefly considered mending a pair of jeans with one of my sew-off-squares. Which would have made a nice addition. 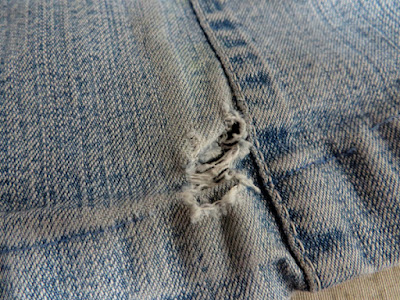 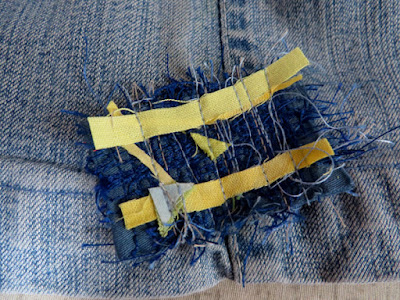 But before actually sewing it on I had the idea of looking into the jeans - and realized that it did not only feel thin and worn, it actually was thinned out veil-like consistency in several other spots as well. Not much use sitting down to serious mending with this pair any more. It will be worn until it falls to pieces. 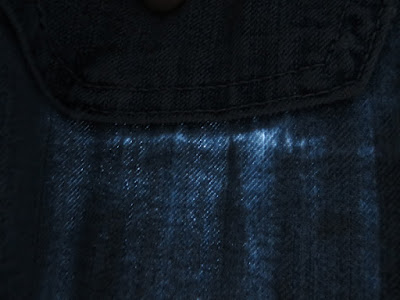 I am continuing on that Jacob's Ladder, which has progressed nicely and been pinned to the wall, but not completed yet. I am doing other scrap exercises, a kind of mindless sewing that keeps the fingers moving but is not too intellectually challenging. And I working on some exercises for an online class with Jane Dunnewold that I am taking. I could put a lot more energy into them, however - and yesterday evening as I was pinning pieces of a small composition to my wall I thought this could be the place where I should be looking for new ideas. Right now it is like physiotherapy - moving the limbs. But there was a little bit of a breeze yesterday, too.
Posted by Uta Lenk at Tuesday, February 09, 2016 No comments:

It was very difficult to choose the five pictures of reflections that I wanted to post! Here is the January selection. 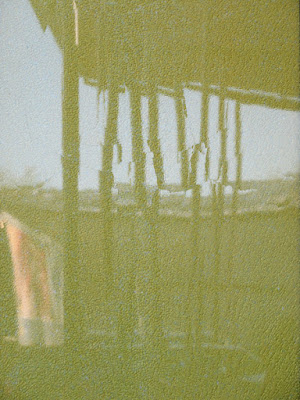 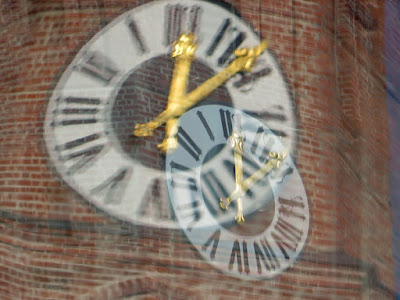 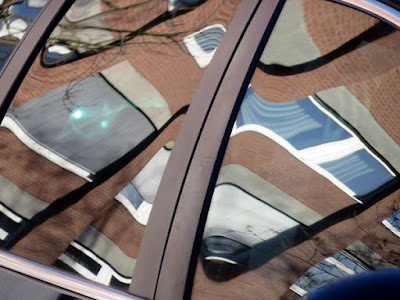 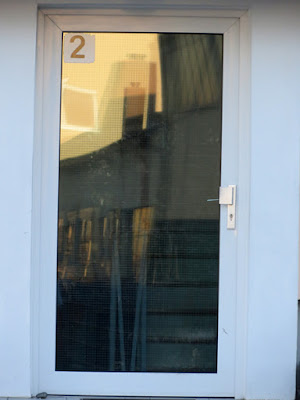 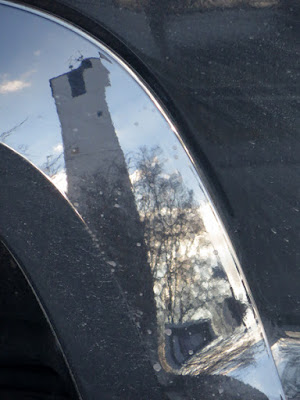