Colour of the month for August: orange.
Posted by Uta Lenk at Tuesday, July 31, 2012 No comments:

I’ve been following India Flint’s blog, „Not all those who wander are lost“ for a while now, and discovered a link to the entry „Simplicity Redefined“ on the blog ZenHabits not too long ago.
I am not a strictly Zen person, though I do appreciate many of the things I know about it.
I had a first chance to apply the attitude formulated in this entry just about 10 days ago. I myself have repeatedly discovered that plans are made only to be altered. That's life. But this – "embrace what comes to you" – is really taking it a step further, I think.
Ten days ago my son developed a fever in the afternoon, and it was clear that he would not be able to go to school the next day. My husband was away for a seminar, and my son would have gone to his drum lesson after school and then to visit a friend – I would have had a perfectly free day for getting lots of work done. Now he was sick at home, but not sick enough to feel the need to stay in bed and rest. So we spent some time trying out my new device to roll up wool. 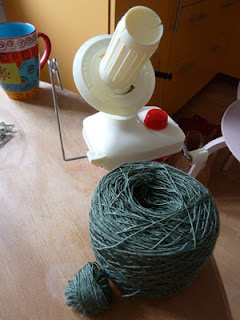 The rest of the day was spent playing games, reading, more games, more reading...
We had a good time, and although I did not get any work done that day (and felt the mounting pressure), I think it was a day very well spent.
These days now I am currently going through another phase of active application of that ZenHabit...
I’ve been waiting for the fabrics to start dyeing my July collection for the fabric club. Which should have arrived by the middle of the month, but had been delayed in delivery from the States, and then held up by customs. I have now heard from the agent that it was shipped to me this morning. I have prepared the colours – 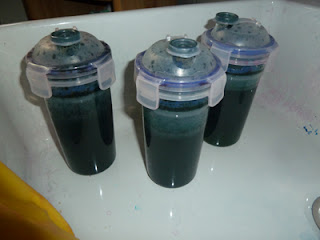 but am still waiting... Intensively.
Be a good travler, don't make plans, accept what comes at you...
At least I can now catch up on stuff I didn’t do when my son was sick.
Posted by Uta Lenk at Monday, July 30, 2012 No comments:

This year I once again donated a 12-inch-quilt to SAQA's fundraiser, the Benefit Online Auction. I was a bit late with my entry, so I did not get into the preselection that will be auctioned 'live' at the Houston Quilt Festival. But mine can be found on page 3b of the auction listing.


SAQA members are also invited to be a curator and put together their very own favorites in a selection as "Dream Auction Collection". This is my Dream Auction collection, with the title "Play of Lines". (Now how did I come across this title...?).

It is also shown on the third page of dream collections. You can find other interesting collections there, too.
Take a look at the SAQA Auction site, it's a great way to buy small quilts, and support SAQA at the same time. The auctions starts on September 10th, at 2:00 p.m. Eastern time (US).
Posted by Uta Lenk at Wednesday, July 25, 2012 No comments:

It’s been two months now that I have had my new sewing machine, the Bernina 820. Pretty much right after it arrived I went away for ten days of teaching and selling fabrics. That was followed by a frantic week of dyeing the May-collection of my fabric club.

So I did not really have much time to sit down and try out all those interesting features of the ‘sewing computer’, as it is called in the instruction manual.
Then followed two weeks of our family holiday on the . Basically I did not get around to sitting down and getting to know that new wonder of wonders until just a couple of weeks ago. And what I really would like to do, namely sit down with the instruction manual for a couple of days and work my way through all the different kinds of programmes, is not possible right now, but will have to wait until after the show in Ste. Marie-aux-Mines. So this current stage feels a bit like driving a Porsche without having had more than one driving lesson...
But I am learning. I have completely pieced “Play of Lines XXXI” and was very satisfied with the machine’s performance.

Although I was a bit worried for a little while because it kept showing me this little picture on the computer screen: 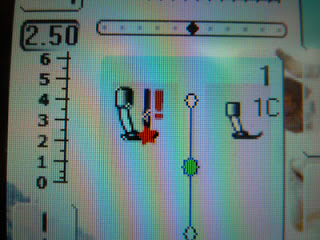 The instruction manual had lots of little pictures listed, but not this particular one. Searching the Bernina website did not help, either, and my Bernina dealer did not reply to my email of inquiry for a number of days. Barbara Lange suggested that it was the indication that the machine had realized that I was using a different foot and that it warned me not to put it into zigzag mode – which must be correct, because I was indeed using the walking foot at that time.
By now I think I have almost figured out how to use the automatic needle threader. The average number of attempts needed for successful threading is slowly going down. Sometimes it does not find the eye of the needle, sometimes it finds the eye, but pulls out the thread again right away when retreating. Sometimes it does work on first try, though.
This past week I have actually embarked on the first major quilting project, finishing Play of Lines XXVIII. This is the quilt that had really sparked the whole machine trouble with the Janome, because the thread had kept breaking. So I was pleasantly surprised at the ease with which free motion quilting progressed on the Bernina. The stitch regulator may need a more intensive phase of experimenting for me to feel as if I have really mastered it, but it worked. No more than three thread breakages on a quilted surface that measures almost six by six feet, can’t complain about that.


I have made sure to be very good about cleaning out dust from the bobbin case whenever I put in a new bobbing, but after finishing this major free motion quilting project, the machine complained quite a bit and kept telling me that the “lower thread surveillance” had discovererd some error, please check or rewind. Every two to five inches it would beep, flash that little sign, and stop. Can’t count how many times I opened the case, took out the bobbin, cleaned again...
But I finally seem to have got it all out, and then spent another day quilting Play of Lines XXXI, with the walking foot this time. It almost feels like I have entered the finishing straight. Not quite there yet, there are still several other UFOs hanging around which need to get finished before September 13, but I might actually make it.
Posted by Uta Lenk at Saturday, July 21, 2012 No comments:

When I was weeding my flower beds the other day – which is not really my most favorite way to pass the time - I was pleasantly surprised to find this: 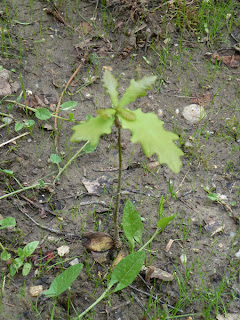 To be honest – only then did I remember that I had collected a few of Daily Oak’s acorns last fall and dug them in somewhere in our garden. You can even see the split acorn from which it has emerged: 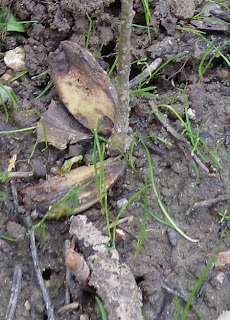 I probably would not have been able to tell you where I spread out those acorns even only one day after I planted them... But here is one of Daily Oak’s babies. Haven’t found another one yet, though. And most likely it will be several years before this one is taller than the currant bushes between which it is standing now.  By then we will probably have moved to another place anyway, so I will never see it grow to anything near full size. But I was pleased. I planted a tree, did something to save the planet.
Posted by Uta Lenk at Tuesday, July 17, 2012 No comments:

More than a year ago I have posted about the fascination of welding and that I wanted to take a class in welding.
In the end of October my husband and my son will be away for a drum-building workshop. My first thoughts that I could look for an interesting quilting workshop on that weekend were soon replaced by thoughts about that urge to learn about welding. I set down to research, and soon found a firm in
that offers welding classed on a pretty regular basis. Their schedule ended in July, however. So I called them, asked about their offers for October and would it be possible to set a date on that last weekend in October, and indeed they did. So I have signed up for that welding class.
The day after that I came across a wonderful dumpster which would have given me plenty of material, had I only had plyers with me to extract some of the beautiful stuff in there. 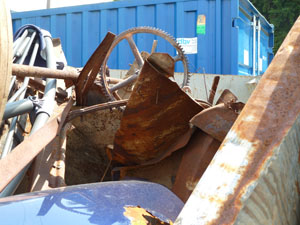 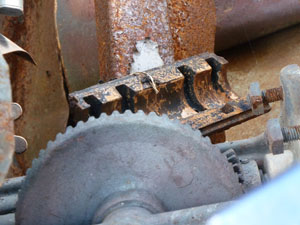 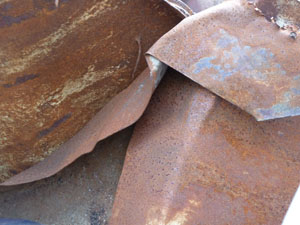 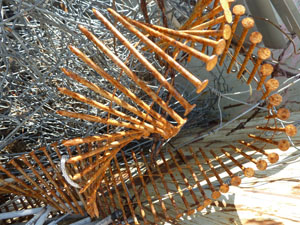 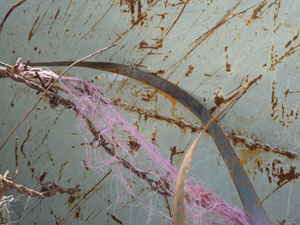 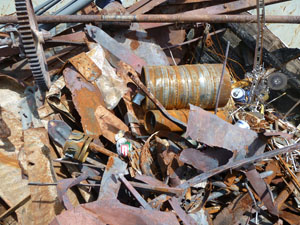 Especially that band of rusty nails really struck my heart. Taught me a lesson – never leave home without plyers!
Posted by Uta Lenk at Thursday, July 12, 2012 No comments: