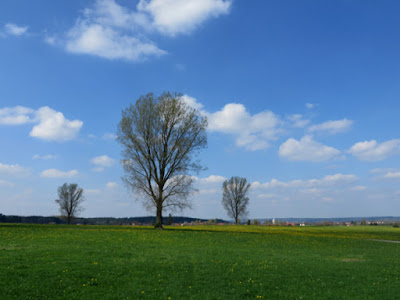 Or our Magnolia tree in the garden, which, for the first time in the almost twelve years that we have been living in this house, has managed to bloom without all the flowers being destroyed by onsetting rain right after the blossoms opened up. 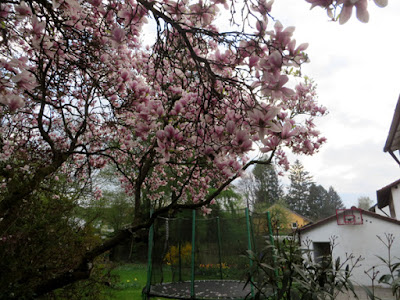 Or color combinations like this in the spring which convince me that spring is definitely the nicest season - while it's on - ... 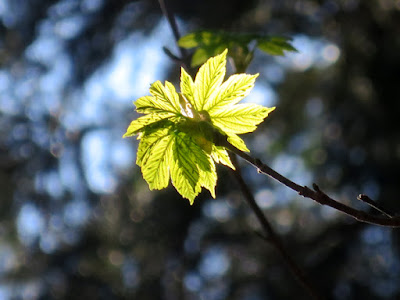 Yesterday I went for a bike ride in the area and finally found a very nice beech tree that meets all my requirements for the next daily art tree - except for the fact, that it is not in biking distance to be covered every day. 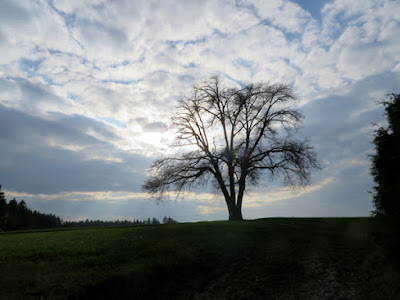 Would it be ok to go there only once a week? Have to think about that...
Happy Easter to everyone!
Posted by Uta Lenk at Saturday, April 15, 2017 No comments:

Th enewest issue of the Patchwork Professional Magazine is out, and it includes my article on how to make the best of unique snow-dyed fabrics.

If you can find a copy somewhere, check it out! 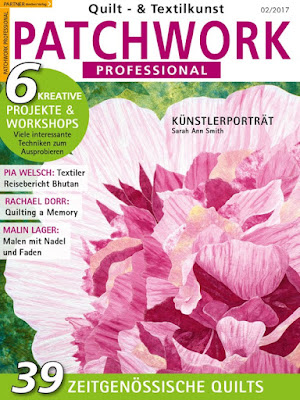 I have been a member of the TAFA-list for a few years now (here is a link to my TAFA-profile), and when Rachel Biel mentioned that she was preparing a blog post on maps I notified her of one of my recently finished quilts in the series text messages. I love maps, looking at maps (including mind traveling), and we have old prints of maps and geographical subjects on our living room wall.


If you want to surprise me and do me a favor, you can get a pretty or detailed map of one of my favorite places, or any interesting place in the world and I will be very happy!

That blog post on the TAFA-list was a little while in the making after Rachel had made the first announcement, but it is up now, and shows a number of interesting quilts and textile works on the topic of maps.
Here is a small photo of my quilt that  is featured on the TAFA-blog:


At that point when I offered Rachel that quilt to be included in the post, I had, I think, not realized that I was already working on another quilt that would apply to the map topic as well. It was made for an article in the magazine Patchwork Professional, where I am demonstrating how my snow-dyed fabrics can be used in traditional and art quilts. The article should be out any day now, but as long as it has not been published, I will post a full picture on the blog yet. A detail, however, is well in order, I think:


It is a combination of two pieces of snow-dyed fabric, and was quilted on the longarm machine.
Posted by Uta Lenk at Tuesday, April 04, 2017 1 comment:

The Falcon Hospital in Abu Dhabi

For my last full day in Abu Dhabi my friend had booked me into a tour of the Falcon Hospital near the airport. 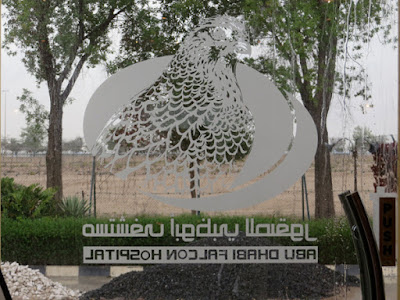 In fact, only a few weeks before I had heard a programme on the radio with an interview of the German director of this hospital, (you can find the German podcast of the interview here) not knowing that I would actually be visiting this fascinating place now.


I didn't know much about falcons before my visit, and I am far from being an expert on falcons now, but I must says it was a fascinating experience, and is well worth the trip.
It was a bit of an adventure to find the exit for the falcon hospital from the highway, but we managed alright. It was a rainy day in Abu Dhabi (yes, it sometimes rains in Abu Dhabi, and I was lucky to catch one of the rare days during my short stay!).

So here are a few things I learned about falcons. They have a passport to prevent smuggling. A passport has all the personal details of the falcon, including its ring number to prove that it was bred in captivity and is not a wild falcon (those are protected and must not be caught and tamed) - but no picture. 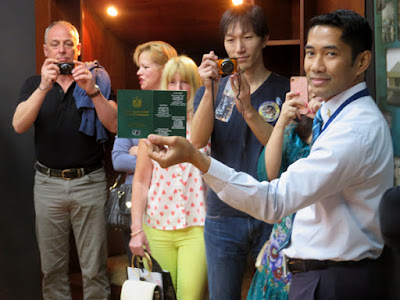 A picture would be superfluous, or the passport would have to be renewed every year, because the falcon's feather pattern changes every year with the moulding. 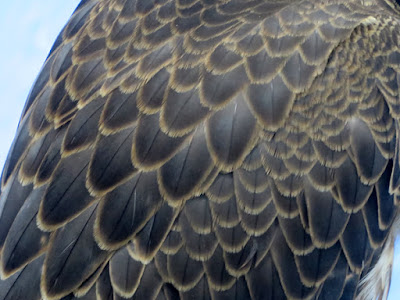 They need the passport because they travel with their owners to go hunting in various countries. For traveling and any kind of transport, as well as while they are waiting for treatment at the clinic, they wear eye shades, which keeps them totally placent and quiet. You might find one sitting next to you on the plane like this.


We were allowed to watch one falcon's treatment - shortening and sharpening of its claws, inspection of wings for broken feathers, and it was demonstrated how a broken feather can actually be fixed or even replaced. 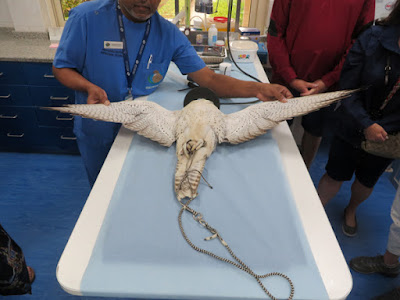 In the clinic they are also treating other kinds of birds - here is an owl whose mother had been treated, freed after treatment and kept returning to the cage until she started a nest and bred four youngsters. 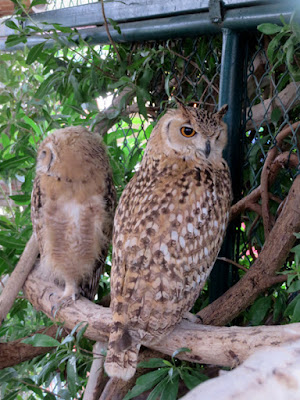 And you can check in your falcon for the off-season in a free-roam cage to have it under perfect supervision for moulding season. That way you know it will be in perfect shape when you pick it up again for hunting season after moulding is over. 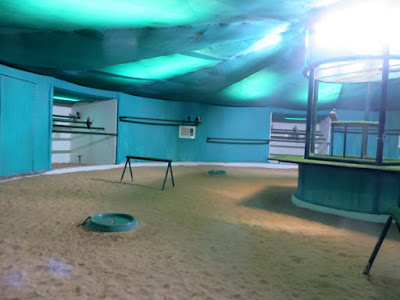