Some time at the beginning of the year I took my courage together and acted on something I had been thinking about for a while as I kept seeing posts on Sandy Snowden's blog about her involvement in The 70,273 Project initiated by Jeanne Hewell-Chambers. The topic of Nazi atrocities has been a constant in my life since I was about 12 or 13 years old, and I have never found it easy to be German. (That is most certainly also a major reason for my involvement with the refugees in Germany today - I had always asked myself how I would have behaved back then...)
So initially after reading about the project on Sandy's blog I had hesitations about getting in touch with Jeanne (and considered myself too busy, too), but early this year I finally did get in touch with her and wrote an article on the project for the German Patchwork Guild's magazine.

She asked me whether I wanted to be an ambassador for the project in Germany, and as I was just taking over the post of International Representative for the German Patchwork Guild, I agreed and have been involved in the project since. I have made blocks myself, received blocks from others which I am now assembling to be put together. 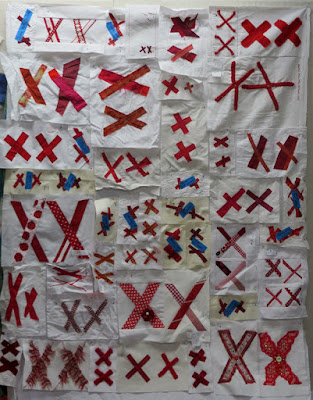 I hope I will find some volunteer to do the piecing. I am willing to do longarm piecing, and have put the first complete top on the machine, which I received from a group in Kassel. 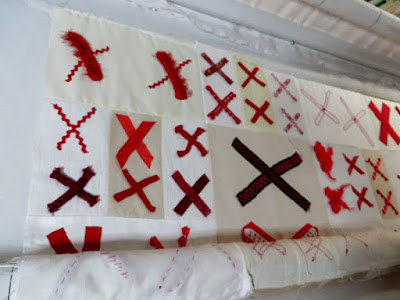 Another top is waiting in line, which Jeanne gave me when I was visiting her in August. Because my son and I included Jeanne on our trip when we were visiting friends. And we had a very good time with her and her lovely husband, "The Engineer". Thank you so much for hosting us, Jeanne and Andy! 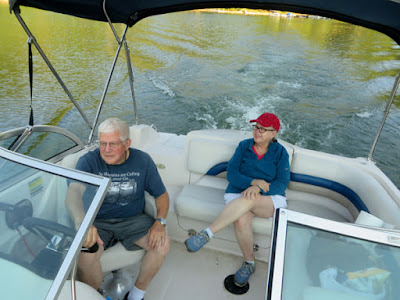 I just fell in love with the location of Jeanne's house, right on a waterfall, and slept wonderfully in a bedroom that opens right onto the stream. 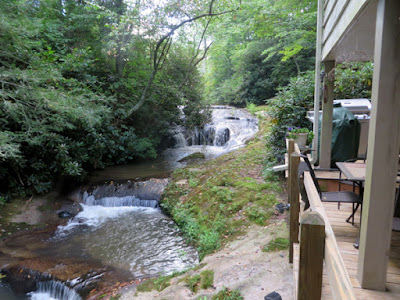 Jeanne set me to work on blocks, and showed me quilts that were already finished. 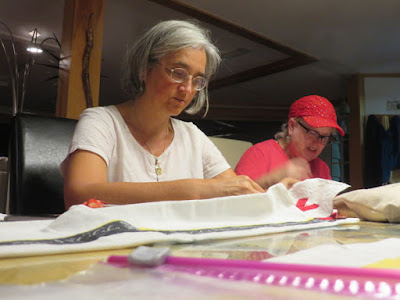 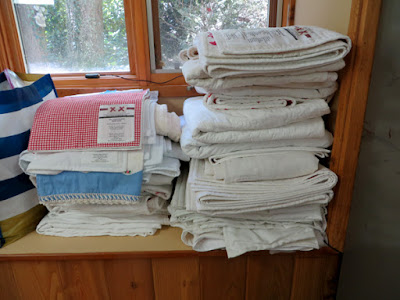 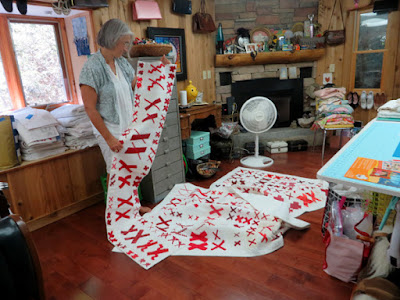 Being part of this project does something to you. I have been feeling that, although I wasn't quite clear about whether it was part of my "current state of mind anyway". A recent e-mail exchange with a woman another town in Germany who is also contributing blocks to the project, and her write-up about how the involvement in the project is affecting her, has made me realize that, however. Yes, it is partly due to my current state of mind, with the refugees and the political situation in Germany overall. But it is also due to this project.
Not only do I 'see' red x-s at unexpected moments, such as these cookie cutters at a sale in a store. 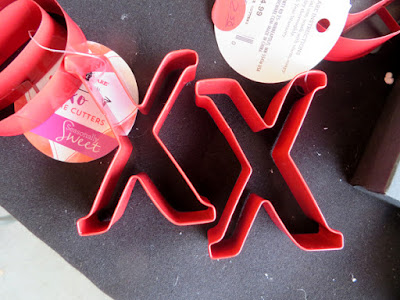 And I see them in order to have a chance encounter with Chantal from France, on the shuttle bus in Ste. Marie-aux-Mines. (See them on her name tag?) 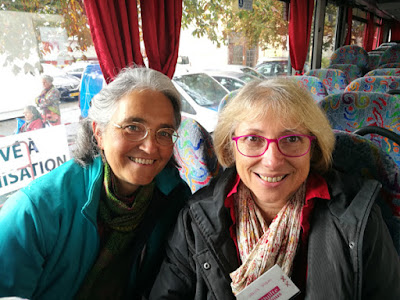 Being part in this project gives me an even stronger awareness of injustice, human rights, unfairness, etc. That in itself doesn't necessarily make one a happier person. But certainly one who keeps on fighting against injustice for longer than one ever thought one could stand it...
Posted by Uta Lenk at Sunday, September 24, 2017 1 comment:

I must admit, I kind of lied when I said 'back after four weeks of traveling', because I took off pretty much straight away again to go to the European Patchwork Meeting in Ste. Marie-aux-Mines in France. A long drive by car because of an interrupted train service with substitute bussind that I did not want to deal with, and then four days with many meetings, many impressions, many interesting quilts. This year I was definitely more impressed with the quality of exhibitions on display than last year. Hopefully the festival is on the way to consolidation after the turnover of management, which was not exactly easy two years ago. However, when I don't get around to posting something during a festival like that I figure it doesn't really make much sense posting a few days afterwards. I'd rather show some pictures of found art. Although I think probably by now I have photographed just about anything that could qualify as found art in Ste. Marie that can be found... and perhaps several times. I saw a car parked on the side of the road which had some interesting patterns of growth on the windshield and which I am pretty sure I photographed last year already, and I doubt whether it had been moved once since I last went by... 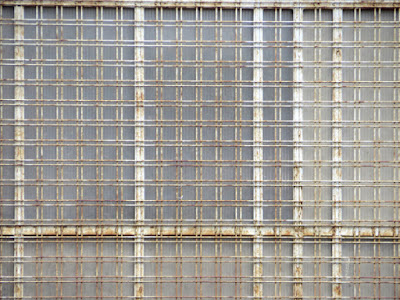 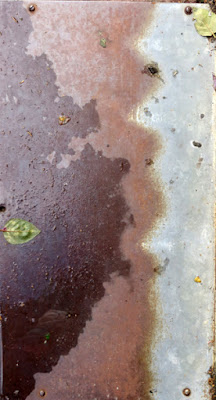 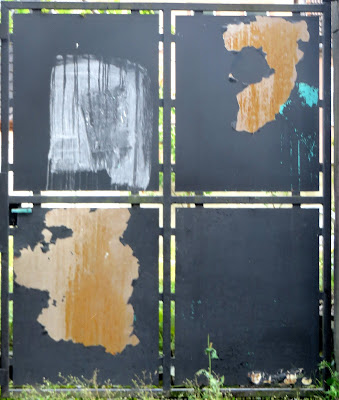 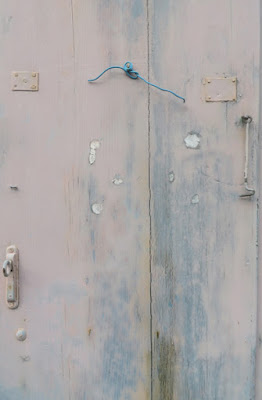 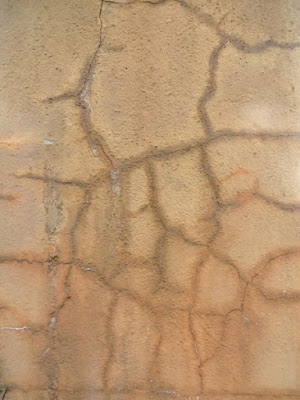 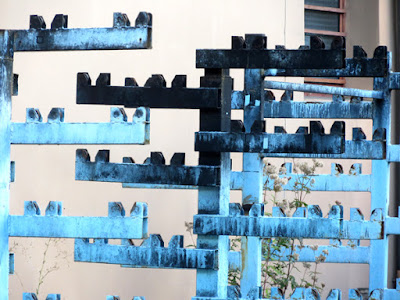 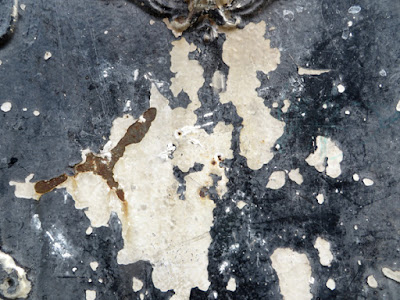 Posted by Uta Lenk at Wednesday, September 20, 2017 No comments:

Flag of the Free

One thing that always amazes me when I am in the US is the omnipresence of the American Flag. In Germany it had until recently not been very popular to be sporting the flag, and although it is slowly changing, especially in the context of sports events (i.e. soccer) people still don't fly the flag in front of their house. Add to that speaking with Kathy Loomis about what brought her to start working on her fantastic flag quilts that I got to see when visiting with her recently. And suddenly I began to notice variations of American flags as well. Not only the huge ones flying in front of official buildings and besides highway exits. 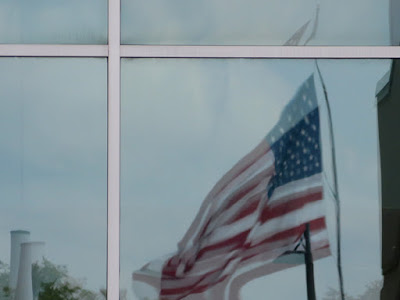 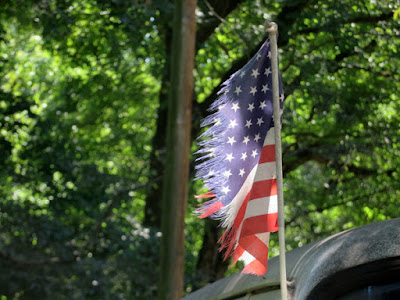 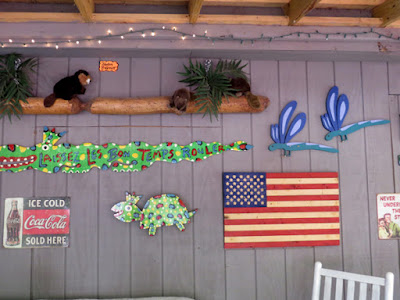 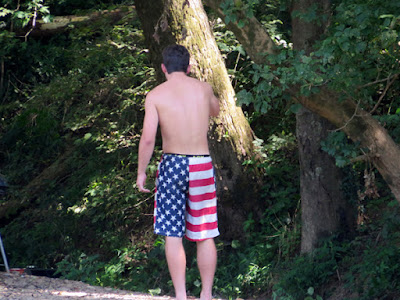 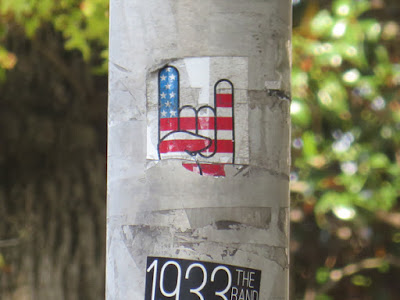 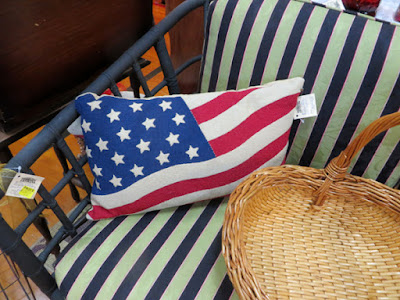 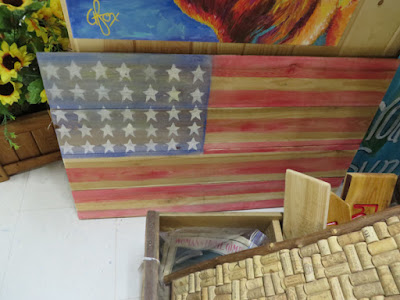 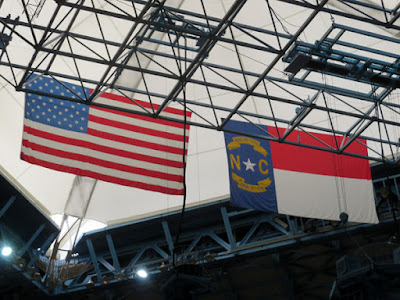 And I didn't even take a picture of every variation that I saw. Perhaps I should have. Next time...
Posted by Uta Lenk at Wednesday, September 13, 2017 No comments:

I have been away from home for four weeks, with the exception of a less-than-24-hrs stopover between coming back from the Festival of Quilts in Birmingham and leaving for our trip to the USA .
I saw many quilts in Birmingham, and a few in the USA, but I myself have not done a whole lot of stitching in these weeks. I did knit several pairs of socks. 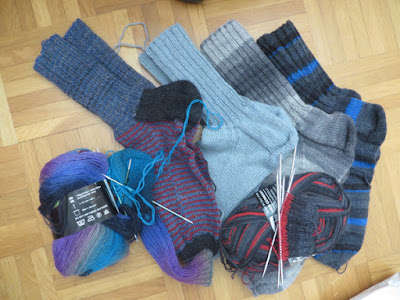 And although I had taken a bit of hand-stitching, and I did do a little bit, 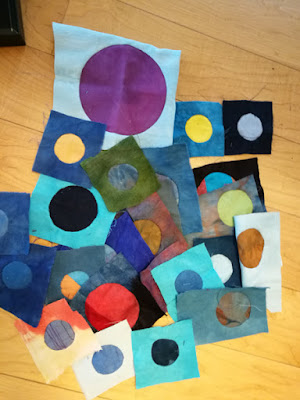 mostly it was a period of resting from stitching. Jeanne set me to work on a couple of blocks for the 70,273-project when I was at her house, and if our stay there had not been cut short due to the emergency in her family I might have made a few more in that evening we did not have. But I couldn't.

My son is at an age right now where he has very little tolerance for Mom taking him tagging along to quilt shows. He was about two and a half years old when I took him to a show in my then function as a regional representative for the German Quilt Guild, and he walked into the display hall, stopped shortly after having gone in about five meters, took a thorough look around, and said to me, „Mom, we can go!“ And he was right about the quality of work we got to see there, I have to admit... but that's is a reason why I don't like to drag him through any of this if I can help it. So I did not go into a quilt show in Knoxville that had opened on the weekend we were there. Nor did I follow any of the quilt trails that I had found flyers for in visitors centers in several of the visitor centers. There were several!
I did talk quilt with Kathy, a little bit, and Debbie, who was not a quilter when we were colleagues in Augsburg twenty years ago but has since become one, took me to the one and only quilt shop I visited during the entire trip, Stitcher's Garden in Nashville.


Jeanne of course talked to me about the 70,273-project, but it has really been a time of distance from quilting.

So this will be making a new start. I have had thoughts about new projects, I have taken a few notes. And I will get started on them as I find time.
However, the new school year is about to begin,  I am supposed to be teaching again – unless some major changes occurred while I was away and perhaps the new class will not get off the ground? We will see.
Last year's students from Senegal did not get their work permit, which has really upset me terribly and calls for further action in the realm of civil activism, protest, whatever, and I have to figure out how I will position myself to this. That is - they have not been given a permit, but they have also not received a notification that it has been turned down. This means they could not start on the beginning of September, which would have been the first day of school for them, and that means they will not be able to join in on the course any more because no late admittances are allowed. That is a very subtle and petty method of denying them access to education and training. Because they have not been rejected, they cannot protest or sue against it, but also cannot continue.
I kept pretty calm about this all while we were away – except when talking about it to somebody. The way a conversation about this usually would bring me onto the edge of tears shows me how deeply I am involved in that issue. And somehow it feels as if I can only put that to rest when a signifacant change in Bavarian politics has occurred. The fight is not over yet.
However, I will try not get as involved with the new year's students again. I don't have enough strength for that left. I will only be their German teacher.
Posted by Uta Lenk at Thursday, September 07, 2017 No comments: