Last Friday I left for Dortmund where the extended board of the German Patchwork Guild met for their annual convention. I had been looking forward to this weekend for a long time. I like the other volunteers involved with the guild, it is always a very productive weekend and as this was going to be Barbara Lange’s last weekend in her position as President of the guild it was also going to be a special meeting.

I spent the afternoon after my arrival at the office working on an article for  the magazine, and when more and more people got together in the area where I was sitting, I put the computer down and we all started chatting and being social and eventually started eating the goodies some people had brought along. Then suddenly somebody said, hey, there is a stranger in the entrance area … and then he had disappeared. And my computer with him. The police came, and now there is a lot of paperwork to be done. And I am working on getting over the loss. (Unfortunately, my back-up system was not exactly perfect, although not completely stupid, at least most of my photos are safe.) Right now I am writing on a borrowed laptop from a friend while waiting for a replacement. And vowing to myself to be better about back-up.
After that, I could not quite enjoy the weekend as much as I had expected to. Add to that injury the insult that I heard that my two entries to the guild`s triannual challenge had not been selected... which might not have hurt so much on any other ordinary weekend, but which really did not make me happy under these circumstances.
Yes, the people were just as nice as ever, and as we are allowed to do quiet hand-stitching during the presentations I got quite a bit of stitching done on one of the UFOs I have vowed to finish in the near future.

A couple of days ago I somehow touched a different button in my e-mail program and this picture of my son and I popped up at me as part of some online file. 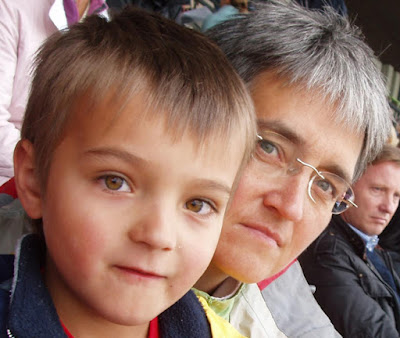 It must have been eleven or so years ago, and I do remember where we were then. He fell up some steep stairs and badly hurt his shin. I did not even know I had that kind of online file...
That little boy is now over six feet tall - still with those gorgeous eyes - and in hospital right now. Nothing serious, he had thrown up all night and collapsed in the doctor's office and was taken to hospital in an ambulance and is being observed right now. It feels very strange to have an empty house like that. Yes, he has been away before for a few days with his team, or on a school trip. But now it feels like a preparation for the empty nest already, even though it will be about four more years before it happens, and I am not enjoying the thought. That's what happens when you have only one of them, even though there are other moments when Icould smash him against the wall. So between he being in hospital, me going to visit him and trying to enjoy a few days off work I find myself in a bit of limbo. I was hoping to do some sewing but it seems to be very difficult to get into a flow. Again, I am fondling fabric as a sort of color therapy. 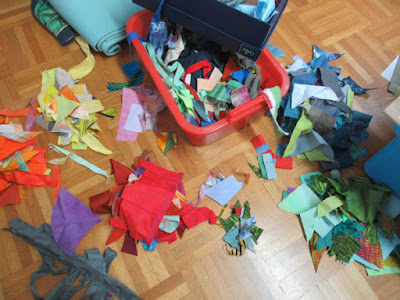 Add to that my least favorite kind of weather with a sneaking kind of cold and overcast sky that makes you depressed even before you get up... 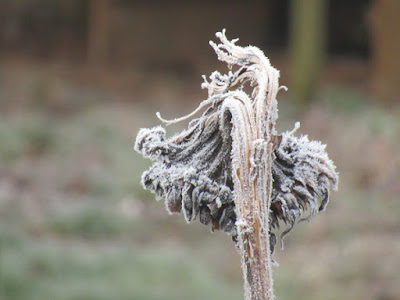 Other scrappy activities are knitting projects, including this throw blanket I am still working on. 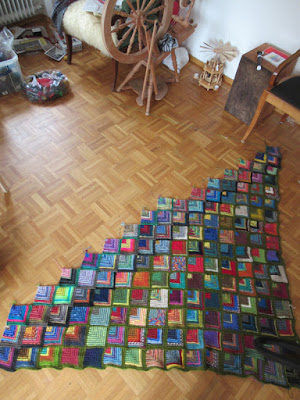 Now I think I will go to gym class and hope that that will give me some energy to go on tomorrow. The boy is supposed to come back tomorrow, too, so that should be alright.
Posted by Uta Lenk at Wednesday, January 22, 2020 No comments:

For our vacation after New Year’s we had originally planned to go and visit my brother-in-law and go cross-country skiing from there. However, not enough snow in the surroundings there, and some special reasons why we figured it would be smarter to not be around him at this time. So we stayed at home. No snow in our surroundings, either, and we ended up doing nothing much at all except for recuperating - my husband from a bad cold and a very very stressful year at work, my son from the first few months of 9th grade and being 14 yrs old, and I myself from back pains that I am trying to battle with an intensification of my yoga (which I started a year ago).

So there was time for knitting and fondling fabric and playing around. Fondling fabric is always good for times like that, even if it’s sorting scraps from ‘light yellow’ heap to ‘nearly medium yellow’ heap or vice versa. But I did not do any sorting, although there would be enough stuff that needs cleaning up and sorting, but I wanted to do something at least sort of creative.
Just after Christmas I had finally received a shipment of plastic templates from DenyseSchmidt which I had found out about, again as so often happens these days, on Instagram. Paid heavy duty on these templates, too, which somehow I had not counted on. The original price, the shipment, and now the duty - these were expensive templates to want to have!
So I have been trying them out. 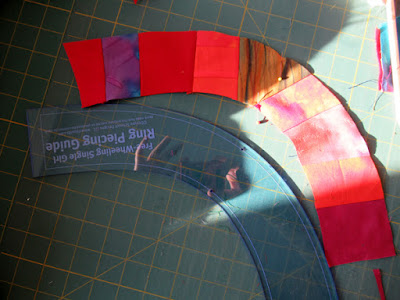 I am pretty happy with how easily the curves come together, even with minimal pinning. I had always been very sceptical about prefabricated templates like this and believed in conscientuous pinning when sewing curves that are not entirely improvisational. But these templates I really like in their usability. 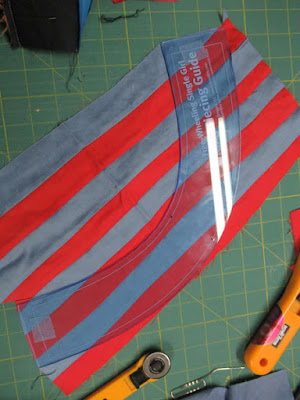 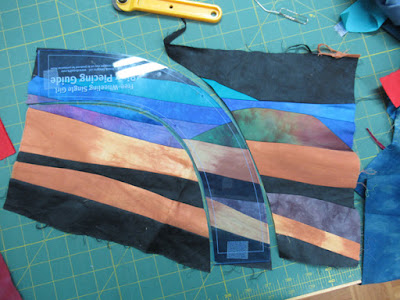 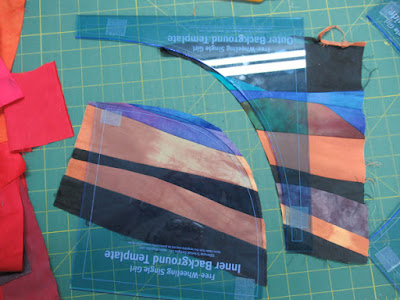 I did not like the way my original thought – lots of red – was turning out - too little contrast, not enough bling - 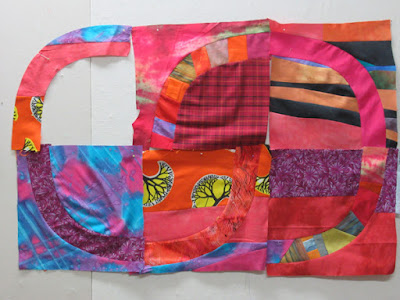 and have decided to really go for a different mode of color combination. So far there is one block finished in the newly added color, light grey, but there will be more. And I have made myself a set of small paper templates to piece the curve slightly more regular, although I do like the scrappy appearance and will definitely keep including those as well. 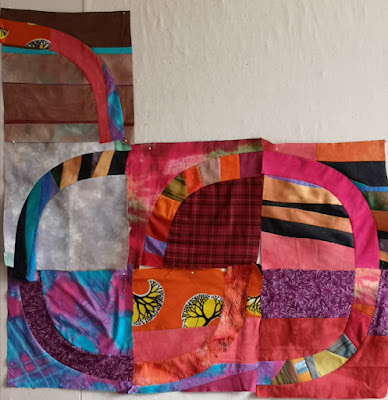 At first I wasn’t really planning on anything, only wanted to try these out as a set and figure out whether I would be comfortable about suggesting these to students in my next class, which is coming up on January 31. But now I think I will use this to try and get me back into a sewing mood. No serious intentions included, but just sitting at the machine and putting scraps together, using up some unfinished tops or orphaned pieces might be a good way to start the year in terms of textiles. After all, I only need to go back to work on Thursday.
Posted by Uta Lenk at Monday, January 06, 2020 1 comment:

Email ThisBlogThis!Share to TwitterShare to FacebookShare to Pinterest
Labels: creativity, focussing, getting started on something new, paper templates, planning ahead

A few weeks ago the instagram grapevine gave me the news that quilts of Gee’s Bend will be shown at the Turner Contemporary in Margate. A huge temptation! I love the books, 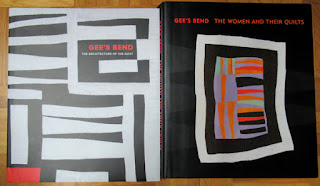 and have found especially the first one very inspirational. And I did not get to see the quilts when they were being shown at Ste. Marie-aux-Mines a few years ago, it was one of the very few times recently that I did not get to go.
And I remembered my little thing with the Anni Albers exhibition – to which I had wanted to go, even considering a ecologically sinfull one-day-trip by plane. Until I found out that that same exhibition had been shown in Düsseldorf. And I had never even heard about it. So I punished myself for not being aware of it by not allowing myselft to go. (I do have the catalogue – but I still regret not having seen it.) So this time – look at the calendar. Try to figure out… It would have been possible, take the train (not even the plane thing to prohibit a trip) through Paris, change onto the EuroStar, get off in Kent and then head over to the Thames. Chrisse would have joined me, even. It would have been possible to do. And it was a very strong temptation.
But it would have been expensive, as the train is not one that offers really cheap fares for this special trip. It would have been a hassle, because during the time when the exhibition is on I don’t have any official vacation. I don’t know the hospital I will be working at during those weeks yet, and while I have meanwhile figured out how to manage a day or two off according to my personal plans with the hospital I have been working at up to now, I can’t say how it will be there. I would have needed three days at least for the trip, and then it would have been a strenuous entertainment, no extra time to explore the area. Perhaps it would have been possible to arrange it, on the last weekend of the duration of the show, however, some uncertainties remain, and it would mean I would have been gone for my son’s birthday and for mine.
In the end I decided I won’t go. I will stick with the books. And perhaps go to Margate at some other time, with a bit more leisure to explore. It just most probably won’t be a quilt exhibition I will go to see.

Happy New Year to all my readers, thanks for following and for coming back to read. I hope I will be able to post more regularly this year than I have been doing during the last year.
Posted by Uta Lenk at Thursday, January 02, 2020 No comments: