A technological revolution happened here two days ago after my son had received a new computer device which he had managed to wriggle out of reluctant parents, because nowadays EVERYBODY goes to school with a handheld device, there is no such thing as writing on a sheet of paper, and God forbid, it cannot be assumed that healthy and strong youngsters should carry a folder with several sheets of paper in it to school. Simply not acceptable . So gracefully I was handed down a not very old smaller handheld device which I am now getting used to, playing around with, and of course I must not overstretch the youngster's patience by asking too many questions about functions and how-tos that arise with elderly non-digital-natives when they are learning the system from the other side of the digital divide...

I have learned that this one is not - yet? - bilingual. It couldn't take it that I was typing in English although the default language is German. So I shut up the autocorrect. I will learn how to use it to my real needs eventually.

So far I have also understood that there are many things I never knew I didn't need... such as a camera setting for infrared photos. Which I wanted to include here, but can't find the button in blogger right now to do so... searching ... something seems to be diasarranged with the display presentation. Let's see... 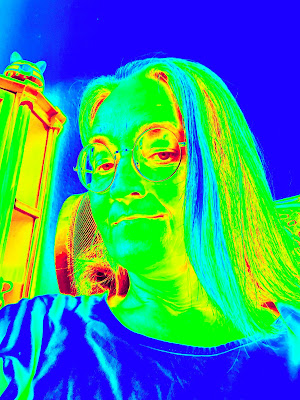 Now that worked, after several attempts.

Detail of then environment I think it was on our terrace: 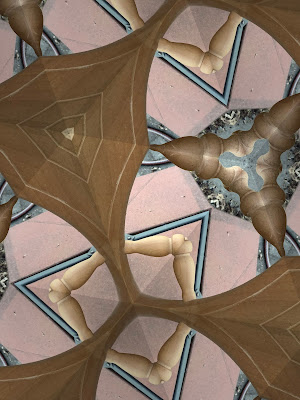 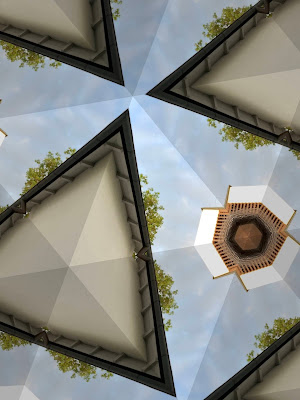 But I might develop a use for it. And the suggestions for auto insert are getting more English... we will see how often I will actually do blogger on this. It is at least a reduction in luggage weight should traveling become a possibility again.

How do you spell 'relief'?

When I had graduated from American High School and went on a trip across the country with the other exchange students, the girl from Sweden was frequently wearing a t-shirt with 'how do you spell 'relief'? G-R-A-D-U-A-T-I-O-N' printed on it.
Today I feel a lot like that, except that I would exchange the word of relief-causation V-A-C-C-I-N-A-T-E-D. My son turned 16 early in May, and as soon as vaccination was made possible for 16yr olds and pediatricians would be allowed to vaccinate we signed him up with his longtime pediatrician. We got a call two days ago, and today was the big day. 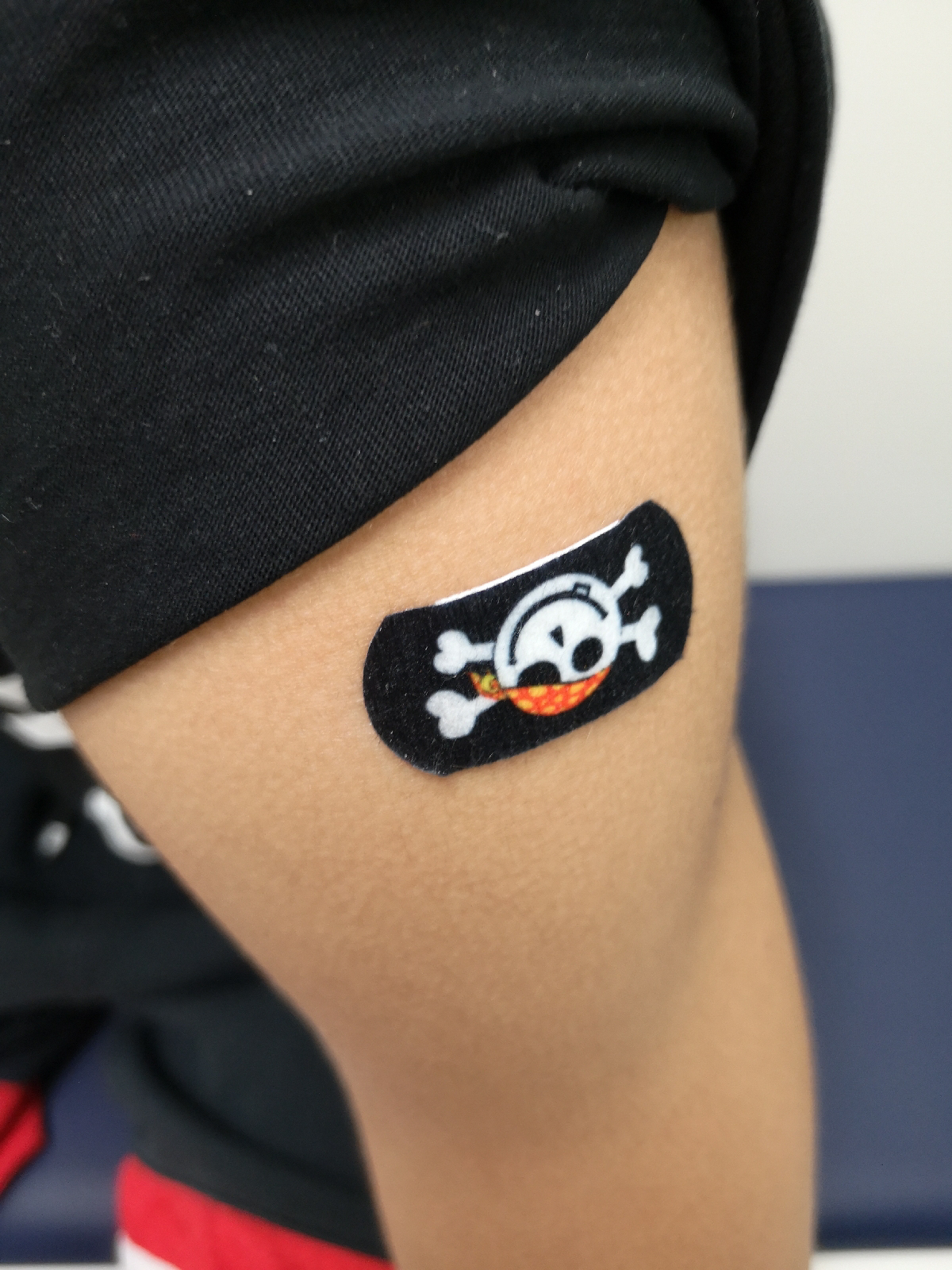 Pediatricians use kid band aids even on 16 yr olds, and never before was I so happy to see him with a band aid. Between the three of us we have received three different types of vaccines, and of course the Junior still needs to get the second dose in 4 weeks. But there's a silver lining on the horizon. Perhaps that's a good enough reason to make another quilt with that topic. But I have a number of ideas, so this one is not on the first position of the list.
Posted by Uta Lenk at Wednesday, June 09, 2021 No comments:

On trying to save a bit of money

One of the woes of May besides continued lockdown and cool and unpredictable weather was the fact that the open-air pool did not open as usual at the beginning of the month. Pandemic regulations. This pool is the biggest highlight of the city, it is what keeps me sane in summer.

Last summer they had set up a strict regime of separated lanes which I found much preferrable to the usual open pool where people just tended to swim in groups, usually making it hard for lap swimmers like me to just swim straight who do not chat with neighbors. So everybody was eagerly waiting – we have experience in swimming under pandemic conditions! And numbers of infection are going down, the map looked much better recently!

Then rumors appeared they would open after all, perhaps, then rumors sounded terrible about having to preregister well in advance and stuff like that. But on Monday last week we could go and buy season’s passes at a slightly reduced price. In other years this would be possible for the whole month of April during opening hours of city hall because the pool is owned by the city. This year, only on one day, and only two hours, twice. The line was outrageously long when I got there just after the beginning of the second set of opening hours in the evening. 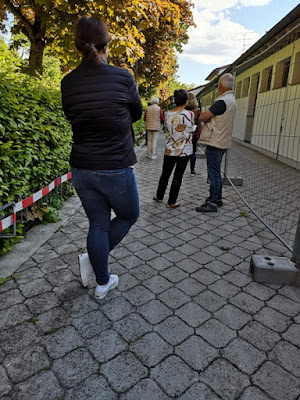 For quite a while it seemed as if the line wasn’t moving at all, certainly people were not coming out who had finished their purchase. Then people in line started to give up, which was the first ‘progress’ felt. About every 8 to 10 minutes one person would come out. If you have 15 people visible ahead of you, and you know you can only see up to a corner after which you may as well assume another 6 to 8 people waiting you can calculate how long it will take. I started writing an email message on my phone, it got to be a long message and I stopped way before I was getting nearer to the top of the line. The worst thing about it was the complaining going on around me, though. Germans can be so negative about things, and when it is rather disconcerting to be waiting in a slow-moving long line, it is even more so when the people around you are constantly going on about how awful this all is. I wish I’d brought my earplugs to drone it all out. I waited 1 ¾ hours. If you give a bit of value to your personal time spent like that and compare it to the amount you ‘saved’ by getting a season’s pass at a 10% discount... it wasn’t worth it. But having gotten a season’s pass is definitely worth a lot. Right now we don’t even need a negative test to enter. Life has become a good deal better with the pool being open.

And it is strawberry season. 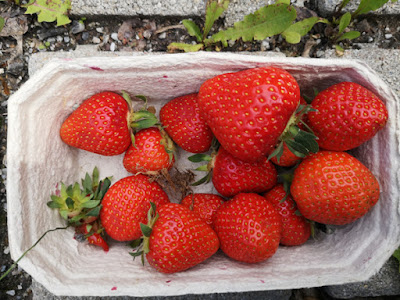 I have been a big fan of strawberries from very early on in my life. Some good things never change. 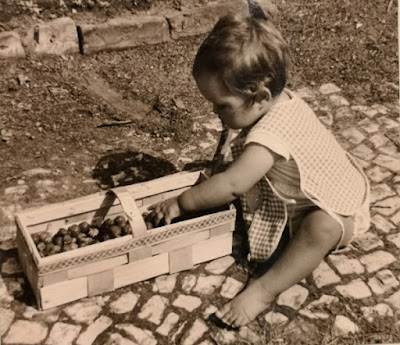