For a while I wasn’t sure, didn’t have much of an idea. But with the history of a dozen continuous contributions it is simply not possible to take a gap year. (Nobody said so, but expectations to oneself...)  Because of the lack of ideas thought I might just send in a piece I had made during the early days of the pandemic, working towards a topic as given by the monthly challenges for the SAQA Europe/Middle East group. I had started full of enthusiasm to participate in those challenges, then the work that needed to be done for the completion of the nursing course took over, my disorientation over Covid could not be overcome by participating in such challenges, and I petered out. I only made this one piece towards the challenges, and I didn’t even post it on the appropriate facebook page, I think. It’s called ‘Home’, and it is a graphical arrangement of the letters that make up the word in English, abstracted, from the outside to the inside.

But somehow I wasn’t satisfied with sending this one as a contribution to the auction and kept putting it off.

Only a couple of weeks before the deadline for signing up a piece to be auctioned, and, more importantly, for sending it, I finally had another idea. I had been collecting some of the plastic debris I was dealing with while I was working in the OR. I know I can’t save the world by not throwing away these plastic seals for the containers of operating instruments, because there is just too much. I figured I would eventually know how to put them to use, even though it isn’t exactly easy to find a sensible use for these. 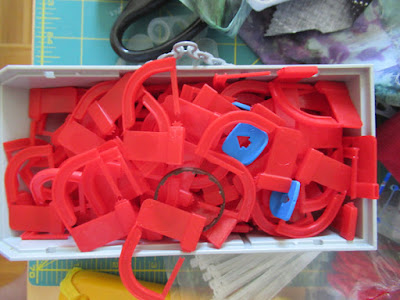 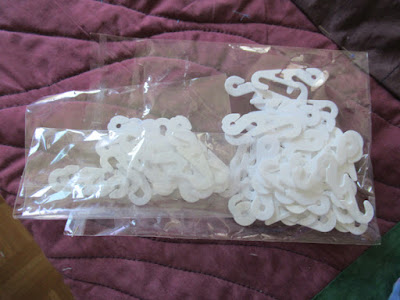 And a piece of self-printed fabric that was lying around and waiting to be cut up. 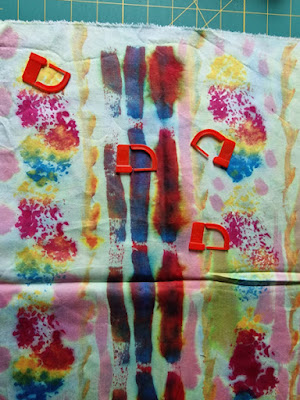 The idea arose from the multi-faceted conglomerat of the political situation in Ukraine/Russia, weapon shipments, lack of a sensible solution and my growing frustration and hopelessness about it all. Although of course the effects on the people are everything but, the whole thing seems just like a game of tic-tac-toe, undecided, and who is going where? 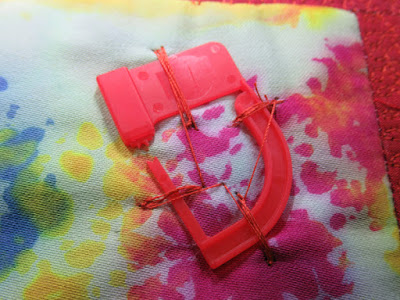 By now I have heard from Martha Sielman that my piece has arrived and will be up for auction in September. You can view all the pieces submitted here.

A slightly easier way to see them is here.

The auction will be online from September 9 through October 2.

The other day I awoke after a hot and rather restless night with just a memory of a snippet of a dream hovering in my mind. I had been told that “o(round)moon” had been nominated for the Nature Award. 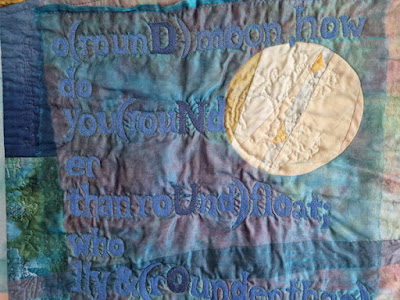 No clue who was giving this award, where this would have happened – nor did I find out whether anything came of the nomination in the end. Of course, this lingered, because I don’t frequently remember my dreams.

The quilt was made for SAQA’s exhibition “text messages” several years ago, traveled with that exhibition for three years and is, I have to admit, one of my all-time favorite makes. It has been quite a while since I made it (2013!), and it must have been on my mind because of a new project I have started with Barbara Lange, 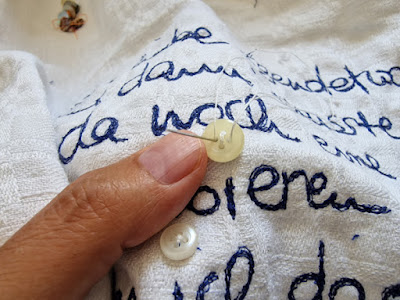 which in turn made me remember the important role this particular quilt plays in the conception of my series “text messages”.

When making it, I realized that several quilts that had gone before also had a topic of text messages. This one, although it was the first one to actually receive the title “text messages” was no. 8 in a whole “new” series!

I am currently also turning ideas in my head about the piece for the next 20 Perspectives’ challenge, which has the broadly stated topic ‘nature’. 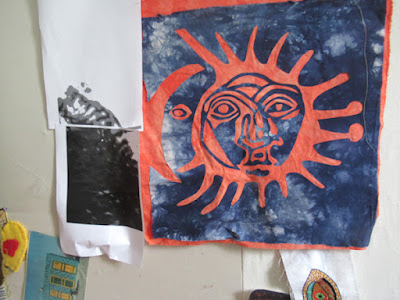 Quite possible that’s how the whole combination came about. I will include o(rounD)moon in the exhibition I have here in my town in October. And quite possibly the Nature-inspired one as well.

The past few days I have spent a lot of time on our terrace, either resting (sometimes reading) in the hammock, or sitting in the shade of the magnolia tree, spinning along with the Tour de Fleece/France. I look like I have been on holiday and not like I have been recuperating. I actually did get quite a bit of spinning done, it's not even the second day of rest on the tour

and I have spun far more than half of the whole batch of fibers I started out with, and at that point I wasn't expecting to get much done. My goal when I set out was 'spin a little bit every day'.

The cough is slowly getting easier, but thanks to my kind of job I had the 'pleasure' of being subjected to a second pcr test, after five days of quarantine, which was still positive. So I get to stay home a few more days. What a perfect way to start a new job! My boss is going to love it....

Personally, I think it is completely right to be tested again, but current German regulations are different for 'just anybody' and for people working in health care jobs, and that really upsets me. There must be many more people out there who are still positive after 5 days of quarantine, and they just get to leave the house, return to their normal life - thus endangering everybody whom they meet on the street, because mask wearing is not mandatory anymore either. Health care workers, however, get tested a second time, have to stay home longer - and when back at their job, they face the danger that all the other people are posing form them while doing their job. I don't think this is fair. And it certainly can't be what health experts would recommend. But... I wasn't involved in any of these decisions. I know I would not be good out there working all day in my current state, but I feel so much better that I can take the active decision to enjoy these unfairly allotted free days. Of course, there is still more spinning waiting for me, but it won't be the only fiber activity I will turn to.

As a little treat to myself, at the beginning of my quarantine I gave in to a craving I had felt for a little while. On Instagram I follow @visible_creative_mending, and for a while I had been considering getting her book on techniques of meding. Of course, I know how to mend, dating back to my grandmother's teaching and my mother's book of handicrafts from way back then (the first edition came out in 1930, although my mother's copy is from 1954 - perhaps it would be an interesting topic for a research paper how that book changed during its lifespan from the beginning through the years of Nazi-regime in Germany, and how it was used to influence girls' lives... but that is just a thought on the side, and I would rather just make and stitch instead of following up on it). 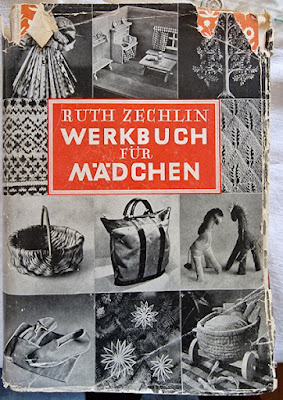 I also have Rodabaugh's book which I bookreviewed for the Guild's magazine a few years ago. 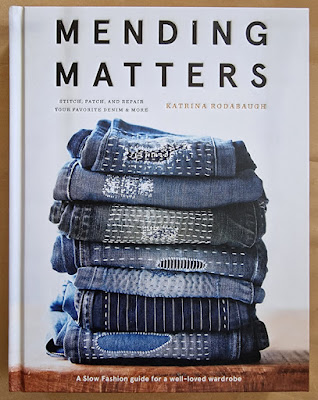 And I have been showing some of the mends I do, so this was a mere fancy to treat myself during illness. As a matter of fact, I had been through the first steps of ordering in the online shop, up to the moment when shipping costs came up and I was confronted with another of those unpleasant side effects of Brexit. For one thing, a price of £28,00 is, I think, quite costly for a book like this. But add to that another £ 11 for shipping... at first, I balked at that and was sensible and told myself 'that is quite a lot of money for something you basically know how to do', and refrained. But, with illness messing up my thinking I did go ahead and order it. 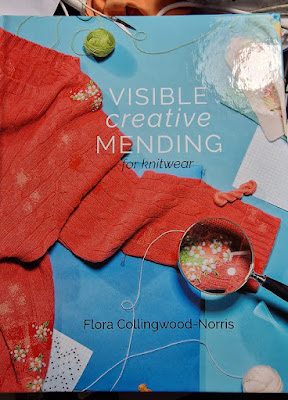 Yesterday it arrived. Not only is it small-ish, definitely small for a price like that, but German post has once again given me the pleasure of 'treating it through customs' (worth €3.45), and for the 'lending' of this the postal service adds a service fee of €6,37 or something like that. So I had to pay an almost extra €10 to even lay hand on this... I do call that paying dearly for a lack of resistance to temptation.

It looks like a nice enough book, but definitely not worth that much. Hopefully I will be more careful before ever ordering anything again that will arrive from outside EU borders. 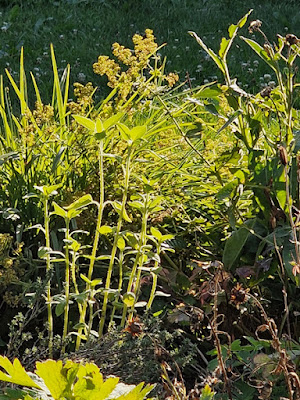 After two and a half years of ever prolonged lockdown periods, wearing face masks either all over the place, but definitely at work all the time, three shots of vaccination, being prudent and careful, months on end of social distancing and lack of contacts, a deeply felt lack of cultural input because so much wasn’t possible, recently offending people by single-handedly (excuse the pun) trying to change the unhygienic habit of hand-shakes as a greeting the virus has caught up with me. I sort of was expecting to catch it at some point sooner or later, and I am relieved that it happened now, and not a day before we are planning to go on vacation in August. But...

Not sure whether I got it from that colleague whom I hugged (without a mask) when saying good-bye at the OR (but the scratchy throat started that evening right away and she was reported sick only a few days later, so perhaps she caught it from me?) The unfortunate part of it all is that I had only four days at the new job before I was tested positive, which, of course, is not exactly what an employer wants from a new employee. But what’s there to do in a pandemic?

The test result had come in on Saturday, and the weekend was terrible, because I did not have any medication to deal with the coughing. That has changed, and at least I am not coughing my guts out anymore. Weakly lying in the hammock for long stretches of time, 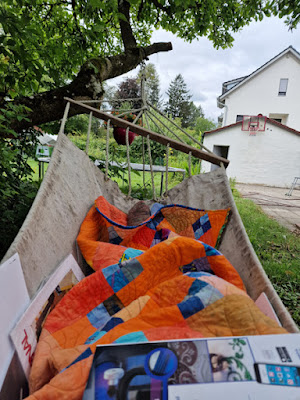 but every once in a while I gather enough strength to spin along with the #tourdefleece2022.

I am spinning a fine thread, so the project will take a while, but I have spun almost 50% of the sample pack I started out with. In the end, I will need a thrid thread, though, to make it a good 3-ply, I will be working on this longer than the tour, even though I plan to spin along until the end of the month, including the Tour des Femmes as well. 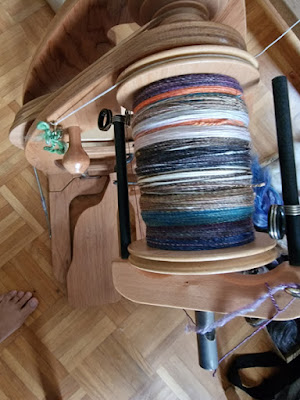 That’s not too exhausting. Thinking hasn’t been possible, but perhaps the next few days will show a bit of improvement.

I watch my flock of chickens,

look up at the leaves of the magnolia and wait for the world, and my cough, to improve.