Putting myself back in normal life again... 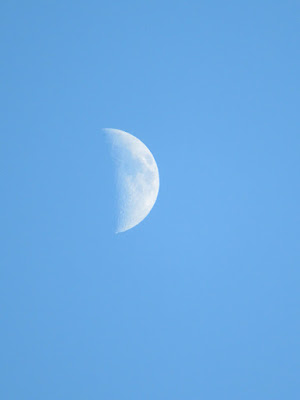 Two weeks with important dates have passed recently. Three days of written exams for me, and a few days later the oral examination. Only one more part of the exams and then a few weeks of waiting for the results, until the middle of September. Of course, that is a long wait, and several people have told me that that is not exactly according to German law - we should be given the results of the overall performance after the oral exam and then be considered a fully qualified employee. But the virus has influenced all this, normally we would have had to wait for the final oral exam until the middle of September, and then it would have been in accordance with the law. But I don't really care about that right now - I am not really worried that I might not have passed, so I can wait after that practical exam is over coming Thursday...

Another important date was last week's graduation 'ceremony' (very minimalistic) for my Senegalese friend and foster son which I got to attend on the sidelines.

Much to my own surprise I did not start crying. I thought I probably would, but I kept my wits together. What a ride it has been - and a practicum is around the corner, which might be an entry into a well-established firm of mechanical engineering, thanks to connections, we will see...

My son finished 10th grade (he is one of the students who profited from the virus and digital home schooling, at least in terms of grades) and immediately entered a bus that took him and his basketball team to Berlin where they are playing a small tournament. The parents are a bit worried about the infection situation there, which is not exactly optimal, but he was safely two weeks after his 2nd shot. Although ... no, I just hope they will be cautious and nothing will happen.

After my own exams (well, two thirds of it) I can safely start clearing up my desk, don't need to do all that studying anymore. But it is taking time to get back into a state of mind of some kind of normalcy. I find myself sitting around a lot, doing nothing, and the urge to get creative is still mostly focussed on 'making' rather than being truly creative. So I am finishing knitting projects to fulfill the self-imposed rule that I need to finish at least a part of what used to be approximately 6 or 7 unfinished knitting projects all over the house. I can tick of 2 - a pair of socks using up remnants (the pair in the top of the picture): 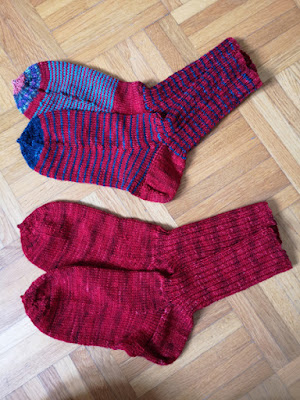 A sweater made from handspun yarn, 3-ply. 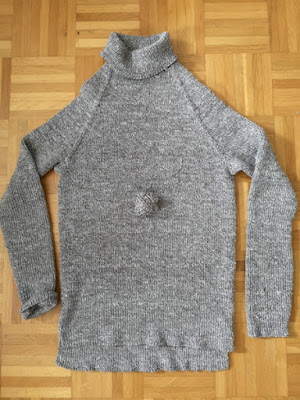 And I am getting closer to the finish line with this sweater for me. I think after that I am allowed to swatch a bit and make up my mind which of the zillion combinations of yarn and designs I have been pondering I will actually start. 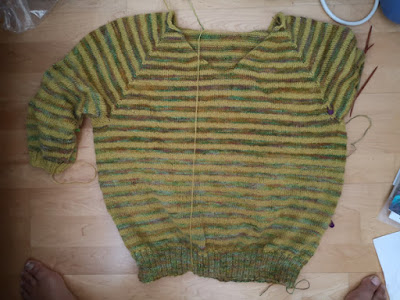 And spinning a wonderful silk fibre, which turns into a meditative activity that is keeping me occupied. But because the thread is very fine indeed it is taking a long of time, too. 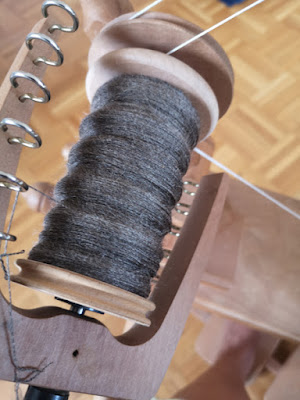 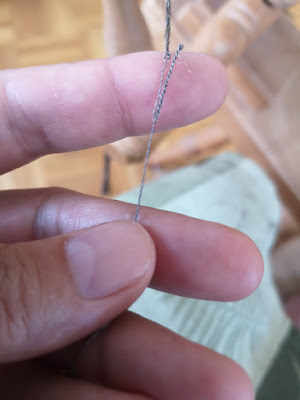 I have been adding some more to the weaving piece on my design wall which I started for the SAQA regional zoom meeting. It is growing, but it is also still brewing. Not quite happy with the size right now. It will come. 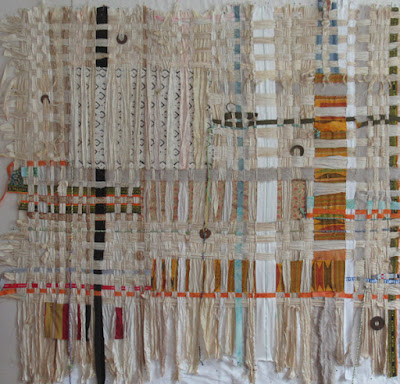 Of course, this weekend I am thinking about the Festival of Quilts in Birmingham, which I couldn't go to first because of the exams, and secondly because  of the virus and quarantine restrictions. I am hoping it will be possible again next year.

It is that time of the year – berries in abundance. Despite the fact that I have been shamefully neglectant towards my garden (“I will start doing it all when my exams are over!”) it is offering me a bounty of berries harvest. 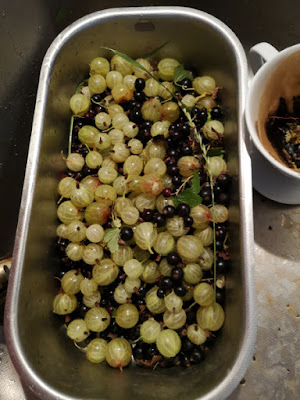 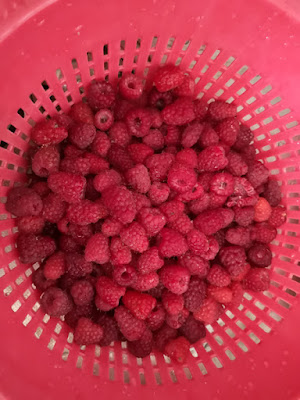 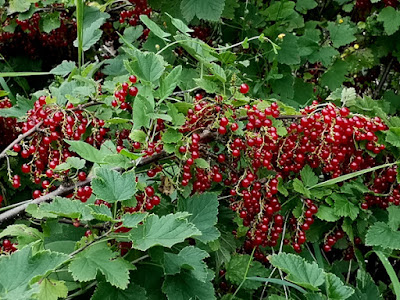 I started working on it last week with white and black currants, gooseberries, the first, early red currants bush. 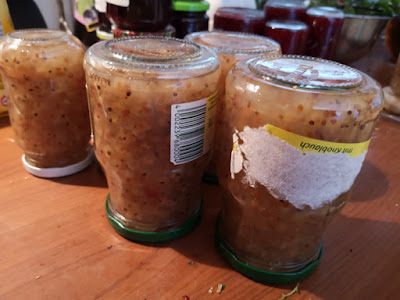 I even had some helpers, one completely voluntary and eager, the other had to be enlisted but has been attentive about this since. 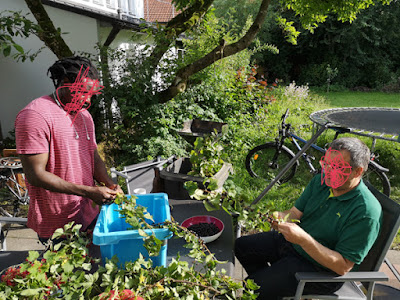 Now the other reds are very ready to be picked and although I would have preferred to be able to defer it for another ten days – which isn’t possible at all, and they are clearly later this year anyway – I got started on them yesterday. The abundance makes it necessary to spend hours, and I don’t really have that time right now... but at least I got started. And found myself meditating over the berries, the past year, developments, options.

This past Tuesday was a weird day. And a good day. I am not going to talk about the weird part. But I want to mention the good part. Over one year ago I posted about the Senegalese whom I have been fostering for almost five years, and who had won a seemingly small but very important victory in terms of his status of residence in this country. (One of the helpers above.) The story of course continued, because he had to procure a passport, which he then needed to hand over to the authorities. Several months later he did just that, and now, a few months later still, he has passed his final exams in the technical school that he is attending. This was not his first choice in terms of professional orientation, but the only option to take – a purely vocational school, for this he did not need a work permit to be allowed to attend. Germany typically has a dual combination of vocational school with a section of professional qualification in a business. For this, however, a work permit is required, and his status of residence prevented him from getting that permit. That was the reason why he was not allowed to start training as a hospital caretaker four years ago at the end of the one-year preparatory class in which I taught German, and where I first got to know him closer.

Imagine yourself, in a strange country, having to learn the language, and authorities are constantly trying to demonstrate to you that you are not really wanted here. Going to school under these circumstances is hard, going to school in a field that wasn’t your personal choice, is even harder. And it is a tough school, as it competes with the dual mode of training and has to prove that the students are equally qualified at the end of the course. I admit, there were times when I was afraid it might have been too difficult a school, but there were good times when I was confident he would pass. I enlisted another helper for the technical lessons, I covered tutoring for German, English, social sciences. The exams started at the end of June. And the results were given out on Tuesday. I am so proud to say that he passed all the written exams, it is not necessary to take an oral to make up for a bad result. He is in fact going to take a voluntary oral exam to try to improve one particular subject, but it will not be counted against him, he has passed his exams. Now we need is to get the written work permit, and then there are options for him to find work. These are almost five long years of ups and downs coming to a good conclusion. We are almost there. 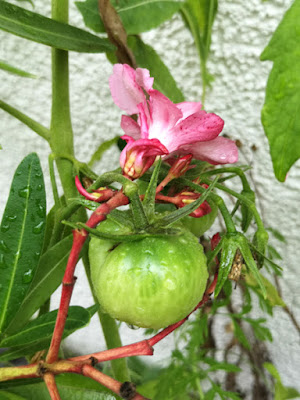 In accordance with my family of origin's history the Olympic Games have always been a presence in my life. For many years I would watch a good part of the coverage if possible, although over the last two decades I would probably choose to go and exercise myself rather than watching some competition on TV.  Last year I was all in favor of postponing the Games due to the pandemic, and I am very much in favor of Japan's recent decision to ban visitors from the stadium. The soccer European Championship has shown how unwise a decision it has been to permit large numbers of spectators, numbers of infections that are traced back to those soccer matches are terrifying. Is this what we all have been making sacrifices for? Yes, we all want a normal life back. But is this what we want - another season of lockdowns after a few soccer matches and a week on the beach? I am appalled at the recklessness of people who are now complaining that their holidays in Spain may have to be followed by two weeks in quarantine. What did they expect?

I had a furious husband to deal with this morning, he is fearing that a canoe building course he has signed up for in September and which would be the first thing for him to get him 'out' since March '20 (at least nine interesting concerts he wanted to visit have been canceled, and some of these won't be refunded) and he was threatening to get really mad if that course would have to be canceled because everybody now wants to go back to normal and caution is being thrown out the door. I have to say, I was rather helpless - of course I understand his frustration. But why yell at me...?

I have had very busy weeks with studying for the final exams that are coming up week after next, so not a whole lot of stitching has been going on. But I did receive note yesterday that my SAQA benefit auction piece indeed arrived on time. So I can now show a picture of it here.

I also started a new piece because the SAQA regional zoom meeting on Monday is going to be about 'what's on my wall right now', and I was the one who suggested that topic. So I figured I needed to be able to present something myself. Since last year's benefit auction piece I have been meaning to take up that method again, weaving those strips of silk as I did for the small piece "Love. Protect. Repeat." as was shown here. It hasn't really progressed terribly far yet, but I like the way it's going, and that it is taking on a life of its own. I put in pieces of African fabrics that had been biding their time, and there is a bit of brocade I bought in Jerusalem, Old Town, sharing it with Yemima. Too precious to cut up, but it will be a wonderful addition here. 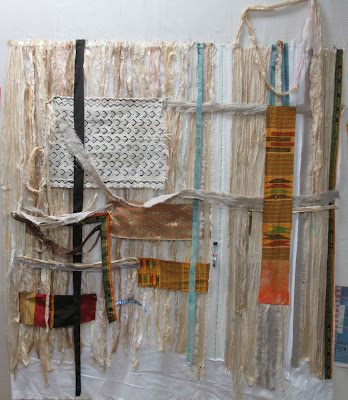 Looking forward to see how it will develop.