When I was eight years old my family spent eight months in the United States, and towards the end we all boarded a huge white station wagon, toured the Southwest, and ended up in Los Angeles. With three kids in tow who had been taken hiking the canyons, visiting pueblos and various National Parks, a visit to Disneyland was part of the program before we were scheduled to fly home. (It wasn’t as big then as it is now, from what I gather from the website.) 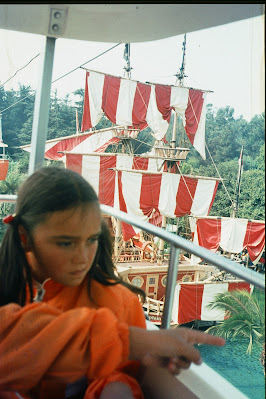 And I LOVED the pavilion ‘It's a Small World’,

and sang the song for years afterwards (we had bought the illustrated book with a blue plastic record). My parents must have suffered....

Just before this past Christmas I realized that I had never heard from SAQA during the Benefit Auction about my donated piece. I checked the SAQA store, and sure enough, there it was, my piece ‘Who Wins in the End?’ still waiting for a buyer. 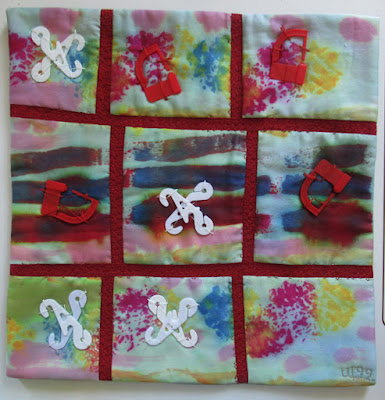 I thought that 2022 might be the first time in all my years of SAQA membership and benefit auction donations that my piece might not find a new home. Kind of frustrating that was, indeed. But only a couple of days later I did receive the message that it had been sold after all – I wrote back to receive the contact information for the buyer – waited for a reply – then finally received the information and sent a thank-you message a few days later. I wrote in English although the first name looked to me like a German spelling.

I thanked her for buying it, and that I was happy it had found a new home in California, because I had spent time in Santa Barbara, and this gave me a new feeling of connection to the state. And a couple of minutes later I received an answer in German. She was thrilled to not only have a quilt of mine now, but a personal mail as well. And she told me that we were ‘connected’ in another way already - she had been told about me from the buyer of her parents’ house in northern Germany, for whom I had quilted a special quilt at some point (when I was still selling fabrics and trying to start being a commercial longarm quilter). That house, where he now lives, is not too far away from the town where my grandparents lived for many years and where I spent my childhood summers. It’s a small world after all.

And about time to think about the next Benefit Auction piece.There's a tradition to uphold by now.

A sort of planned post from almost long ago: 'Exhibition is on'.

The yeat is 2023, and although Life 1.0 took a precedence over creativity for a while and about 1/17th of the year is over, i.e. we are already facing the next Christmas again... I still want to publish that post I had written about my exhibition in October. This is how far I had got, and I will not correct or add or alter anything just now:

Saturday was the big day, the opening started at 10.30 a.m. I was touched by how many people came. The mayor was there and gave a speech, making it her personal matter to celebrate that two recipients of the city's 'Culture Prize' - the museum and I - had teamed up together like this.

A lot of interested people came, some friends, and it was a friendly and open atmosphere. 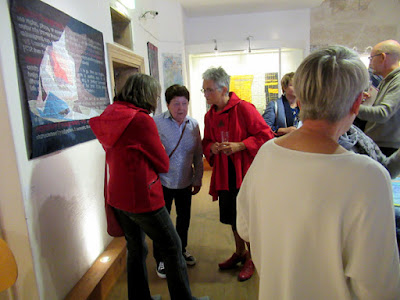 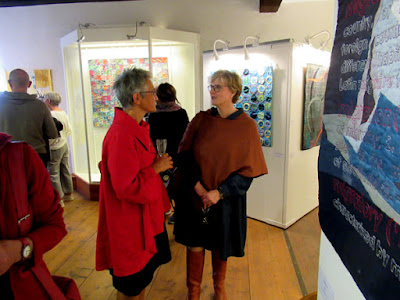 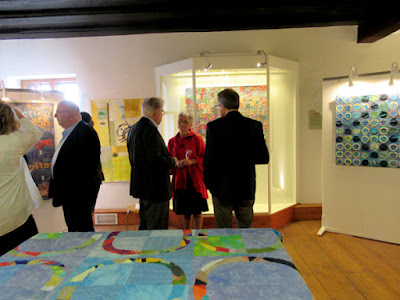 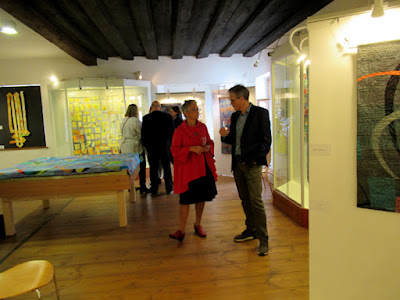 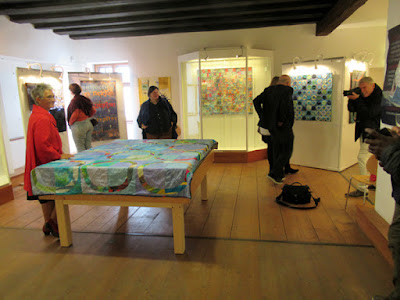 As I said - I won't alter or add... although it is by far not as developed as I had thought it was... I will just go on with life!

Because now two quilts that were shown in that exhibition have exciting things happening to them.

One quilt has found a new home, and the new owner is so excited to have it displayed above the sofa in her living room.

And the other one has just been juried into the German Patchwork Gilde's prestigious exhibition "Tradition bis Moderne" and will be traveling to at least 8 different venues throughout the next two years, including a stop at EPM in Ste. Marie-aux-Mines in September.

I had entered two quilts to be juried, and this one was my 'I hope this one gets in!', so I am very happy about this success. Sewing these scraps grounded me during the first Corona lockdowns, while I was listening to 'Pale Rider', and now it has turned into a successful entry, it was a good start to the year.