Things on my table and my mind (Diary of recovery)

A couple of weeks ago Germany talked about the fifth anniversary of Chancellor Merkel’s famous words “Wir schaffen das!” (we can do that) which marked the beginning of one million refugees pouring into the country.  Although she  had only meant to take in the twenty-plus-something-thousands that were waiting at the Bukarest strain station at that time. The recent commemorations all tried to analyse what was right about that sentence or what Dr. Merkel had done wrong, give reasons for this and for that. But that's already over, by now we are in the midst of discussion rounds about the 30th anniversary of German reunification – what went wrong, what was right, who was robbed of what, what was good in the GDR, are we really one nation, one people, … Germans seem to have a severe urge to discuss everything to shredded pieces these days, and in a negative way. Constantly journalists are pointing out what went wrong, what could have been done differently. It never seems to be worth to talk about the positive sides of things. How well many things went with one million refugees, many of which are working now.

This attitude of talking things to death negatively is not a healthy way to deal with matters of importance, I think. But seems to be a very German approach, unfortunately. (I still think that Angela Merkel’s sentence was one of the best things she ever said, but the reaction from the then Bavarian Prime Minister and now Minister of Interior Affairs and Security spoiled it all, broke a barrier and made all the problems with right-wing extremists that we are experiencing now, possible to begin with. But I am back to trying to keep this a blog without real political issues. So no more on this.)

Definitely, these two anniversaries right on top of each other are a strong indicators, yet again, that time flies. (In a former life of mine, when I was still a linguist, this phrase would routinely draw up one of the insider jokes that live in specialist groups: “ Time flies  …. like an arrow. And fruit flies like a banana.”) I haven’t written a post in a while, but I have been continuously composing them in my mind indeed - and the longer I hadn’t written, the less feasible it seemed to come up with something coherent about stuff that is going on.

I have been to see my mother after several surgeries. I have had two wonderful weeks in a section in the hospital where I could indeed imagine myself working, if they have an opening starting next fall. I have had several rather unpleasant weeks in school, but I am counting down and there is not that much class time left to endure before the onset of exams coming July. Less than 80 days, in fact. And that is a positive things.

And I am working on this and on that. Quite a number of works in progress, each of which is biding their time, gets a bit of attention now and then and then has to recede to the background while others are being tended to. But the attention span is again on the shorter side, with worries growing again about increasing numbers of infections, demonstrations 'for liberty, against masks'... Who on earth can come up with such a stupid idea that a mask is meant to shut the population up?

The quilt I sent off on its round of entries (see post here) was already rejected once, Schweinfurth did not like it, and although I had thought it would not matter, I was a bit hurt and considered pulling it out of the circle. Originally, I had thought I would enter it for Quilt National, and Schweinfurth had just been an additional opportunity prior to that. “Forget entering”… just do my stuff as I like it and don’t bother to present it to the quilting world. But my good friend Barbara Lange just in time asked whether I had entered something for QN, and convinced me to give it a try by telling me that one quilt of hers had been rejected by the jury for St. Marie-aux-Mines but then been accepted for QN. And this conversation took place before the deadline had gone, I then really remembered to send off my entry, entry process worked easily without any problems and now the yellow scraps are waiting for their next verdict.

I have taught an online class twice in August, in the overall context of the Patchwork Gilde’s summer academy and have started preparing another on for November. It is not my favorite way of teaching, I must admit, and I am very glad that real teaching is coming up for me again in two weeks’ time. But the participants were so grateful and happy that things were happening, that they got to learn something new. Some of them even said that these new methods had given them more opportunities to participate in workshops or classed than they used to have before because they would have never been able to go to any of the ‘far away’ places where workshops are being held. They prefer having their fabrics close by, and even if a teacher out of a computer is different from a teacher on the premises, they were just glad to be sewing ‘in company’ and learning something as well. Which convinced me to pick another subject, aiming at a different group of expertise in quilting, and be a part of the ‘staff’ for another online-event the Gilde is planning for November.

I have also started ‘planning’ a quilt. 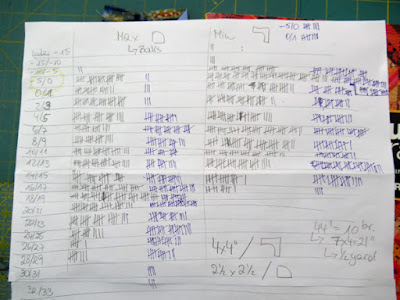 Which definitely is not my usual mode of production. But as this post now is beginning to be a bit of a rambler, I think that will be a topic for another post in a few days when planning has progressed just a bit further.

Posted by Uta Lenk at Wednesday, September 16, 2020 No comments: