We never learned a whole lot of history about Asian states in school. Before the Soviet invasion in Afghanistan in 1979 I might not have known this country existed, but the following discussions about a boycott of Olympic Games in Moscow certainly showed that this was not a country without significance. I still don’t know enough about Afghan history before, during or after the World Wars, or about developments that led to the war-torn situation we have now, and trying to find out something about it with the help of a traditional encyclopedia is not helping me in this. I don’t think I will try, either. But yesterday’s picture of advancement of Taliban control of the country in the paper, the news we have been hearing ever since the US decided to pull out, and other NATO troops followed suit, and the stories I have heard told by my refugee friends from Afghanistan are heart breaking.


I have made two quilts with Afghanistan as a topic. One is called “Imagined Dialogue” and was the quilt I would have entered at Ste. Marie-aux-Mines if I had managed to keep track of entry deadlines. As I checked back through my blog on the entries with ‘text messages’ it seems I have never shown it here, although I had notecards printed with it. It is a combined text, based on a few lines from John Lennon’s song “Imagine”, and a few lines from a poem by German playwriter and poet Bertold Brecht. I edited the lines slightly, and juxtaposed them, turning it into a kind of dialogue between the two voices. Brechts’s famous poem starts with the line “Imagine there is a war and nobody goes there”, and was frequently and wrongly cited by peace demonstrations in Germany in the Eighties. Cited wrongly, because the second line continues as “then war will come to you”. In fact, the whole poem is a call to action, though not necessarily to military action – if you don’t do anything about a situation, that situation will manifest itself and take control, instead of you taking control.


The second quilt with Afghanistan as a topic is called “Thinking of Nasrin”. It is based on a piece of cloth I had bought from Pascale Goldenberg which she had brought back from Afghanistan on one of her trips there to keep the Guldusi project going, and three of the embroidered squares that Afghan women in a particular village embroider. All three of these squares were made by a woman called Nasrin, which led to the title.


Of course, I never met Nasrin, or saw a picture of her, as she is not mentioned in the book that Pascale Goldenberg published about the project. But I was thinking about her a lot while making the quilt. And I am thinking about her, and all the other women in that project, and the mothers and sisters of my Afghan refugee friends here who stayed behind – what will happen to them now? How will their life change?

For a while I had thought that these quilts had been left behind by history, they did not seem of current interest anymore. That has changed significantly.

I don’t understand what is going on there – but somehow it seems that the Western troops have deeply wronged the people whose country they were supposedly liberating for the last 20 years. I never thought it was right the way it was happening, but certainly this recent deal in the whole story seems even more wrong than anything that went on before. The troops are leaving behind many helpers who worked for them during the past 20 years, and they will not be protected. Germany even still deported Afghan refugees until a couple of weeks ago – it was only last week that deportations to Afghanistan were stopped. Perhaps another quilt with an Afghan topic may be brewing. I still have some eye-formed embroideries by Guldusi women, hanging on my design wall, biding their time. 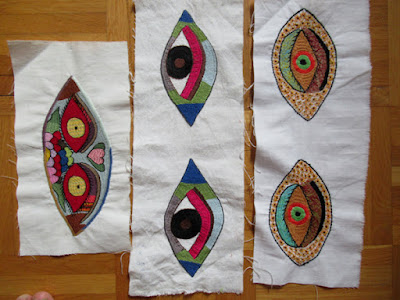 What a sad sad situation. (Not to even start thinking about the many people who will flee the country, increasing the numbers of refugees whom the EU didn't want to have...)

Thursday this past week was the big day.

The final part of my exam procedures, a three-hour practical exam with a set list of nursing/caretaking activities plus some extras, two examiners looking over your shoulder.

The staff on the ward put up a poster of encouragement for the students on that day, which I think is really nice. 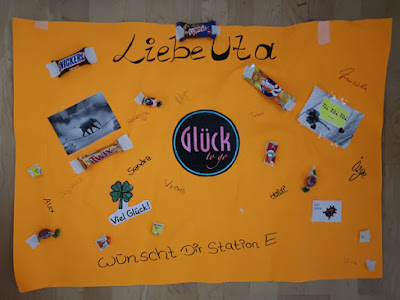 My favorite picture is the elephant walking the tight-rope. I am saving that one for future reference. I had been allotted the main patient I wanted, and she was a sweet, slightly demented lady of 89 who did her best to cooperate. During the days before she had repeatedly talked about how nice it was that the sun was shining, a topic we could not peruse on that day because of the rain. Everything went well enough, although I was pretty nervous - it is such an unpleasant situation to have two examiners looking on. I don't think I made any major mistakes that would have endangered the patient's safety, I hope I disinfected my hands frequently enough, and I think I gave the impression I knew what I was doing. So although I won't know for sure until September when we will be given the grades, I think I can assume I passed. Which is all I care for right now, I just do want this period to be over. Not an easy thing to go back to school at my age, together with youngsters who could have been my (grand)children.

Thursday afternoon I sat around for a while, letting it sink in, went for a swim at the pool. In the evening I signed up for SAQA's 'reboot' special interest group on facebook, to get me back in a creative swing of something. I had seen that they were starting early August, so I had decided to join in two days late. I have no real clue what I am doing, I just want to fondle fabrics and follow the flow. I am diving into my scrap-stash. This is how I started on Thursday. A first piece, part of which had been preassembled, but I did sew one seam on Thursday. The main act, however, was indeed the signing up and posting it. 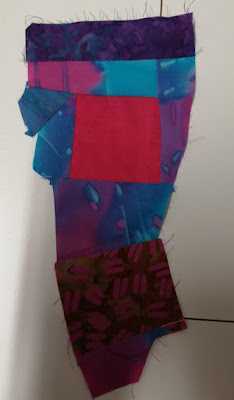 Since then I have been taking a bit of an inventory of what kind of scraps I have, quite a few are preassembled already in a kind of tone-in-tone arrangement. 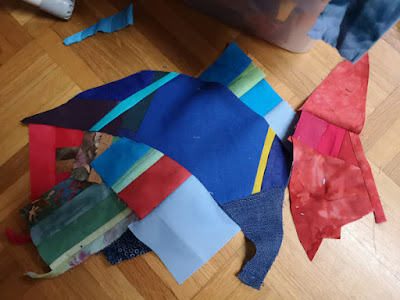 And as I had managed to put in the final weft-parts in the weaving piece I showed in the last post, I could take that off the wall, with a lot of pins involved. Now I have room to throw the scraps onto the design wall, and we will see where it will take me. 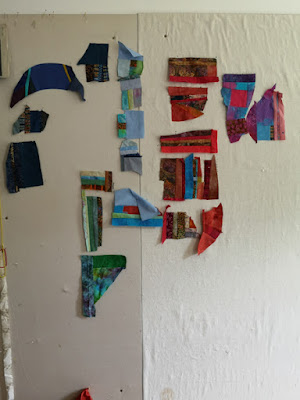 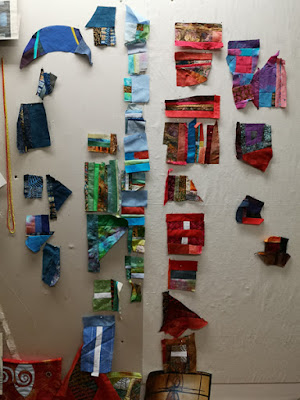 I do have more plans for the weaving piece, but that needs more thinking through.