SAQA Benefit Auction is on!

These days the quilt that I donated for the SAQA Benefit Auction is up for bidding. You can find all the quilts of section 2 in the auction here:
http://www.saqa.com/auction-view.php?scat=60&s=0 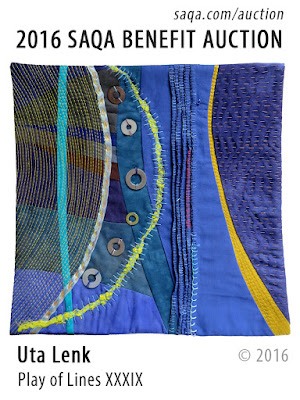 Last Thursday I went to the EPM in . Getting there was a bit difficult as train connections did not work due to delays, and overall it took me two hours longer getting there than I had orginally planned. And it’s not a short trip even with all connections working, let me tell you!

Because I had agreed to steward SAQA’s Wide Horizons every day I was there, and had meetings with various people to do interviews for the German Guild’s magazine I was so tied up in the short time I was there that I never got to go to any of the other villages beside Ste. Marie proper. At least I got to take a tour around the various exhibition spots in Ste. Marie itself.
I saw the selection of Color Improvisations 2 that was on display and was more impressed with them in reality than I had been with the pictures in the catalogue that I had seen some weeks ago.

I went to see the challenge quilts and have to say that I don’t understand why mine wasn’t chosen...


And I was very impressed with Malin Lager’s thread paintings. To be honest, I don’t need people portraits in thread for myself, but the technical perfection with which they were carried out is absolutely impressive. And I really loved the way she manages to create reflections on Venetian tiles and puddles.


At the SAQA meeting I made public my intention to retire from that position at the end of the month. We are still searching for a replacement as negotiations and inquiries have not yet led to a satisfying result in the kind of somebody saying “yes, that’s what I want to do right now!” Mostly I get a ‘ahh, not right now, I’m still working’ or something like that. I was pleased, though, that several people expressed their appreciation for the years and work I had done, that made me feel good. And it was sad to announce that I was going to retire – although I know it is the right time for me now, it will be rather different without the updates on membership, or the rep-coordinator’s mails regarding rep-issues. I will indeed miss it. 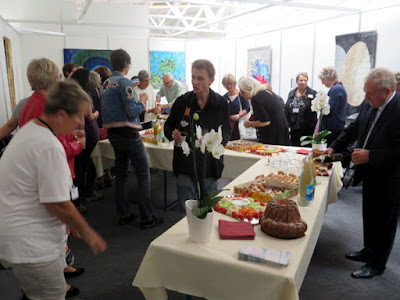 Being in Ste. Marie is always nice. I do admit that while I was fighting my way to get there, with connections missed after the train to Munich had been delayed and I did not make the rather direct train to Strasbourg, I was thinking ‘well, it will be good to take a break from going to Ste. Marie year after year, and next year at least I won’t have to be there in a function as SAQA rep’. But when I was there it felt completely different. It was good to see so many people I know, with like interests, and to know my way around, and to meet new people, too.
So when I left on Saturday afternoon I figured I might be back next year nevertheless – we’ll see.
Posted by Uta Lenk at Wednesday, September 21, 2016 No comments:

This morning – last day before school starts back – I managed to severely bump my left foot when exiting the shower. Of course it hit the biggest toe, which has been having a hard time anyway since I badly injured the toenail between Christmas and New Year’s when taking the inventory of my fabric for the business. Puss, aches for several weeks, then a few weeks of relative quiet and the doctor’s pronouncement that the nail would come off certainly, but it wasn’t certain whether it would grow back at all or, if it did, how screwed up it would look. It did come off indeed – relatively painless, for a change, and it has been growing back, in a rather lopsided way, but it looked like it might make up its mind to sort of go back to normal eventually. It was half way there. This morning’s incident, however, has definitely caused a severe setback because everything is blue now, the pain is back, and although I am pretty sure the toe isn’t broken it will certainly be a lot longer until my left foot is worthy looking at. My son had been giving disgusted comments already, and he being in a pubertarian state with little empathy or kindness towards mother these comments haven’t been of the kind that they can be repeated here. What a way to end the summer vacation. Nevertheless, I am going to on Thursday, and before that I have my first day of work teaching German to the refugee pre-class at the nursing school on Wednesday.

Yesterday I spent all day selling fabrics at the fair in Erding and was pleased enough with the results. Other vendors were rather dissatisfied with the results, and it’s true that there were noticeably fewer people at the fair. But they seem to have been the right people for my fabrics, and so I came home satisfied. 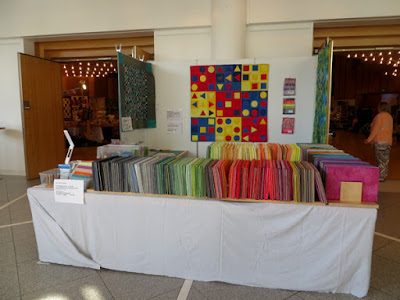 I have also started work preparing an article in the magazine Patchwork Professional, which I had been invited to by the editor when she talked to me at the stand in in June. It will be a demonstration of how to include special effect hand-dyed fabrics, such as my snow-dyes, in quilts to their best appearance. Unfortunately somehow I had missed to take note of the real deadline, and thought I had one month more than I should have had... which would have really made it stressful to get it finished on time. Luckily she graciously offered to re-schedule my report for the second issue of next year instead of the first, so I have a bit of leeway.

Tomorrow school starts back, and it is high time. The little boy needs a schedule to keep him occupied and channel his energies and pubertarian outbursts ...
Posted by Uta Lenk at Monday, September 12, 2016 1 comment:

Opening of "Stuff for Thought" in Nuremberg

Despite the fact that our town seems to be completely cut off from the rest of the world - and has been like that for months, with the cut-off place slowly wandering from one place to the other - I set out to go to Nuremberg yesterday because I wanted to be there for the opening of "Stuff for Thought".
The exhibition is a collaboration between the Nuremberg Bureau for Human Rights and textile artist Heidi Drahota and is connected to the annual Nuremberg Peace Award. Last year it was awarded to Amirul Haque Amin for his long-term work for the improvement of working conditions in textile production sites in Bangladesh, and the call for this show requested artwork along this topic. Heidi Drahota admits that she was nervous when the call had been issued because she was not sure that enough works would be submitted for such a topic. But it has  turned into a very interesting exhibition indeed. 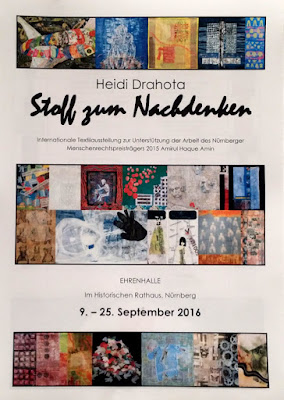 Last year Heidi Drahota had alreade organized a fabric community project, which is also being shown in the exhibition.

Several of the artists were present at the opening. 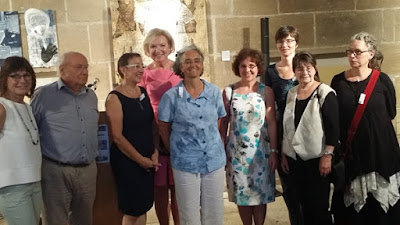 The entrance hall of the Nuremberg Rathaus is a stately venue which gets lots of visitors who are not necessarily coming for an art exhibition, but who will be confronted with these pieces on their way to municipal bureaucracy. 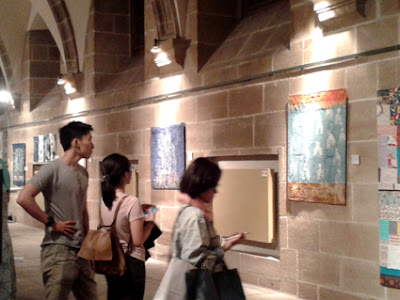 My quilt "Thinking of Nasrin" is positioned on a central pillar, and certainly light conditions will be better during daytime opening hours. I used several pieces of Afghan fabric and 3 Afghan embroidered squares and added a lot of hand-stitching myself. Because the embroidered squares were all made by a woman named Nasrin I decided on the quilt's title, as I kept thinking about this unknown-to-me woman while I was working on the quilt. 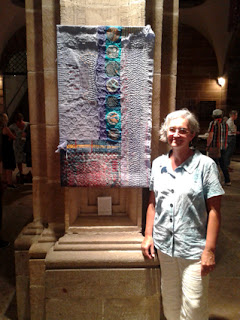 Barbara Lange worked on the topic of the rapidity of changes in fashion in her three-section-piece. 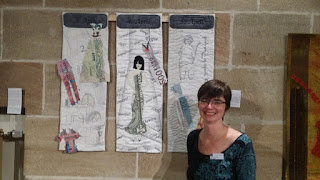 Jana Sterbova's work is made mostly from denim fabrics. 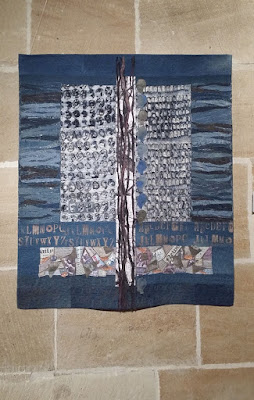 And Caroline Higgs' piece wonders about the people from Gambia who disappear 'Into the Blue' in search of a better life, and the connections that we, people who live in the affluent 'Western Countries', have to these people and their fate. 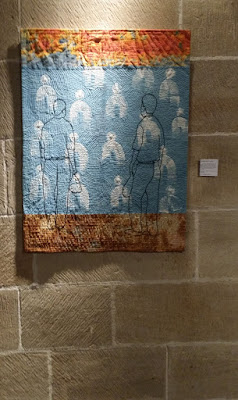 It is a very moving and thought-provoking exhibition and well worth seeing - until September 25.
Posted by Uta Lenk at Saturday, September 10, 2016 No comments:

"Stuff for Thought" in Nuremberg

On Friday the exhibition „Stuff for Thought“ will open in .
This is a joint effort by the Bureau for Human Rights Nuremberg and textile artist Heidi Drahota und dem Büro für Menschenrechte. (This is a German press release.  )
In the call for entries it had said that the city of , because of its history, feels a high responsibility towards the observation of human rights. Last September Mr Amirul Haque Amin from was awarded the Nuremberg International Prize for Human Rights. He is the President of the National Textile Union in his country and has been actively campaigning for improvements of working conditions in textile industry for many years. He will be attending the Nuremberg Peace Meal, and to celebrate this occasion the city of is calling for a Textile Exhibition in which works will be presented that deal with the topic of human rights.

I had entered several quilts in answer to this call, and it was „Thinking of Nasrin“ that was selected. This quilt was made for one of our challenges for International Threads and uses not only three hand-embroidered squares from the Guldusi initiatve, but I also included a piece of fabric that women in use to make their garments, hiding their faces and bodies.

The opening reception will take place on Friday, September 9th, 2016, at 7 p.m. at the Rathaus in (address: Wolffscher Bau, Rathausplatz 2). Should you be in the area, please come and join us for the reception. The exhibition will be on display until September 25th, 2016.
Posted by Uta Lenk at Monday, September 05, 2016 2 comments: 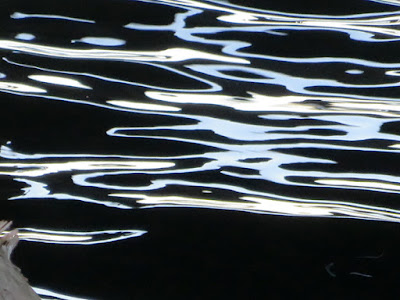 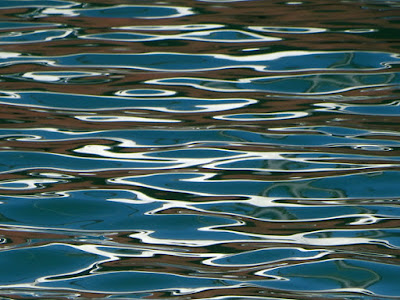 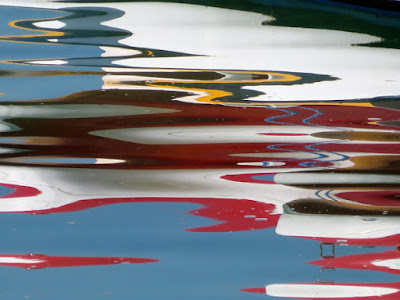 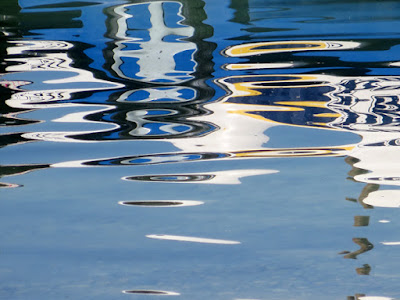 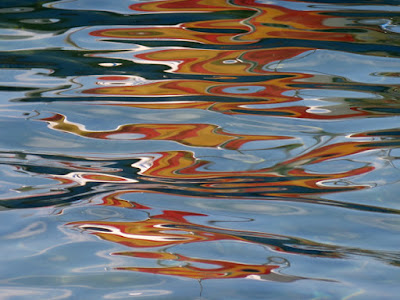 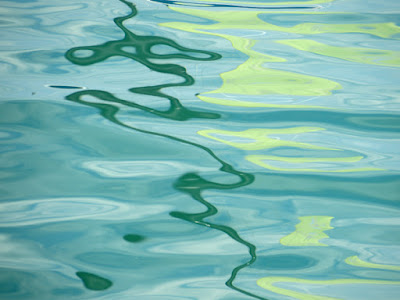 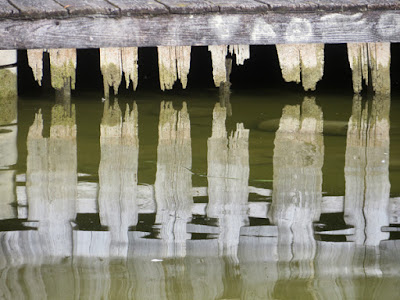