Colour of the month for November: blue.
Posted by Uta Lenk at Wednesday, October 31, 2012 No comments:

When I gave my report on what I have been doing with myself and my quilting since my return from Ste. Marie-aux-Mines, I left out two important activities.
For one thing, I was also preparing for a class I am teaching at my local church hall this fall, on the pattern “Irish Chain”. I sewed samples and prepared instruction sheets, so the participants will have something to take home. 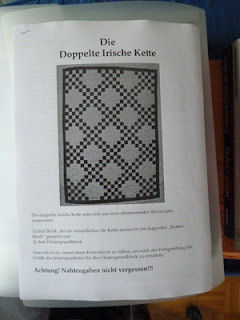 For the other part, I have been getting busy in my function as a SAQA co-rep for Europe/Middle East and was busy setting up a regional blog. This is a blog for and about the SAQA members in the region, and their activities with regard to art quilts. I will be the manager. I devised a header by combining the SAQA-logo with the blog title: 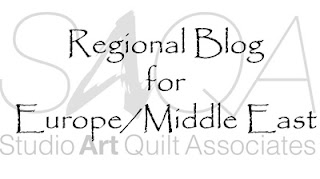 Only a few more adjustments, and then the blog will be ready for input by regional SAQA members. You can check out the blog here.
Setting up this blog has taught me yet a bit more about blogger, and I finally managed to set my own blogs onto Middle-European Standard Time... It had never really bothered me before, but now I won’t have to calculate anything anymore when I upload a post in advance. So just before we are changing back to Winter Time this blog has caught up with . (My son is an early riser – he wakes up by himself at six o’clock in the morning. It will probably be a while before he will have adapted.) And the dates and language for comments etc. is now English. Only took me almost two years, I am a really quick learner.
Posted by Uta Lenk at Thursday, October 25, 2012 2 comments:

So what have I been doing since I returned from ?
I went through the final preparations for and taught the workshop “Parquet and Patchwork” that I have posted about here.
I have been practising the piano a lot more than during the last year, which I hope my teacher will notice when I go to have my lesson next week... I made tons of quince jam and apple sauce as the garden season is coming to an end and last harvest activities need to take place.
I finally had an idea for a tight spot I had got myself into in May. When in Einbeck I saw that the German Patchwork Guild was having a little challenge for members to make a quilt 70 x70 cm, using pieces of two given fabrics that the president had brought with her from a trip to . The quilts are to be shown for the first time at the AGM of the British Quilters’ Guild in in April, and since I am also going to be there, teaching, I had figured I better get me one of those little packages. However, I had absolutely not counted on the kind of quilter’s block I would get upon looking at the fabrics. These are the two fabrics that were inside the package. 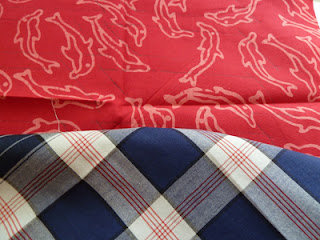 The package was called “checkered fish”, and somehow I got hooked on that combination – how do I do a checkered fish, do I really want to do that... But my idea came when I was thinking about the fact that I myself still had not done more in the parquet-style than sew the few samples for the workshop. Forget the checkered fish, just do a little parquet pattern using the fabrics.
This is the pattern I will use to make the quilt. 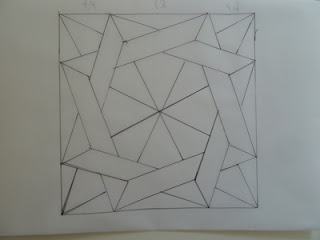 So I made plastic templates. Usually I cover up the numbers on the templates with scotch tape to prevent the mark rubbing off. 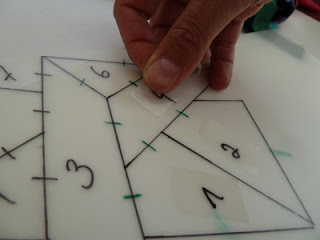 And this is the state of the project at this minute: pieces are cut, waiting to be sewn together, and then I will figure out how to do the border, although I do have an idea for that already. 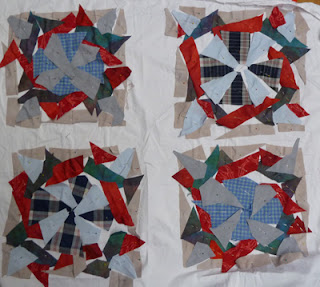 These are the leftovers of the two required fabrics – I think I did use enough of them to meet the challenge requirements indeed. 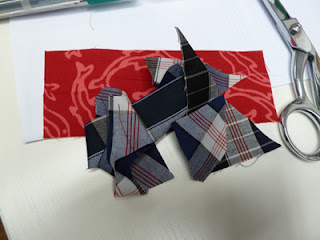 So have I been doing a bit of sewing, too, or is the new machine just sitting there idly?
In spring I had seen on Bonnie Bucknam’s blog that she has started a continuation of her “100 quilts for an orphanage in Guatemala” project which she calls “Quilts for MayanFamilies” .
I had promised her I would make at least one top, but I had announced that I would not get started on it until after the exhibition in .
Which I did during the parquet workshop – I started cutting the pieces for a quilt that would meet the size requirements, also a parquet pattern. In fact, it’s the first practice pattern that I used to get participants started, getting them acquainted with the half sewn seams.
This is how far I had got with the sewing before I had to start cutting some more pieces: 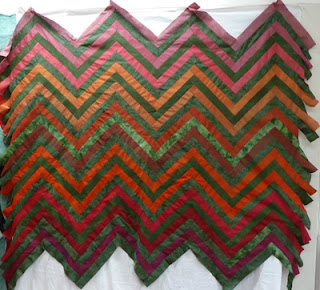 Which I have done, even sewn them together partly already, but I don’t have a picture of that stage yet.

And after these, I will return to Play of Lines and Shapes, I am sure.
Read more »
Posted by Uta Lenk at Saturday, October 20, 2012 No comments:

Beyond „Beyond Comfort“, „Color Improvisations“ and Carrefour Ste. Marie-aux-Mines

Currently I have five quilts travelling in internationally oriented exhibits.
Two of them are with SAQA’s “Beyond Comfort”, which will next be ssen at the Butler Institute of American Art, , from January 13 through March 10, 2013.
Two of them just had an appearance at the Alexandra Palace Knitting and Stitching Show to – “Color Improvisations” was in London, and is now scheduled to go to Dublin and then Neumünster in Northern Germany in December, before going on to other international venues. The fifth quilt is my jury member’s contribution to this year’s Contest at the Carrefour Ste. Marie-aux-Mines, which will be travelling with the exhibition for a whole year before it gets returned.
And of course, I had that big show in Ste. Marie-aux-Mines in September, so overall I guess I could already now say it has been a successful year.
However, I did not get into any of the other shows to which I submitted entries throughout the year. Neither EQA nor Quilt Triennale nor SAQA’s Wide Horizons III, nor Schweinfurth’s Quilts=Art=Quilts, and, most recently, Quilt National. Now with QN I didn’t get my hopes up high to begin with, having heard about the numbers of entries, which reduces probability to get selected even further than in any other big event. And I’m in good company when looking at all the people I have heard from who got declined as well. I think that might make a wonderful exhibit – “We did not get in”! (And, of course, it raises VERY high expectations as to the quality of the show as such, when all those well-known people were rejected.)  And after my experience as a jury member at the Carrefour, I have heard that I have been the cause of indignation in others, whom I (well, partly I) rejected...
Conclusions from this? Keep trying, don’t take it personally, and look for other chances and possibilities to exhibit.

From parquet to patchwork – new workshop’s first round!

Last weekend I had the first chance at my newly developed workshop that uses old parquet patterns for patchwork patterns and designs. 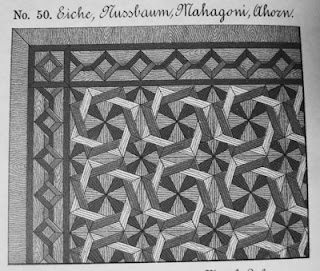 It took place at the perfect house to be in for a workshop, the Catholic Community College Petersberg, where I have been teaching patchwork classes for over eight years now – it has a large classroom, great rooms to stay in, great food three times a day without having to do anything but clear off the table after the meal, and very pleasant and efficient staff. Paradise!

I’d been preparing for this workshop for several years after the initial idea. But the last samples were sewn only last week, after my return from . And I have to admit that I have yet to complete a full quilt using one of the patterns – the participants are further along in that now than I am!

Everyone had to start with the same pattern to get a grip on the trick of it all: half-sewn seams, practised on a pattern called ‚long slabs’ (or something like that – please forgive my lack of appropriate woodwork terminology!) 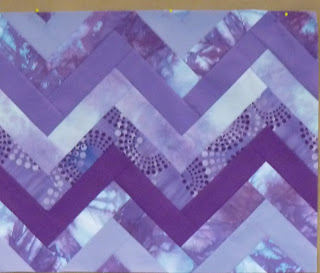 I was a bit surprised that the choice of patterns later on, when the participants got to choose their own project was almost unanonimous. I could have saved me a lot of work indeed had I known that! But most likely next time the choices are going to be different, and I really don’t consider the preparations a wasted effort.
Only one participant chose to stick with another version of the practise pattern, this one called ‚alternating slabs’.


Most of the others picked one pattern that I had not even prepared a sample for, but had included in the notes only as a sort of addendum. 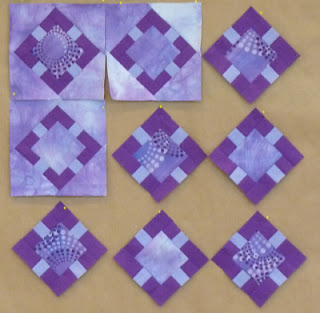 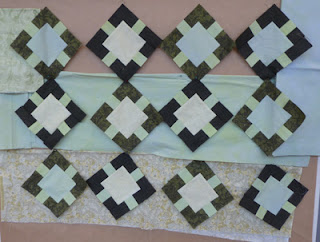 And two participants spent their time successfully searching solutions for the best construction of this gordic knot: 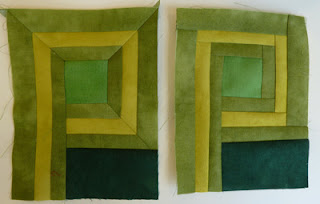 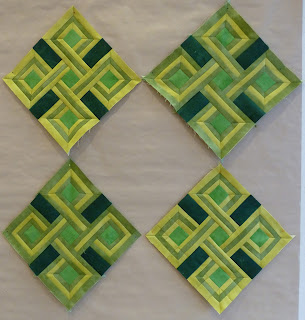 All of these patterns are easy to work with a rotary cutter – I had been told last time that the ‚hard core participants’ at this venue don’t really like to work with templates, and had prepared accordingly. (The pattern at the top of this blog, which I really like a lot, would have required templates and a lot more pinning!)

It was an inspiring and fun weekend, and I was very pleased with the results. This workshop certainly premiered successfully! I have gained a few insights into the structure and procedure of the class, and will make sure to include these before I teach it again. Two occasions have already been scheduled for March and November of next year, one in the north of , and one in the south (see here for more information). And another chance may happen in England in April, a week after the AGM in Nottingham. Check back for more details on this!
Posted by Uta Lenk at Friday, October 05, 2012 No comments: