What kind of film is this?

A lot of life is going on these days, and it leaves little time to ponder what would be worth writing about. Only little time for stitching as such, anyway. 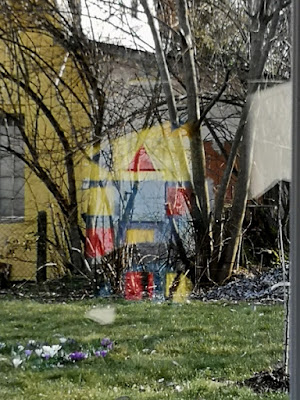 And then so many things happening that bother me. I received my second dose of vaccine on Friday, which in itself is a very good thing and I am immensely grateful for, despite all the vagaries about the vaccines as such, the mode of distribution in Germany / Europe / less developed countries, how the pharmaceutic corporations are using it to manifest and milk their power, and instances of corruption in politicians connected with face masks blablabla. 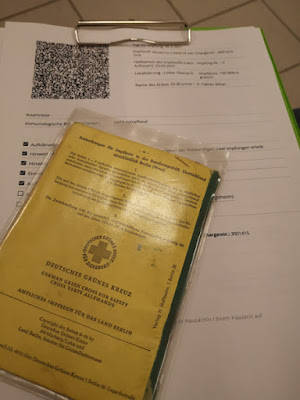 I had received the shot around 2 p.m., my arm started hurting later that afternoon, getting bad and worse, and then I went to sleep at 8 p.m. And slept. and slept. and slept. Except for two minor trips to the lavatory, a drink of water and a few words with my husband I was not able to do anything on Saturday, I slept and slept and slept. Until way into Sunday morning. By Sunday noon I was pretty much my old self again, if a bit slowed down still. But I did feel somewhat like a Rippa van Winkle, especially when looking through the paper, which, at that point was only yesterday’s paper, but sported news that seemed to tell me that the world was really crumbling in its mindset, as if my sleep interval had made my perception to it all even more acute.

Or has the virus dug deeper into all our brains and is by now really getting to our core? Life seems to be getting stranger and stranger, and some things I see hurt me more and more. One example: the current head of the grouping calling itself the Christian Democratic Values Union, a rather right-oriented section within the Christian Democratic Party (definitely not a party on the liberal spectrum of the political scene – they are conservative! they promote conservative values!) announced he would not be available for another term when a new head would be elected within a couple of months, because of the “dangerously left-oriented turn that Christian Democratic Policies have taken”. Excuse me? I have a very hard time understanding where left-orientation can be found or even suspected in Merkel’s or anybody from the CDU’s ranks politics. It felt like being in the wrong film. That’s when I first thought about how Rip van Winkle must have felt. And I had only been gone for a day. Made me wonder, too, how people who are recovering from a coma, or whatever kind of longish sedation, feel like, when they are returning back to real life. And then I began thinking about Sleeping Beauty and the depiction of her waking up after her hundred years of sleep. Being ‘kissed awake’, and simply as that she is whisked off by the prince, I mean, did he ask her whether that was what she wanted? But to be honest – I did not follow this thought through. I had applied for a job at the University of the Arts in Berlin earlier this year, as the HR person for Equal Opportunities, and while simply the process off applying, imagining myself back in an academic environment, how it would be and what it would mean to me living in a city like Berlin did me very good, the fact that I wasn’t even invited for an interview really pissed me off. However, I don’t approve of the way political movements are now trying to interfere with spelling ‘regulations’ that are supposed to show a more inclusive attitude towards underprivileged sections of society. I don’t think it will work through political pressure, these regulations will only split society even further – so in the end I am a bit relieved that I did not get that job and would have had to be at the forefront of this issue. Where my stand probably wouldn’t have been received well.

I am rambling on, mostly because I don’t have a lot to show. I did start a sunflower field and a tomato farm, though! 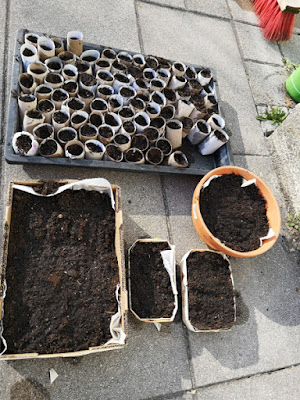 But there is something interesting going on. For almost two weeks now I have been posting design options for the Burgoyne Surrounded block on the Patchwork Gilde Deutschland’s website, members area. Which is turning into an adventure in designing for me. I am slowly learning tricks and options of EQ8 that way and have come up with some really fun layouts.

Here are a few recent highlights from the last two posts. 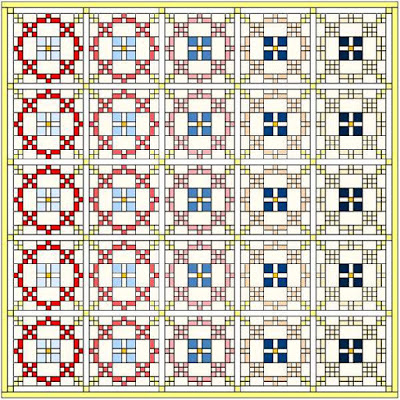 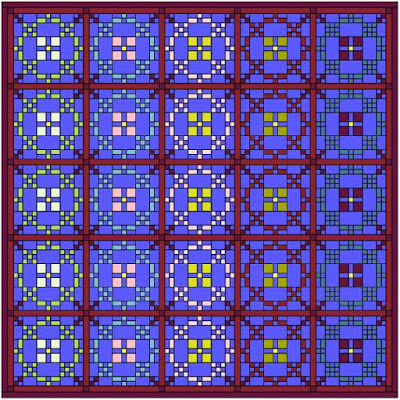 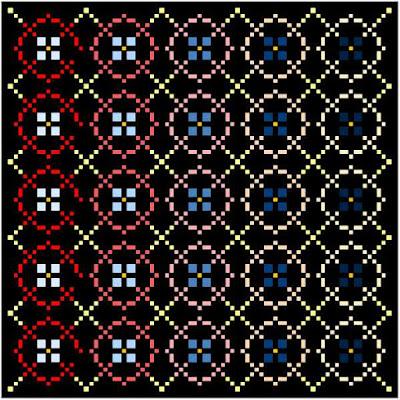 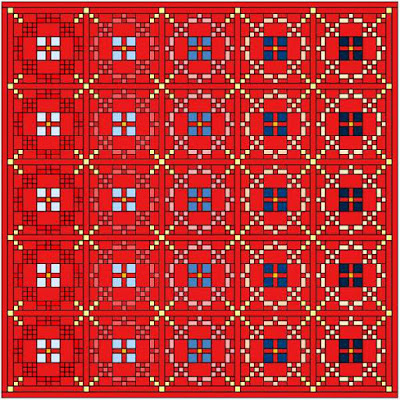 As I am not exactly sure whether this activity is actually finding any response within the Guild’s community (nobody except the web editor has left a comment in the comment area yet). It has received some nice comments on Instagram when I post on my personal account, whereas the members forum is open only to members, so I have decided to take at least some of the most exciting designs (in my opinion) that I come up with to a wider public. Be prepared to see a few more of these here during the month of April. One thing I will try to do is to improve the quality of the pictures, perhaps saving them in a different size will also make them a bit more catchy.

For months on end everything has been closed, no workshops or gatherings or even visits with more than one other person possible. Then it seemed as if numbers were going down, a new regulation for adult education centers was announced (my son was alternately going back to school, too) – and the workshop at my usual retreat place Petersberg, north-east of Munich, scheduled for this past weekend, was happening. Only a third of the people who had originally signed up actually committed to coming under the strict hygienic regulations posed by the administration, but the director nevertheless decided that it would be ‘on’.

At first I had been sceptical whether I wanted this to happen, or did I want to go – it meant a severe cut in revenue, after all, and as I had been expecting it to be canceled I had thought about other things to do for the weekend (i.e. finally get serious about studying for my upcoming exams). But after a number of unpleasant experiences last week I was happy enough to get out when time came around, packed my car, and took off. 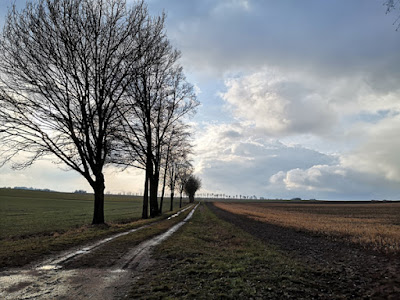 A bit of dramatic sky on the way there – we have been having rather cold temperatures with April-kind-of-weather. And then we were the only group, eight people, in a house where normally there can be up to eighty people. It felt a bit eerie indeed. Eight small peas in a large pod...

But we were determined to make the best of it. I had posited that we talk about anything expect the Big C thing, and although in a few instances little references happened, everybody in the group was eager to check everybody else. We had a lovely weekend sewing, chatting, trying out stuff. It wasn’t a workshop, because we felt that the others who didn’t come but still somehow belong to the group (it’s a rather consistent pool of participants who regularly come to the gatherings) shouldn’t be left out completely. They actually 'joined' us twice for brief zoom interactions.

I enlisted everybody present to make one example of the block ‘burgoyne surrounded’, which is the topic of the current sew along I am hosting for the German Guild, and we came up with a nice selection of examples.

Some of them I may use for further explorations of the pattern in the next few weeks. For posting on social media we even dared take a photo for which we dropped our masks briefly after having set it all up in an almost socially distanced array. 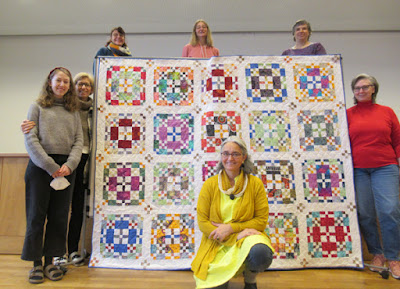 Numbers of infection are on the rise again, and the house may have to close down again perhaps day after tomorrow. So this was a strange little heavenly retreat. But it gave a feeling of almost normal, at least until the moment when we had to leave again Sunday afternoon.

A kind of sew-along: #gildemodernburgoyne

A lot of life has been going on here lately, too much to write about, only a reason why I once again did not post a lot. Although I have been creating, and I may report on that later.

In any case, today is the day of the 'reveal' of the finished (modern inspired) version of the Burgoyne Surrounded I have posted about before, and for which Kathy requested a picture. Here it is: (quilt holder is my by now really tall 15-yr-old, thank you!) 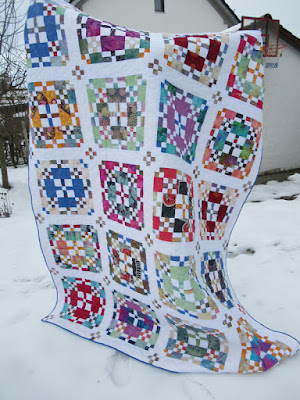 The Patchwork Gilde Deutschland e.V. is hosting a forum-based sew-along for members, and we will be presenting a little bit on facebook and instagram as well. The buttons/teasers for social media were designed by our experts on the web-editor-team, and I thank them for their patience and support. 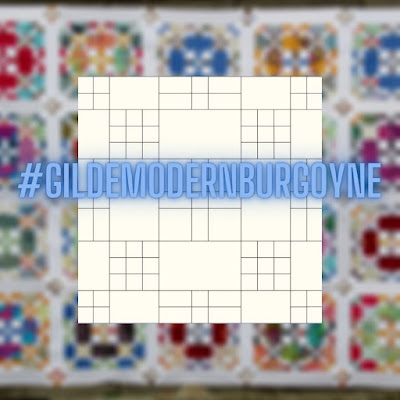 I will be posting design ideas that I will create with my new and extensive (hmmm...) knowledge of eq8 and that will be a steep learning curve for me. And I hope people will have fun following along, joining in.