Inbetween finishing the last piece for the exhibition in and actually leaving for  there were a few days that seemed a bit less packed. I had already started on the next pieces in the Shapes series while I was waiting for the threads with which I had wanted to finish Shapes 10, and certainly could have continued working on that. But I also felt an urge to start preparing for a class that will begin in the end of the month. So I figured it would make sense to clear out and put away the contents of the box that had been traveling back and forth with me to the Log Cabin class I taught at the community college in last fall. That way the box would be ready to hold materials for the next class.
When teaching Log Cabin, I always sew a few blocks myself – partly for the demonstration, partly when the students are busy and I wouldn’t have anything else to do but walk around making them nervous by constantly looking over their shoulder.
Last fall’s results were part of what came out of that box. I sort of had forgotten about these blocks... When I counted them, I thought they were too many to just let them sit around somewhere waiting for another Log Cabin class. So I  made six more blocks, 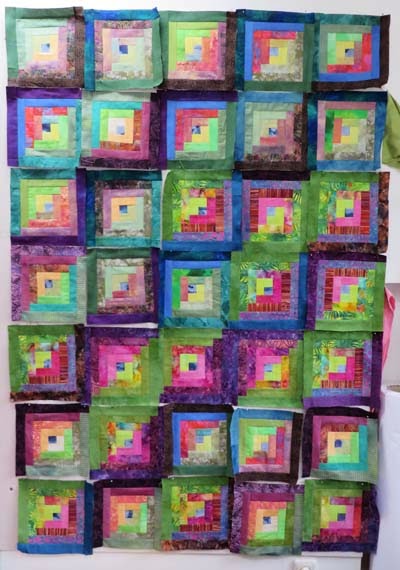 sewed them together, found a backing,

and sent it all off to Bonnie Bucknam for her Quilts for Mayan Families project (for which I had donated a piece already last year).
Felt good to be able to do something like that so quickly – not counting the hours which I had spent in the fall...

Bonnie in reply sent me some pictures of the quilt I sent last year, now quilted and finished: 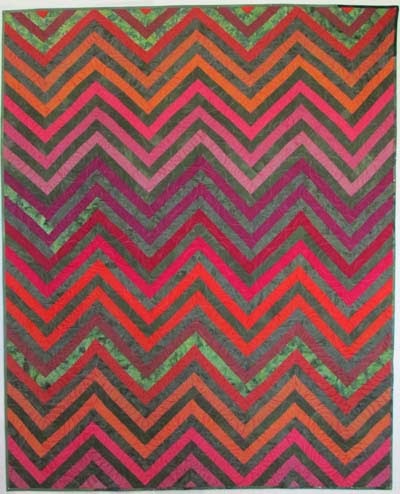 While I was finishing the Log Cabin blocks, my son was working on another UFO, from the results of demonstrating the technique of fast half-square triangles. He has claimed that it was his turn to be the recipient of a  quilt, and (to keep him occupied) I had enlisted his help: arrange them the way you want them, so we can figure out how many more we need. A few weeks ago he had started with the first attempt, 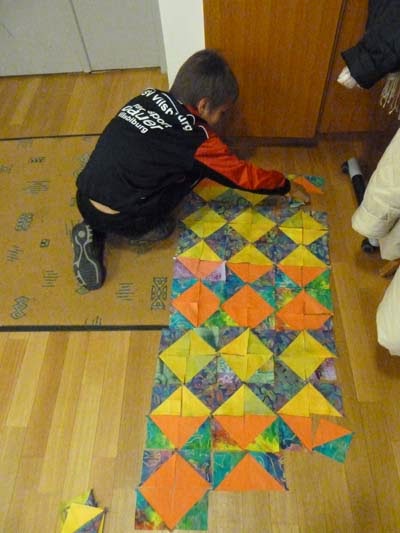 but now he has changed his mind and wants a “barn raising” arrangement.

It will be a little while before it is completely finished. But it's on its way.
Posted by Uta Lenk at Wednesday, January 29, 2014 No comments:

I have just returned from a few days in Freiburg, where I had the opening of a small exhibition of my works in the gallery space of "quiltart".

Here is Sophie helping me with the hanging - she is almost ten inches taller than I am, and of course used to the hooks in her gallery:


If you are an attentive reader of this blog you may have noticed that the blue one during its evolution originally was referred to as Shapes 8. However, I saved finishing the binding for when I was finished with the yellow one, too - meant to be Shapes 9. Which led to confusion when stitching the names onto the backs - and when I wanted to put Shapes 9 onto the yellow one, I realized I had already put Shapes 9 onto the blue one. Because I had already closed the seam I really didn't feel like ripping it out again and simply changed the numbers. Not that it makes much of a difference. They could be hung in a different order, too.

Here are a few other views into the gallery: 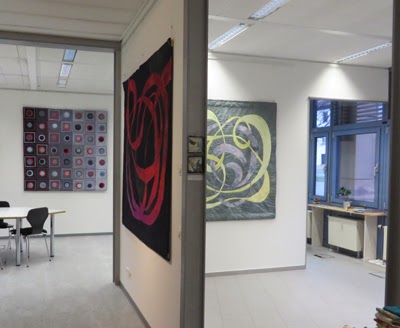 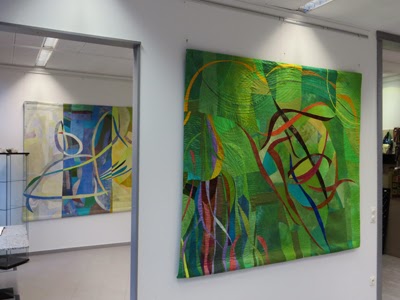 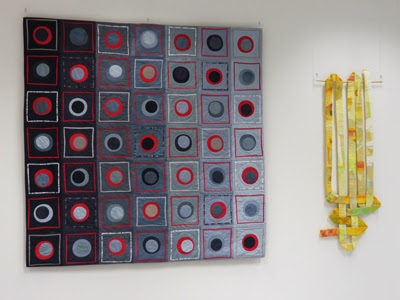 Attentive guests at the opening: 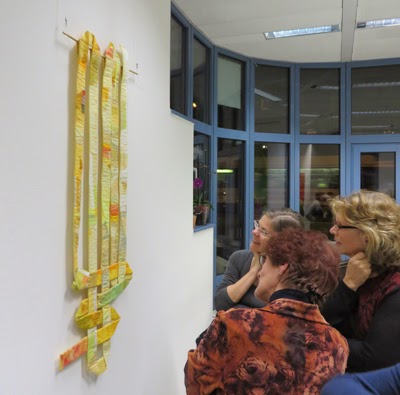 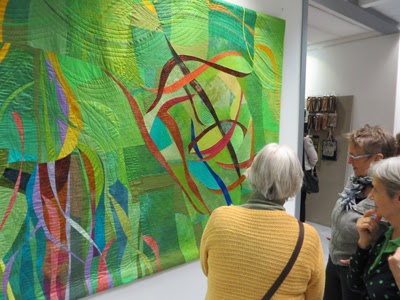 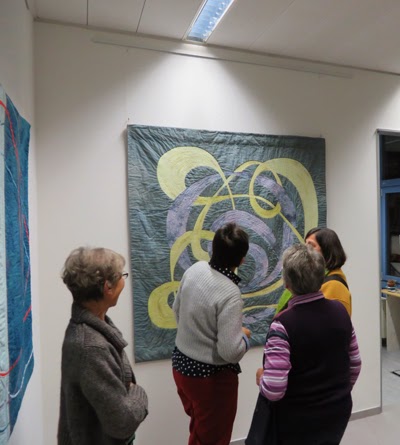 And a shot of me: 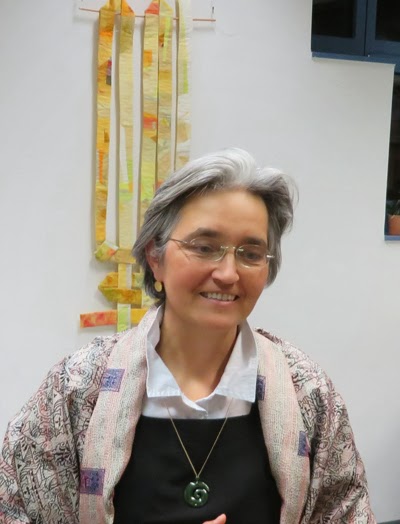 With an official statement about my change of hairstyle, because so many people asked me about it: I really prefer to have my hair completely short. But as my hair colour is changing, the quality of hair changes, too, and I looked like a hedgehog fresh from a severy fight every morning I got up. So my hairdresser suggested to let it grow longer a bit, and she was right, as the increasing length pulls it down a bit. But this as about as long as I am going to let it grow. Looks better than I thought it would, too, I think.
Posted by Uta Lenk at Sunday, January 26, 2014 5 comments:

A few weeks ago I found the announcement of two large exhibitions of fiber art in art museums in the paper: „To open eyes – Fiber Art from Bauhaus until today“ in , und „Art and Textile“ in . 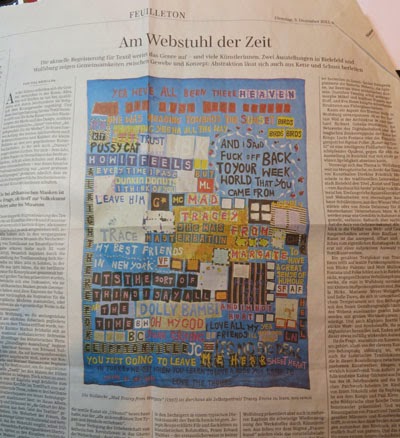 My husband immediately wanted to send me off to take a look at both of them one after the other, but as we live on the other end of the country, we could not really fit it in, although Germany is relatively small compared to some other countries. However, I was visiting with friends not too far away from right after New Year’s, and that gave me a chance to at least see this exhibition, which is still on until Feb 16. 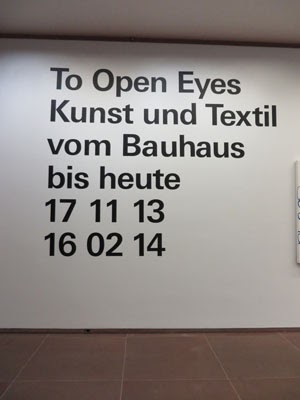 used to be a city with several linen factories and the exhibition included information on that, as well as on Anni Albers, Gunta Stölzl and Benita Koch-Otte and other weavers from the Bauhaus, fabric patterns from Wiener Werkstätten, Sonia Delaunay, former professor of art Sofie Dawo (some pictures here), fiber artist Marianne Meyer-Weißgerber (whom I had never heard of before, but really liked her miniature pieces),

Sheila Hicks (some pictures here and a pinterest page here), and several other modern artist who have worked in fiber - some only occasionally, some more frequently. Aligiero e Boetti let Afghan women do the work of stitching for his series Mappa, embroidered maps of the world as boundaries changed (link to one that is in MOMA).
No photographs were allowed, not even without a flash. And although the catalogue is interesting and informative, it is would be much easier and probably more personal if I could show you a few photos I took and talk about them. But it is a very interesting exhibition and worth seeing, and it is wonderful to see so many pieces of art made from fiber in one exhibition together.
Although there were several pieces classified as ‚patchwork’ which would not have made it into any juried quilt show. Basically, they were pieces of fabric wonder-undered onto a white background, not stitched, no quilting – but with the topic ‘death’. Now what does that tell us about quilts in the art world? You have to have an art degree, and then make ugly fiber pieces, then you will get into museums. Or do you have to wait for 70 years, such as Gunta Stölzl, before they will start recognizing you? Well, Sheila Hicks didn’t have to wait for so long.
Nevertheless: well worth seeing!

High Noon - getting into the rhythm!

3 - no picture taken (forgot to set the alarm on my cell phone, and we were out in the woods where no church bells had a chance of reminding me)

12 - no picture taken. I was visiting with an Afghan refugee family for the first time who lives five people to a very small room, they were serving me tea and we were trying to communicate without a common language. I just didn't dare whip out the camera in that situation.


What a fun project! All I have to do is make sure I won't be taking mirrored views from my studio window for the rest of the year... and set the alarm.
Posted by Uta Lenk at Wednesday, January 15, 2014 2 comments:

Colour of the Day: the final selection

When looking at my list of blog posts I just realized that this one, which should have appeared on December 31 somehow never got moved from 'scheduled' to 'publish'. So, a little belated, the conclusion of Colour of the Day. (Forgive that you have already seen the announcement of High Noon mentioned secretively at the end.)

The first weeks in December just dragged on as had been the case in November - dull, grey, and absolutely not a whole lot of colour around. So basically I continued as during the month before - taking pictures of colour whenever there was a chance, not really abiding by my schedule. Here is the final selection of pictures in this project.

This is the end of two years of Daily Art with a focus on colour. It is amazing where you can discover colour when you start looking out for it. Never had I imagined how this project would change my way of seeing!
I certainly will continue to be looking out for colours when taking photos. But next year's Daily Art project is going to have a slightly different focus. To be announced in a couple of days!
Posted by Uta Lenk at Thursday, January 09, 2014 No comments: