I have just returned from several days in Karlsruhe, where I had a vendor's booth at the Nadelwelt, a big and international event for patchwork and crafts.
I came back with a good result and lots of learning experiences.
For one thing, I learned that when you book a 3-m-front for your stall, 3 m is not necessarily what you get. I was located between two other stalls - both open to their other sides - and the separating walls between us, which we each used from our respective sides, were both situated on my floor space. Now my custom-made wooden holders for my fabrics measure 1 m each, they are meant to hook up for stability, and I was counting on putting three of them next to each other to fill up the space. But when you have 3 m of wooden holders, and only 2,94 m of front, that doesn't even make a tight fit - it doesn't fit at all. So I ended up juggling myself through the days like this: 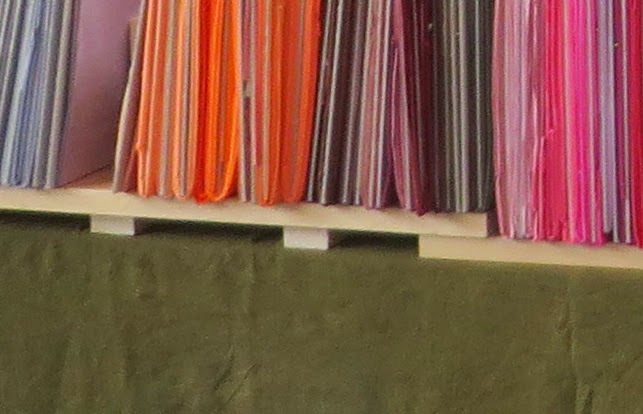 Not exactly a pleasure to look at, but as I was standing inside the booth, I didn't see it, and so I stopped thinking about it, after I had been really annoyed on the day when I put everything up.
I had absolutely no time to look around at the exhibitions, so I can't give a report on what could be seen. Being alone in my booth I was glad that every once in a while some known face appeared, and sometimes when necessary I could ask them to keep an eye on my things and take a little run to the ladies'. Very nice of the organizers - they had put up a sign on one of the toilet doors 'reserved for vendors', so we were officially allowed to break the always long line and I could return quickly.
Whenever there was a lull in visitors - which did not happen often - I thought about how I would do things differently next time, for example I have decided that I will alter the layout of my booth, to avoid that annoyance of the missing 6 cm.
I had taken a number of packages of the newest collection of the fabric club, a variety of shades of purple. 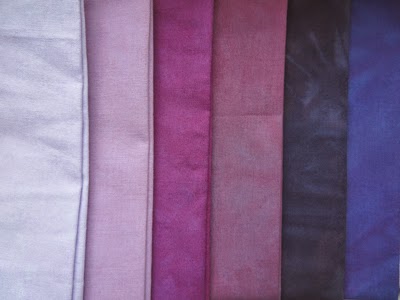 They are now sold out - which is a first. I have not yet been sold out of the collection packages before the collection itself had been sent out to the subscribers! This only happened yesterday, after I returned home.
A number of people signed up as new subscribers for the fabric club, which is an additional plus to my overall result. So I am quite content with this adventure right now.
Yesterday was spent unpacking, getting things back in  order. Today so far has been dedicated to office business, and later tonight, when I return from being a soccer mom, I hope to get back to the sewing machine.
Posted by Uta Lenk at Tuesday, May 27, 2014 No comments:

As I was stitching away on my entry for the challenge in Ste. Marie-aux-Mines (for which the deadline is June 26, download the conditions here), I was also busy dyeing this month's fabric club. 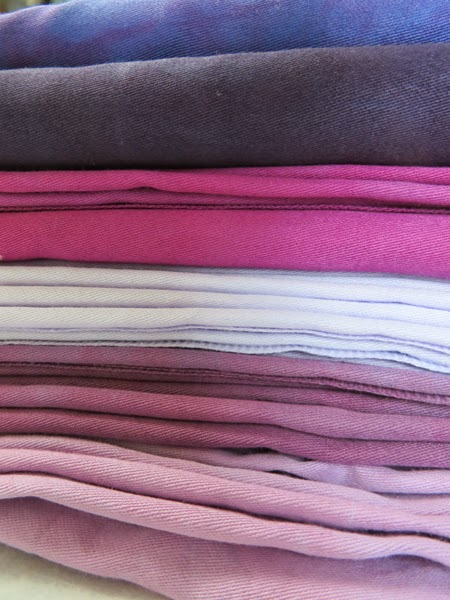 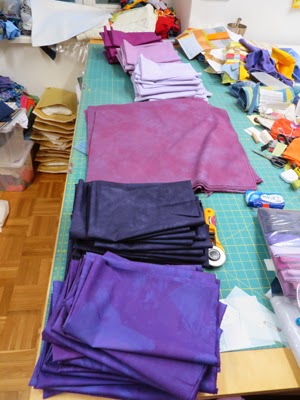 I love my fabric club, the element of surprise that still comes with it - although I do make plans for mixing ratios of dye powders, and what I want to achieve, there is always a certain degree of spontaneous decisions and alterations, and I can fully say that I never know in advance what the final outcome will look like. Cutting and packing it all is my least favorite part of it all, but when I find pieces of fabric that look like this 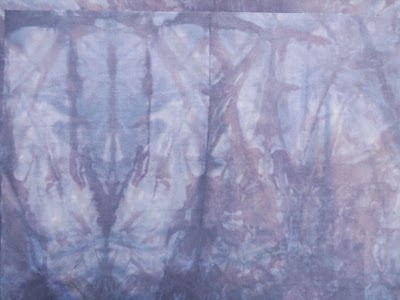 I relish in the results. And hope that the recipients do so, too. And I have no problems with letting these fabrics go out into the world, in fact I enjoy knowing that other people will receive their packages and hopefully experience a little bit of an "ooooh!"-factor when they open it and see what they are getting. The May Collection will be sent out to their destinations next Monday - after I return from Karlsruhe. From Friday to Sunday I will be there with a booth, selling hand-dyed fabrics at the Nadelwelt.
Day after tomorrow I will pack up the car. It's the first time that I will be present at such a big event, and I realize I am getting more excited and nervous about this than I thought I would. What will it be - ? Should you be there, do stop by - my stand is C 3.5. Looking forward to seeing you there!
Posted by Uta Lenk at Monday, May 19, 2014 No comments:

I've spent as much time as possible this past week stitching my entry for the Carrefour challenge "Imagine". It's taking forever. And it is an odd mixture of stupid repetition - stitching, stitching, stitching, and yet more stitching (hey, had I not said that I would never do thread painting, because it's not for me? so why am I doing this?) - yet requiring my full attention, otherwise I will have to take out stitches in the end because I ran over the boundary lines of the letters.

But I am nearing completion of the stitching of the top.


And that's well enough - I have to return the machine embroidery frame, which I borrowed from Barbara, before the end of the week. Learned a lot about lettering in this process...
Posted by Uta Lenk at Monday, May 12, 2014 1 comment:

Very tedious, making one feel rather stupid - and yet it does require a lot of concentration, or otherwise I'll run over the edge.
So my brain is dead, my eyes are tired (oh yes, now there is no longer one birthday left between me and the 50!) - but I think it will be really good. So now I will go up to my room and put in another hour or so before going to bed tonight.
Posted by Uta Lenk at Wednesday, May 07, 2014 No comments:

A severe case of procrastination...

was ended today. On Monday I had finished the quilt I want to enter in the Wide Horizons IV, and already that one had been put off repeatedly. It could have been finished earlier... I then quickly put a finish around a small cut-off which serves perfectly as a contribution for an exhibition in celebration of 20 years of 'quiltstar' in Freiburg, under the title "19 + 1" (of the twenty years of the shop, 19 were under the ownership of Monika Schiwy-Jessen, and during the last year it has been under the ownership of Sophie Maechler). I won't show it in total here yet, as the show is on in the fall, but it has 19 mother of pearl buttons on it:

After I finished zigzagging around this little feller, the lower tension was completely gone, and no extended cleaning attempts from my side could get it back. A trip to the dealer - which meant two days withouth the machine when I had really wanted to get started on stitching my entry for the Carrefour. I felt completely amputated, did a little bit of dyeing and started yet another attempt at cleaning up that work table in my studio, forever cluttered.
Finally, knowing that I won't get much work done over the weekend because of family festivities, this morning I sat down and started stitching: 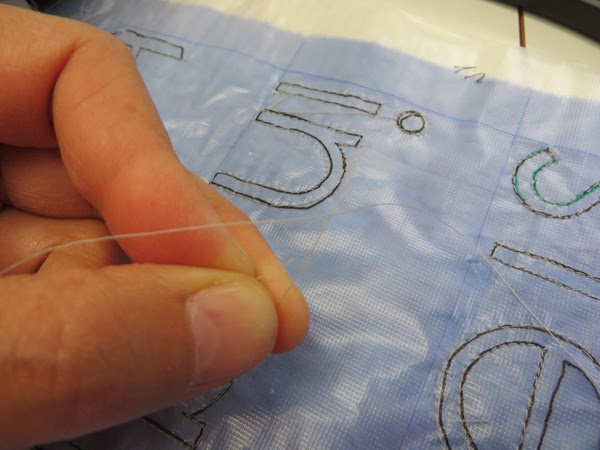 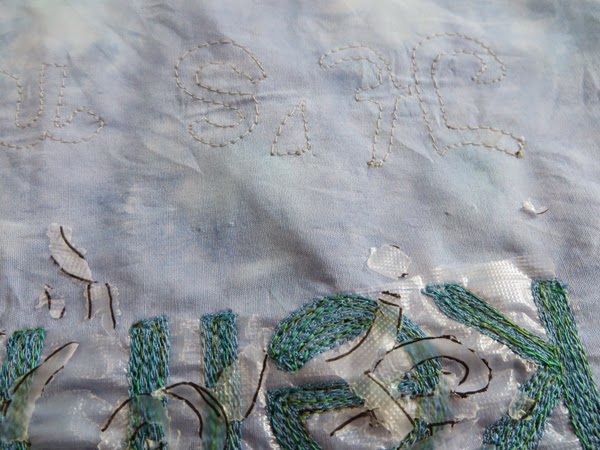 Of course once I'm at it I don't understand why I kept putting it off. The first three lines are finished - out of approx. 16 or 17. Still a little bit to go, but at least I'm on my way.
At the same time I would have liked to be in at least three different places - the German Guild's Annual Meeting in Einbeck, including the opening of Tradition bis Moderne, in which I have a quilt for the first time, at the OEQC in Veldhoven, Netherlands, and in Washington D.C. for the SAQA Conference, neither of which I have ever been to. Just as well that we are celebrating various family birthdays and I didn't have to make up my mind which of the three I would have preferred over the other two!
Posted by Uta Lenk at Friday, May 02, 2014 No comments: