Back in Africa - well, almost.

What kept me sane during those terrible two weeks at school was stitching in the evenings. I did a lot of knitting, and some sewing on projects which I have found out I must not post about anymore before the deadline that I am making them for. And I have been slowly catching up on my temperature quilt which I started in April and immediately fell behind with because so many other things were and are going on. (Until very recently I hadn't even taken any pictures.)
For one thing, in a typical Uta-manner I made it a bit too over-intellectual when I decided to do not only highest and lowest temperature of the day, but, due to the pattern I had set my mind on, the averages of highs and lows of the four days represented in the entire block AND the long-range-averages as well.
It looks good – well, I think it does – and by now I have sort of come into a rhythm and know what I am doing. But it is slow going, I keep getting confused about the averages – and I had not realized before beginning that there would be so much going on in the range of 10 to 14 degrees Celsius. I had to add new fabrics because the ones I had picked were running out, which of course adds to the variety. Finally, today, I have caught up to my first days in South Africa. 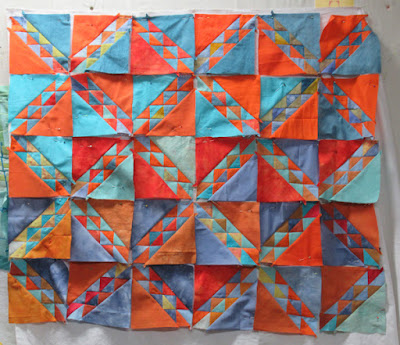 (Yes, I know, that is still quite a bit behind, but by far not as much as a week ago!)
Which makes for the title of this post… and I finally read Lyric Kinard’s blog posts about our days in Johannesburg, where she has posted many nice pictures and written about our lovely evenings in the ‘international hut’ on campus.
The group of international quilters who were staying in the same house during the festival became to be friends and we are thinking about preparing an exhibition together, certainly with some quilts that are using some of the fabrics we bought when we were being taken on our textile tour of Johannesburg. For that I have been thinking what I want to do, using a piece of mud cloth I picked up from the remnant bag when we all went wild at Amatuli’s .
I thought I knew where I was heading as I was going to add some red and then stitch some text onto it. 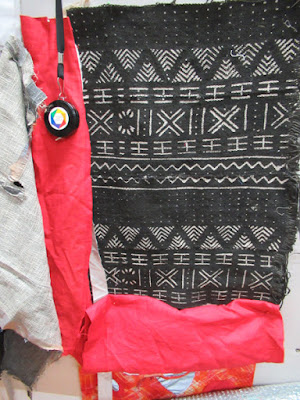 Then I found this piece of leftover linen from a former jacket of my husband’s (in the picture on the left) and was wondering whether this would be more in line with the quality of weave of the mudcloth than the red linen, which is much finer…and only until I did a bit of digging in the garden today, working on the compost heap, and there surfaced a piece of cloth that seems to have been hidden in that heap for a while. 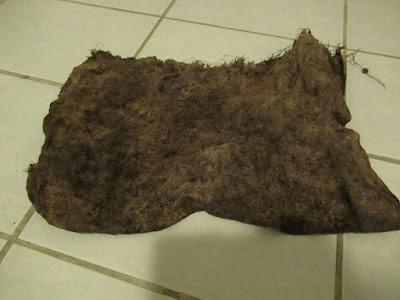 I did not put it there on purpose. Honestly! But it might well find its way into something. Perhaps even into the mudcloth piece, it being a special kind of mudcloth itself. I will rinse it and see what it looks like and then decide on how to proceed. Right now I can't even tell how big it is...
Posted by Uta Lenk at Saturday, September 28, 2019 No comments:

After the end of my vacation I had two extremely difficult weeks in school.
I started the training last year I was expecting strange experiences, being almost of grandmother age to some of my class mates, older than all the teachers, and higher educated already than any of them. But I figured I would stick it through with a view to the end goal, a diploma that would give me a secure job for the rest of my working life. Perhaps I am not mature enough, but these first two weeks of school after vacation tested every single strand of strength I have in me. I had not expected this training, and especially the school part, so emotionally difficult for me as it has been. I had a very very hard time enduring the still pubertarian sets of mind of some of the class mates, I have suffered in class session with poorly prepared teaching and a dulling method of dripping terms to be taken down in a text with prepared blanks which makes ‘learning’ almost impossible because nothing is self-acquired, everything is geared toward ‘learn by heart’ rather than ‘understand’. But most challenging has been the fact that I feel as if I am being treated like a child by these teachers, having to conform to a school regime which I find highly questionable. Not a good situation to be in. I was very close to dropping out twice, but am biting my tongue and hoping that some miracle will happen, patience and ease of mind will rain down from the heavens and I will find a way to push through.

In the middle of this particularly challenging stretch I had the fun of traveling with Barbara Lange to the opening of “No Rules, Just Jeans”. 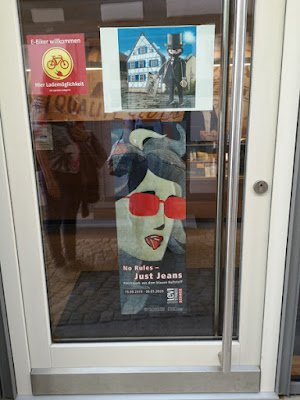 Barbara is the current Chair of the German Patchwork Guild, a wonderful quilt artist with a streak of creativity to her that has always kept me at awe. And she is always good for cheering someone up because there are so many things to laugh about when she is around, even when they might be serious indeed, that it was the best medicine to go about with her.
This exhibition, a challenge for German Guild members who had to sign up and received a small package the items in which had to be included in the quilts, is now showing at that Levis Museum in Buttenheim, which is located in Levis Strauss’ birthplace. 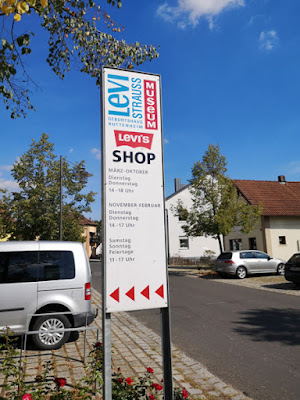 We traveled by train, chattin along the way and stitching, too. When walking from the station to the museum, and thinking how much we assumed the look of the place had improved since the 1840s we still understood why Mr Strauss had emigrated…
The museum is (partly) funded by the company that sells the jeans, 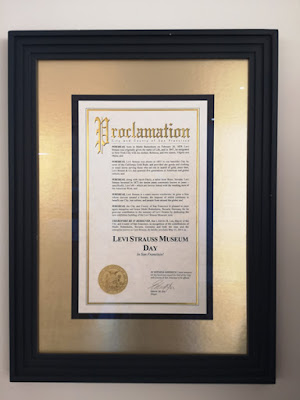 and it includes a photo of the house how it looked before the museum was established. 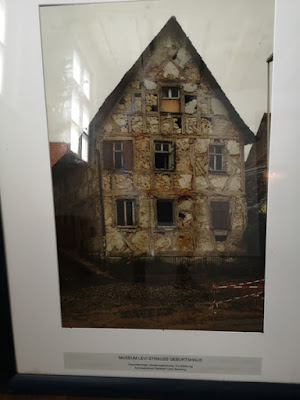 And it gives quite a bit of information on the evolution of that piece of clothing now so everpresent all over the world. For example, we learned that the idea for those little metal studs which have made apparel history was not Mr Strauss’ idea. But he was smart enough to grasp the opportunity when Mr Davis approached him to finance the patent and use that as the foundation for his company. 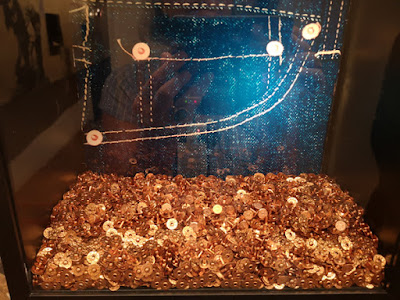 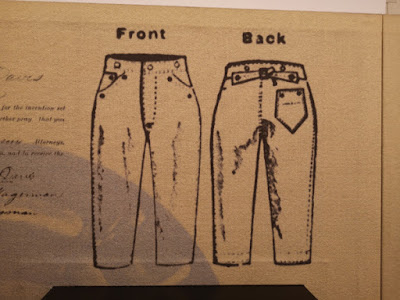 The German Guild’s quilts made from Denim and some patches to sew on is an exhibition well worth a visit, and the presentation in the museum is fantastic. 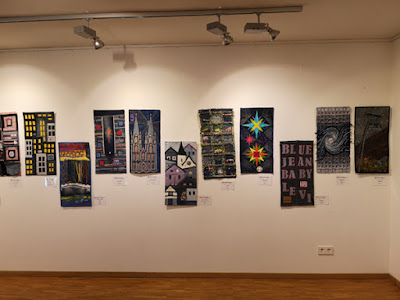 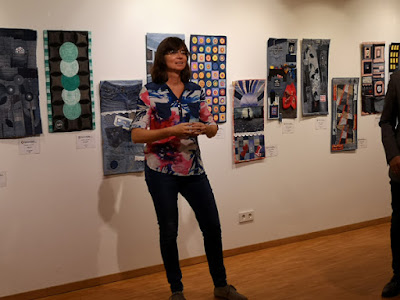 So should you be in the area before the end of January, go and have a look. Bamberg and Bayreuth and Nuremberg are close by for other places of interest, because Buttenheim doesn’t have much more on offer than this little jewel of a museum.
Posted by Uta Lenk at Thursday, September 26, 2019 2 comments:

After returning from South Africa I was all inspired, and really meant to write more about the textile experiences, as announced. But the next day my son and I went away for a few more days of vacation, and then... I had managed to wash the assorted fabrics that I had brought with me, but writing about them somehow went down the drain.

So while we are still on vacation I keep seeing references to the SAQA Benefit Auction 2019, which is coming up soon. As for several years I have donated a piece this year as well. As I was looking through the abundance of quilts on offer yesterday I made up my mind to create and submit a 'Dream Collection', too. Usually when I have done this,  I would keep my own piece out of that Dream Collection (at least as far as I remember), but this time I was not as secretive. Here is my Dream Collection for the SAQA Benefit Auction 2019, titled "Repetitive Forms" (or was it Shapes? can't remember, I went to bed right away afterwards...) 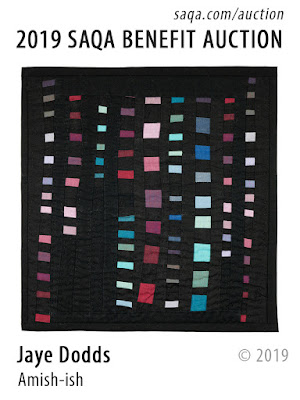 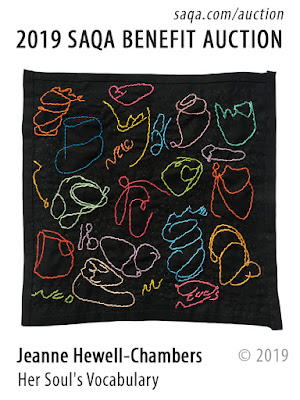 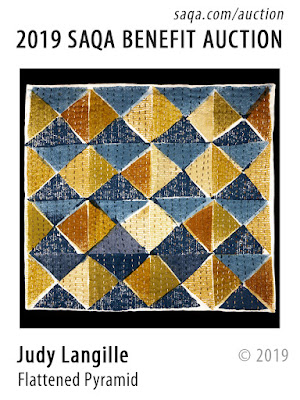 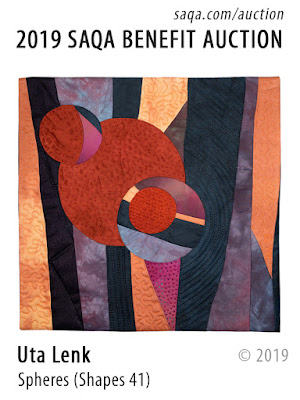 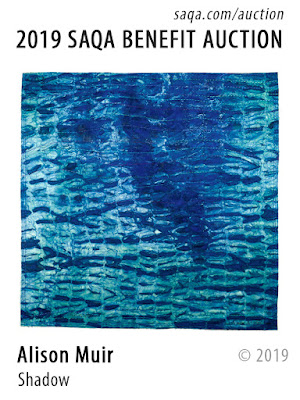 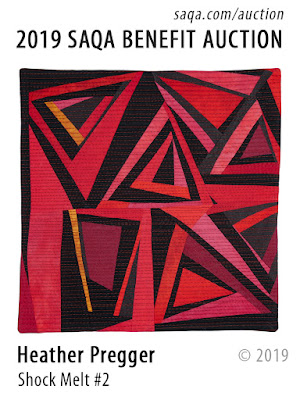 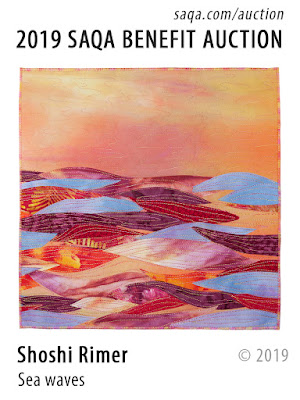 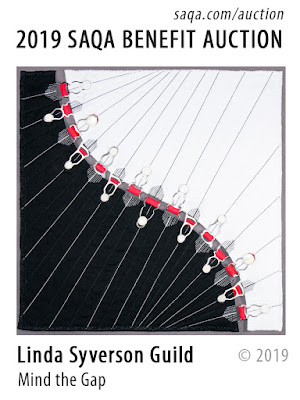 I noticed that there are a lot of pictorial pieces on offer - and I am not that much of the type for pictorial quilts. So it could be a collection with an entirely different name, and perhaps I came up with the one I chose only because it was late, I was tired, and it needed a title when all I had been doing was chosing the ones I liked on first sight. Yes, there were a few others as well, but ...

The SAQA Benefit Auction starts on September 13, and you can read how it works here. Perhaps you can find a piece that you find worthy of bidding for, you would help SAQA in its biggest fundraising event.
Posted by Uta Lenk at Wednesday, September 04, 2019 No comments: