Developments in the background 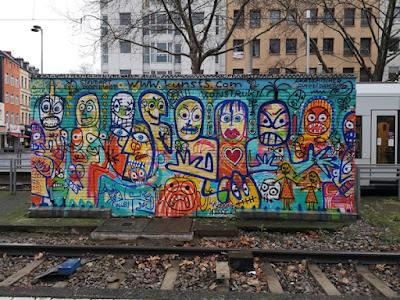 My son and I spent a few nice days in Cologne at the beginning of the month. We went to the chocolate museum, 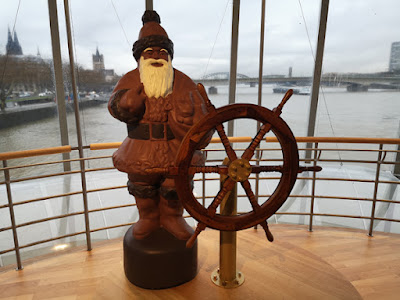 and one day we took the train to Bonn to go and see the Museum of History of the Federal Republic of Germany. This museum is free of entry charge, and it is so filled with interesting information that it is well worth going there more often.

Of course, that is not easily possible for us, living over 500 km away, but anybody who happens to be near should take the opportunity!

I was surprised to learn that my son claimed he had never heard of the famous Cologne Water:

I took him into the Cathedral where we listened to a short organ recital and prayer, sitting opposite the famous glass window by Gerhard Richter. 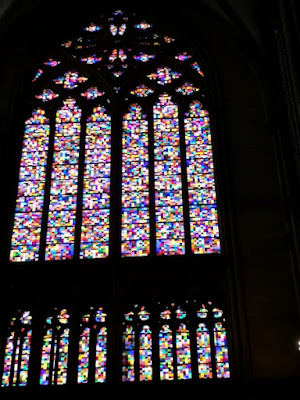 And I went and visited Ernst Barlach's Soaring Angel, couldn't leave the city without that. 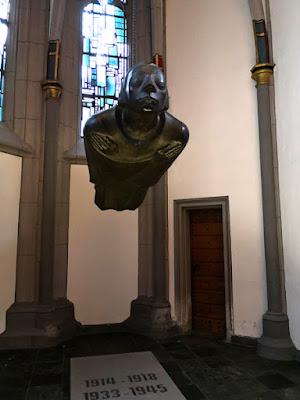 Then life turned very busy, as work became more intense again. Our hospital went back to full schedule in the operations room and thus I am not in danger anymore of being sent around to other wards ‘helping out’. Which means my period of vocational adjustment finally turned serious indeed. There are days when I am optimistic I will make it, and others when I think I will never be able to fit everything into my brain, differentiate between the various systems of implants for hips, knees, or get the whole procedure memorized... Today is one of the latter, but Friday was one of the former.

Meanwhile, some things have been happening in the background. It started in the summer, when Susan Callaghan gave a talk at one of the online meetings of the regional SAQA zoom meeting for SAQA Europe/Middle East. After finishing the talk she mentioned she was planning to start an international quilt group, would people be interested to join, get in touch with her... Initial difficulties with zoom links almost discouraged me completely, I had even started writing a mail in which I said I was not going to join the group after all, but something made me change my mind, and am I glad I did. The group has taken off with the speed of lightning, and today is our first reveal date, within the group, but we are going public in a few days. Here is a detail shot of my first piece.

More about this in a few days!
Posted by Uta Lenk at Tuesday, January 25, 2022 No comments:

For the second year in a row the shops were not allowed to sell fireworks prior to New Year’s Eve. There was only very little firework going off at midnight on the 31st. (I kind of like it –less air pollution, less dirt on the streets next morning... Why can’t we have controlled fireworks staged on that occasion without everybody just blasting about?) What will the world be like next year?

Just one year ago we were excited about the newly admitted vaccine – who would have thought that Germany would be carrying the red lantern in Europe in terms of vaccination by this time? So many extensions of lockdown that we endured earlier during the year should have taught them something, I would have assumed – but obviously people have not seen enough ‘effects’ of the virus actually taking its toll in terms of illness, and victims, to understand.  I always think people who refuse to get vaccinated should spend a week working on ICU, nursing somebody who is infected with the virus. Would it teach them something? (Perhaps not – even a friend from the course, who has done duty on ICU ward, is not getting vaccinated...) Anyway – that year is over, and here’s to a Happy and New one:


We were fortunate to have several days of sunshine in a row. Too warm for the time of year, but after seemingly endless weeks of dull and grey I could not but enjoy the sunshine. I went out with my walking sticks several days in a row, and it has done me very good to be out in the sunshine. 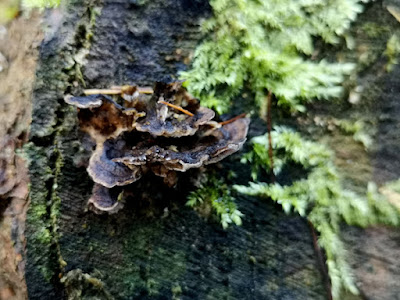 I have also done some sewing, some knitting – and today I sat down seriously with the intention to continue on the piece on the topic of ‘bridge’ that I have mentioned briefly before. Still not going into too much detail telling about it – but I decided on putting text on it, I assembled a few relevant terms, and started stitching. As with the purple monster I have again faced the difficulty of transferring the text onto the fabric if I don’t want to use dissolvable stuff that needs to be put into warm or even hot water. This time I used a different kind of transparent paper, which was very satisfying to sew the outlines of the lettering, as it is a bit more sturdy than what I used last time. 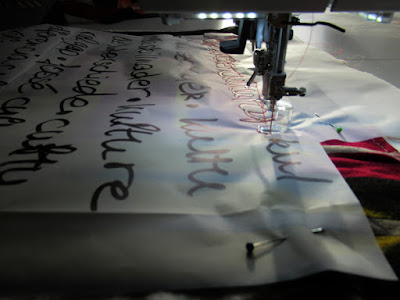 However, it has the same negative effect of having to be peeled off. 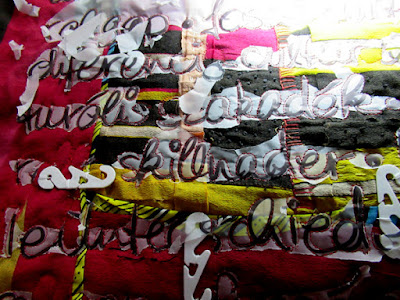 One (though admittedly, not the only one) reason why I don’t like to do any kind of foundation paper piecing is the necessity to remove the paper from below. Why on earth do I inflict on myself the necessity to remove the paper from the top? I may have to do some research as to other methods, or have to resort to completely improvisational writing, or work with templates again?

Yesterday I would have left to go cross country skiing with my son, had he not contracted a knee injury which prevents him from doing any kind of exercise. We are going to Cologne tomorrow instead. Not that this was on any position of the list of places I desperately want to go to, but he got to choose, and off we go.