This past week I was struck by an attack of dyeing frenzy. Two weeks ago, when I had been at the fair in Oberstdorf, I had realized I could use some stocking up on darker colours. 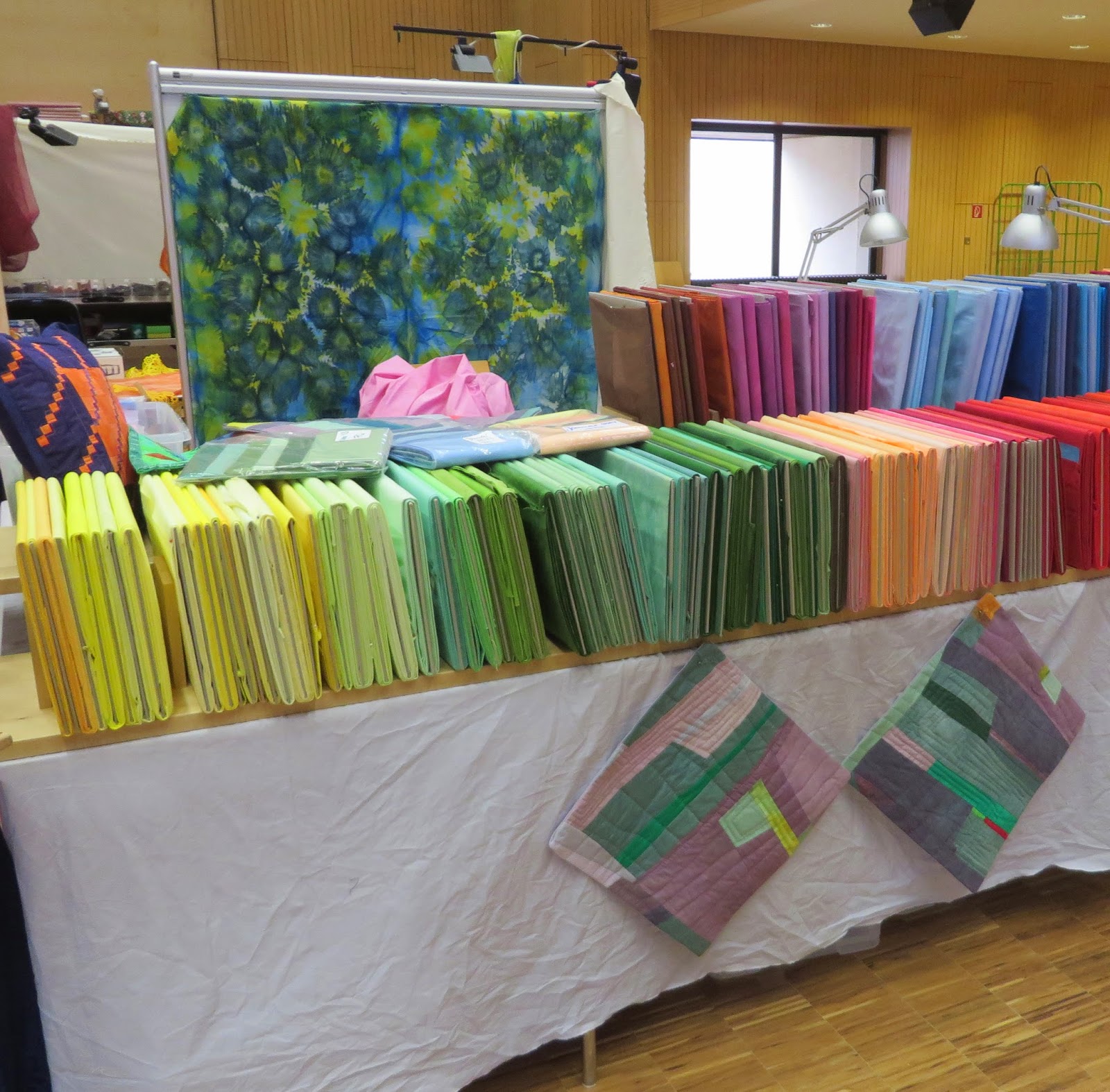 As I had to dye the March selection for the fabric club anyway, I just continued on. 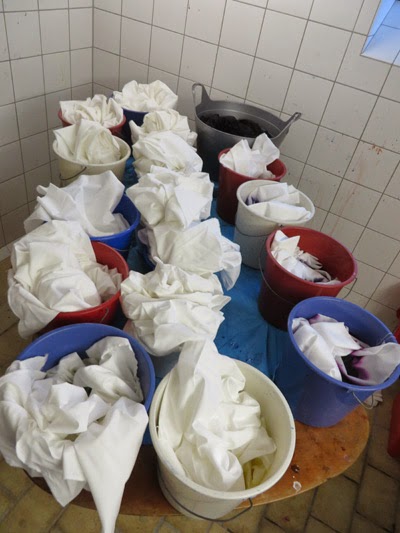 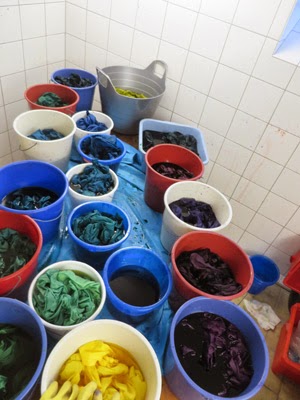 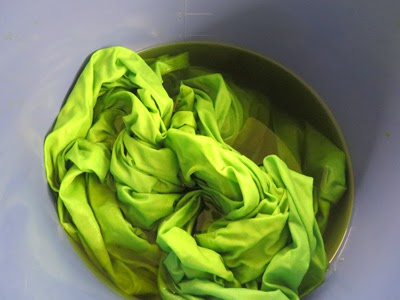 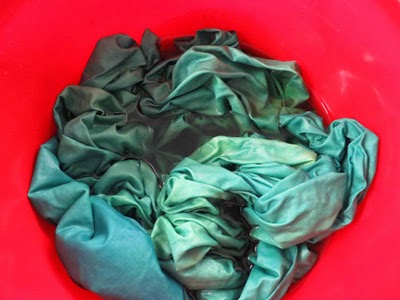 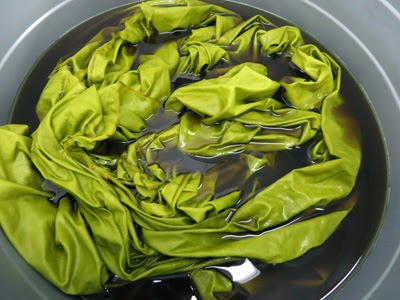 Basically I spent a lot of time in the basement, moving fabrics in the dye bath, or going up and down to check on the washing machine and dryer, which were taking their turns, or at the rotary iron.
And probably because the March selection was six different shades of gray, ‘non colors’ be academic definitions, I was struck by this attack. I kept coming up with new ideas, which I wanted to try out.
I did end up with some dark shades. But several other shades as well, that are not really that dark. I even had to resort to my smaller buckets, which I don't usually use any more as they are too small for the pieces that I normally dye.

Until I ended up without any fabric left that could be dyed... Now I have to wait for the next shipment in the beginning of May.


Meanwhile, I went to another fair with a stall today, that was much more successful than Oberstdorf had been. 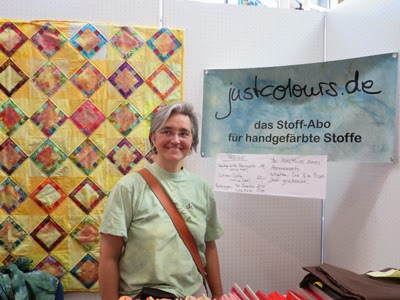 And upon my return home I left everything in the car tonight, as I am leaving for Prague Patchwork Meeting on Wednesday.
Posted by Uta Lenk at Sunday, March 30, 2014 No comments:

Margaret asked for more tree shadows. These are some I found recently. 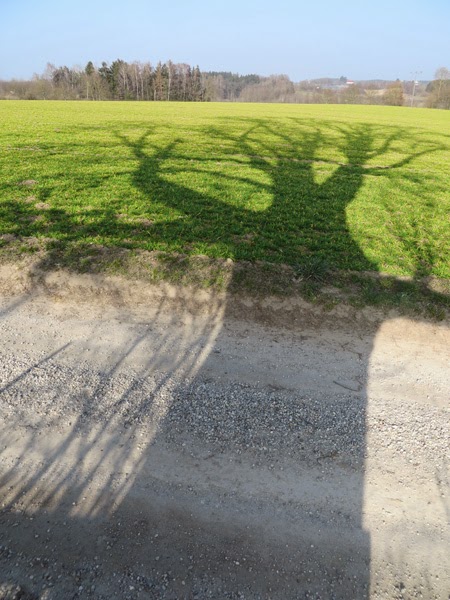 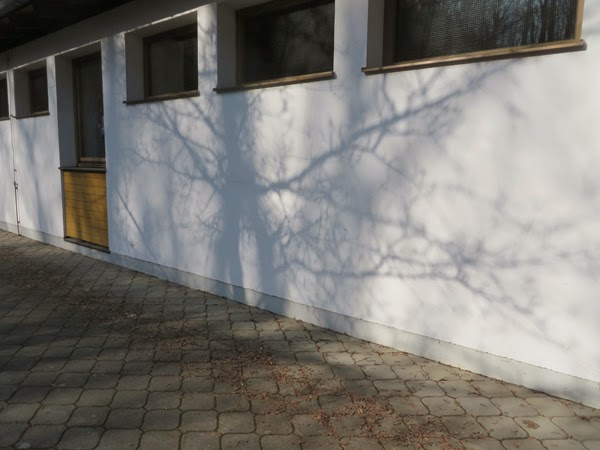 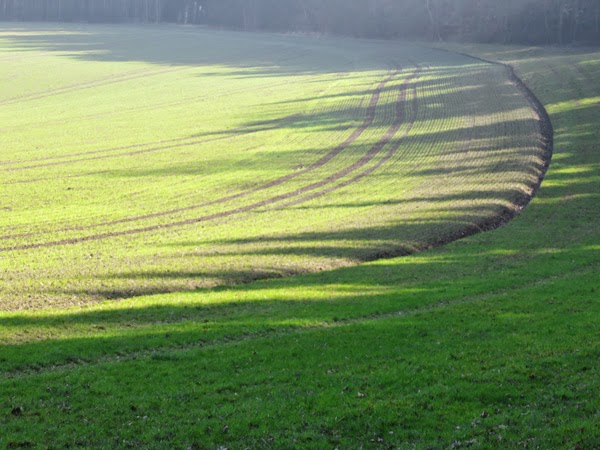 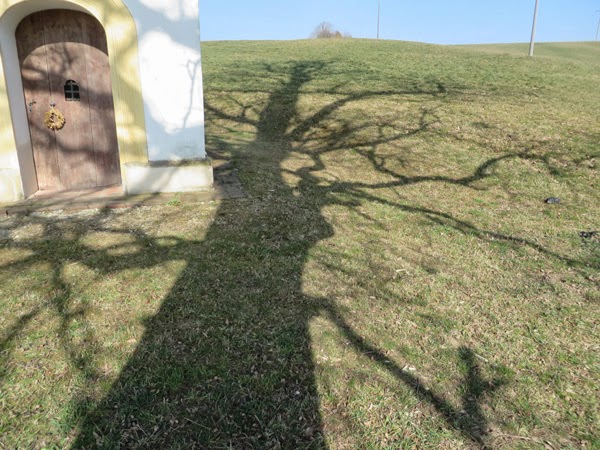 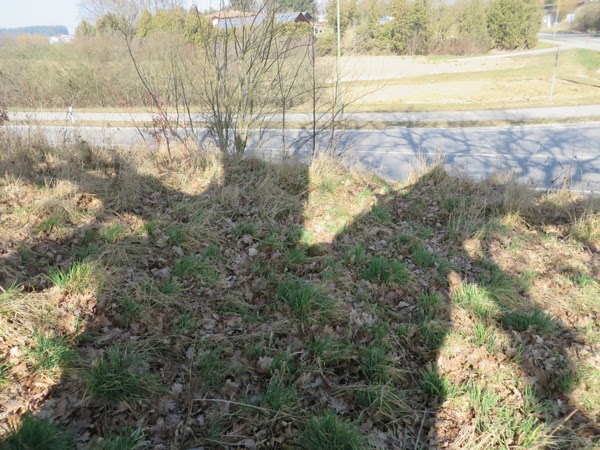 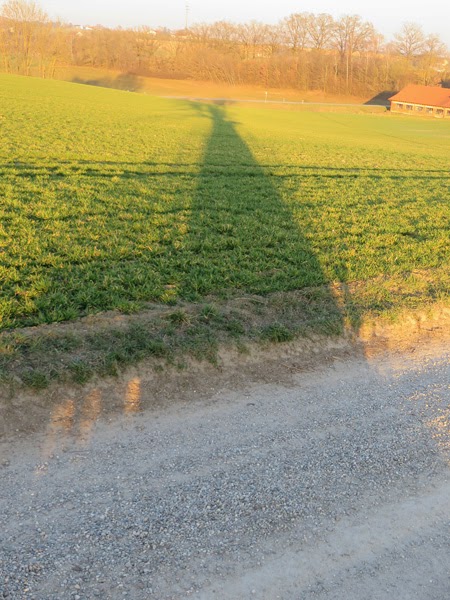 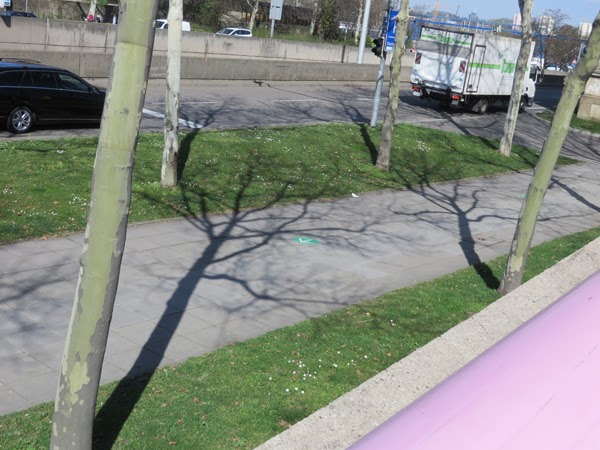 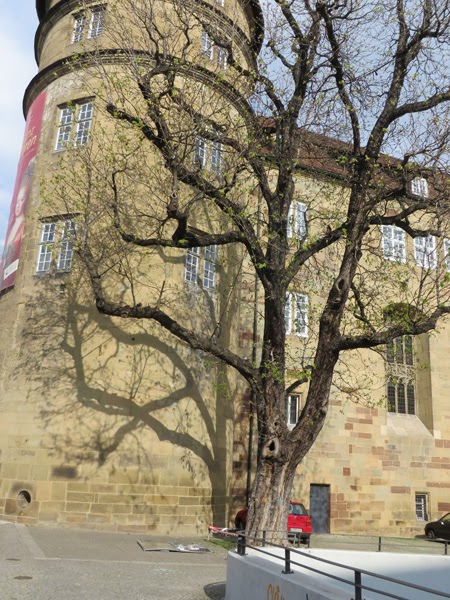 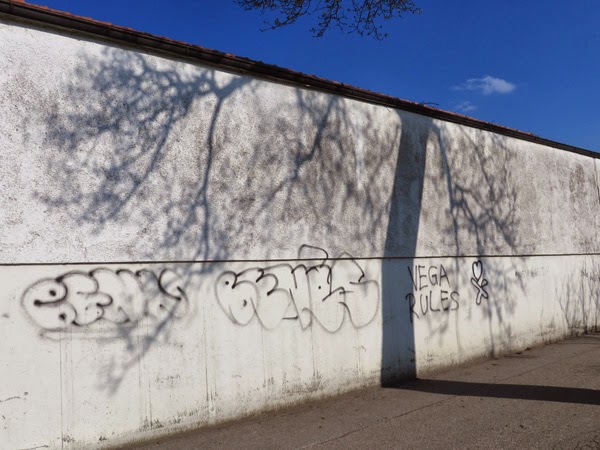 When I set up my visit to the Textiles in Art exhibition in Bielefeld in January, my husband had suggested that I take a round trip, continue from Bielefeld to Wolfsburg, and also visit the exhibition “Kunst und Textil” (Art and textiles) there. The two had been been reviewed together in an article in the newspaper, as they had opened at about the same time and had very similar runs. However, doing them both one after the other in January wasn’t possible, as my son was traveling with me and we had to get back for school after the Christmas holidays. And I had already resigned myself to not being able to see the exhibition in . But then I found out that this exhibition would be shown at a second venue, the Staatsgalerie Stuttgart, starting on March 21. Now that’s a shorter distance from where we live, in a direction where I am much more oriented – and I soon found a way how to combine a visit with other commitments.
This weekend I am teaching IQ for the Nürtingen quilt group. I had already made plans to combine this trip with picking up my quilts at after the conclusion of my exhibition there. And Nürtingen is close to . A bit of rearranging the travel arrangements – the exhibition had to be done before the workshop, as the museum would be closed on Monday, so I would also pick up my quilts in Freiburg before teaching instead of after.
Thursday I drove to Freiburg – with a lengthy bit of traffic jam that I circumvented partly through remainders of local knowledge from when I grew up in the area of . But traffic jams aren’t only annoying, they also give you opportunities for interesting photo shots. 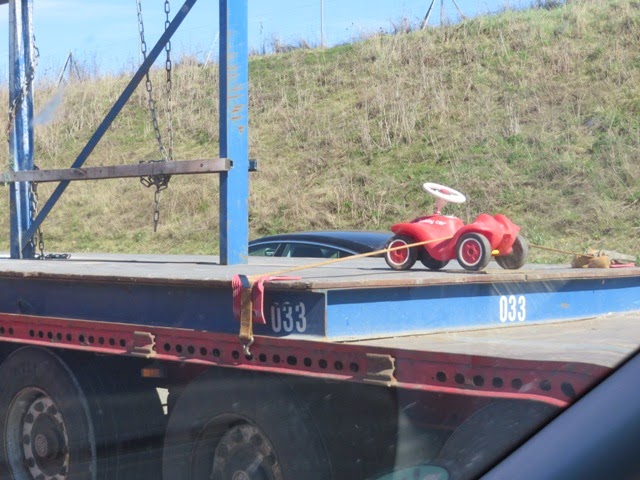 Taking down an exhibition is always much faster than putting it up. 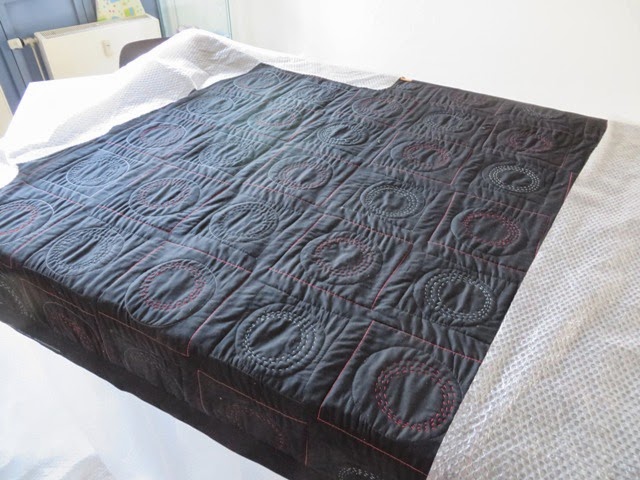 Spent the night with friends up in the Black Forest, and then on to . (No – my carbon footprint these days has not been exemplary at all. In my defense I can say, though, that I was smart enough to hop onto the S-Bahn from from Böblingen, my evening destination, which saved me the stress of driving in the city, finding expensive parking, and, most importantly, driving back there in Friday afternoon traffic.) 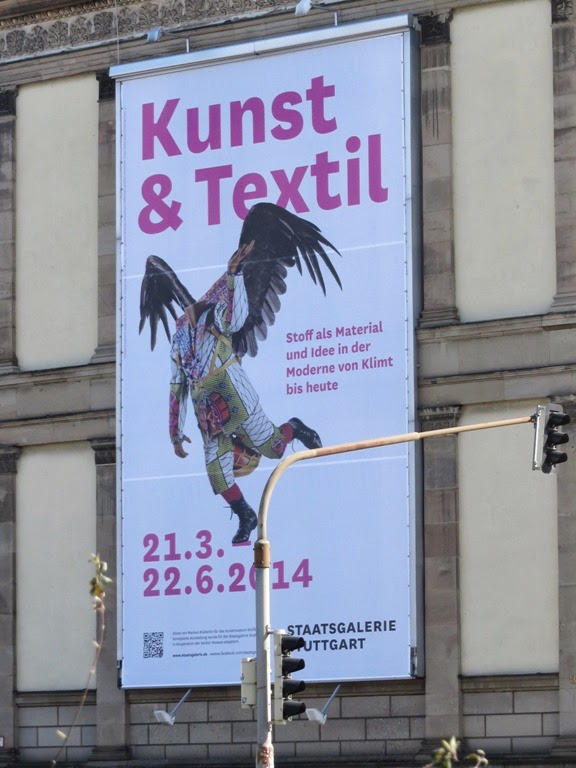 Of course, no photography allowed in the exhibition, and because I already have so many others I had decided in advance that I did not want to buy the catalogue, although the exhibition was very good and interesting. There were so many guards in attendance that I decided to be really good girl and not take any illegal photographs. A few overlaps occurred with the exhibition in in terms of names of artists on display, but obviously this would mean other works by the same artists. The exhibit in Stuttgart puts slightly less emphasis on the Bauhaus-effect in textile art than the exhibit in Bielefeld did - it mentions only Anni Albers from amongst the Bauhaus women, with more emphasis on her works after her emigration to the US and her influence on ‘fiber art’ as such. Pieces of Raphia fabrics from Kongo or a large piece of Tapa fabric made from bark fibre from the Fidji islands show interesting correspondences to modern day design as it is familiar to us today, a felt cape from an Anatolian(?) shepherd, a tribal belt or necklace with tied knots and a divan cover from Bauhaus and are juxtaposed with works by Birgit Dieker, Ghada Amer, Brice Marden, Mike Kelly, Joseph Beuys, as is another Mappa by Alieghiero e Boetti from the 1970s with two small hooked rugs from Afghanistan in the best tradition – with military helicopters and war machinery as their ornaments. That certainly gave me the creeps.
My absolute favorite piece in the whole exhibition was  Lenore Tawney’s piece. (Lots of pictures of her works here and here.)

The audio-guide did not really live up to my expectations for a its cost of 5 euros, in fact, I consider that a complete rip-off. Though it was fun to listen to a few of the pieces in the children’s tour, which I did when no ‘adult’ number was listed. If I hadn’t wasted this amount I might have relented and bought myself the catalogue after all…


Definitely a must-go for anybody who is interested in textile art and gets to go to in the next few weeks!
Posted by Uta Lenk at Sunday, March 23, 2014 No comments: