The national German Patchwork Guild has always been issuing annual challenges for members. During the first lockdown one of our web editors started a sew along project called 'stars of hope' and  published a star pattern every day for three weeks. The results of this are going to be presented in our next, upcoming exhibition in Meiningen (May 27 - 29), and during the recent workshop at Petersberg I persuaded 'my' graduated patchwork kid (she is turning 20 in May, not a kid anymore) to finish hers in time to send to Meiningen as well.

Currently, a sew-along is on that is called "the online quilter". You can see photos of first completed blocks here. The blocks are all related to digital stuff that a quilter might need - self-drafted by our web editors, and published in a two-fold manner: each block is completely open for a week, and then for members in the members' area without limitation. I have contributed a few photos to the instructions, noting how I take the steps, but Barbara Lange did the write-up, as that is definitely not my strong point. But I am happy that I could contribute at least a bit to the entire project, even though I am not sewing an online quilter quilt for myself. 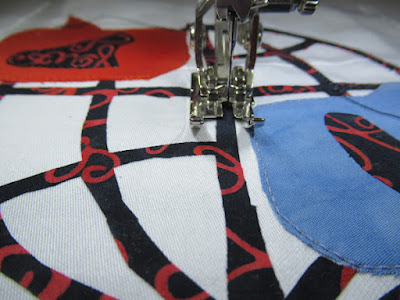 I did join the challenge of the Guild, when I found out that a few of the fabric kits were still available a few days after they had gone online. This is a challenge that was planned as a support for guldusi, the embroidery project by the Afghan German Initiative, which I have written about before. The plan was drawn up early last year, and published in the fall issue - after the situation in Afghanistan had changed dramatically and when the possibilities and options for the initiative were completely unclear. The original plan had been to support the project, as one requirement of the challenge was to  include a piece of guldusi embroidery in the quilt that was based on the fabric/thread kit received by each participant. Because I have a number of embroideries from Afghan women in my stash I decided I would include a few of them in this piece, and instead of buying new ones I will make a monetary contribution when I am finished. After all, I did support the initiative when I bought these pieces I already own.

The topic of the challenge is 'pathways'. I had once bought a piece that shows a soccer situation - for my son, when he was still playing soccer. (He has since become an avid basketballer.) A famous quote from one of the legendary national soccer coaches translates as "the round thing must go into the cornered thing", and I figured that is a description of a pathway, so the original German quote is the title. I am including a few more embroidered pieces, three round and two square ones, the kit fabric, 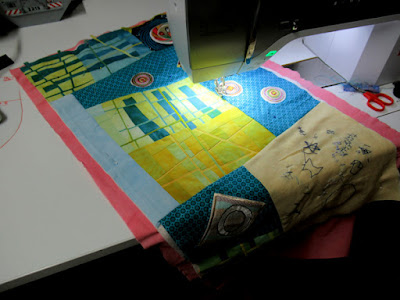 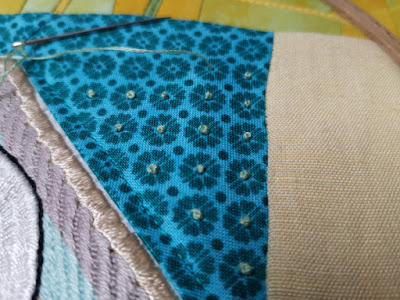 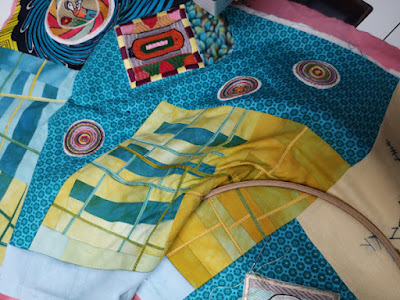 and a piece of embroidery (signed!) by my then probably 7 or 8 year old son, when he was still playing soccer, and which I have kept since he made it. 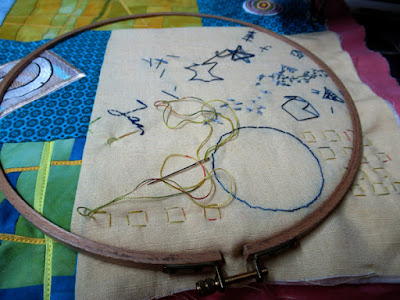 Right now I am debating whether I should attach these silk cases. 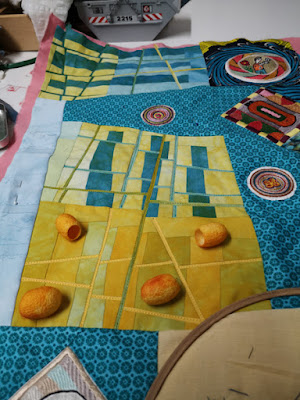 And of course, while I am stitching, there are the terrible news about Ukraine. Yet another war situation that leaves you speechless and heartbroken. I don't think posting blue and yellow pictures on social media is a good way to show compassion or support. However, these arranged blocks I have found on my table in a way symbolize the broken feeling that is overwhelming right now. 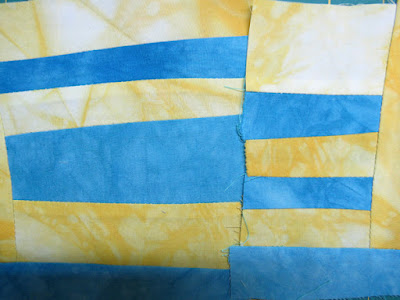 The entire situation and how it came up  'reminds' me of something similar - although I was not there in 1938. How could the politicians not see this coming? How could they not understand that the most extreme measures were necessary instead of this economical-thinking-driven appeasement of a guy who has repeatedly shown that he will go to the extreme? How could Germany be such a hesitator in negotiations? I am ahsamed at the 'offer of help' of 5,000 helmets which the Ukrainians were then supposed to come and pick up in Poland. What a sad sad joke. At least the chancellor has changed line of action now, but isn't it way too late? I am completely at loss right now.
Posted by Uta Lenk at Sunday, February 27, 2022 No comments:

As I mentioned in my last post, interesting developments have been taking place. It all started in July when I joined one of the bi-weekly zoom meetings for the SAQA Europe/Middle East region in which Susan Callahan said she wanted to start an international group. I considered for a while, then decided I was going to give it a try. The first online meetings posed some difficulties because zoom links were not correct, I was on vacation with weak internet connection, whatever. I had even written a few sentences already in which I said I would withdraw, but on the spur of the moment gave it all one more try. Then, finally, it worked, and the group has taken on momentum since.

At first I thought I would not be able to do a whole lot in terms of the administrative things required, but then it was I who started the WhatsApp group. (That’s easy, and not a whole lot of work.) We started discussing about frequency of challenges, size of pieces to be submitted, and when would we start. Suddenly we (that is, Paula Rafferty) were developing a website and writing blog posts to introduce ourselves. And then somebody suggested ‘let’s just do the first challenge with reveal day by the end of January’. The topic chosen was ‘bridges’, and I have described on the 20Perspectives blog how the piece took on a life of its own until it looked like it does now.

We are trying to establish and improve a presence on social media. We have more topics coming up. But we also have a first chance at exhibition with the Bridges collection because of a coincidence. For this exhibition all members have made one piece each, but we are also preparing a joint piece: every (participating) member is working on one of fifteen slices of this picture of Pont Neuf in Paris, which I took in September. Probably one of the more frequently photographed bridges in the world, but splitting the picture up into fifteen pieces is going to give a rather different outlook onto this famous piece of architecture.

I have only started to pick out fabrics for my slice of the bridge, and will hopefully get to work on it a bit on the weekend. It has certainly been a creative booster. I am really glad I did not send that mail that would have set an end to all of this before it started.