It is bitterly cold, has been for a week or so, today it is below -10 degrees celsius even during the day. Usually that kind of temperature (which we don't have often) goes along with easterly winds, and they come up the valley, making the top ripples on the rive go 'upstream'. It never is a river with a noticeable flow (unless it is flooded, which happens infrequently as well), and the spot where the downtown bridge crosses over it is rather flat, so the direction of the flow is not necessarily noticeable from looking at the surroundings.


It has been so cold that I have seriously curtailed my walks or activities outside, and I am not a chicken in terms of temperatures, but the winds are just making it entirely unbearable, despite the fact that the sunshine is brilliant and luring.
So my brief walk a couple of days ago yielded a few pictures of marks, shapes, textures. 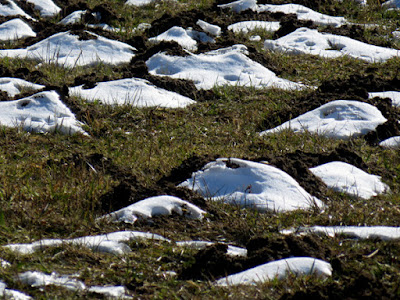 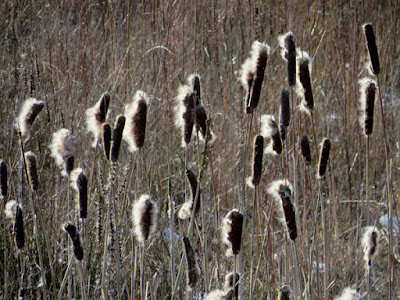 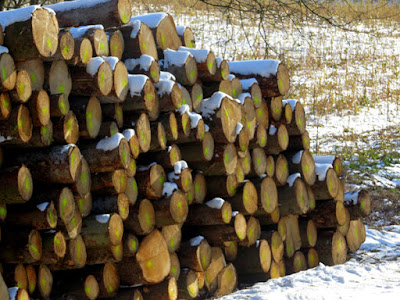 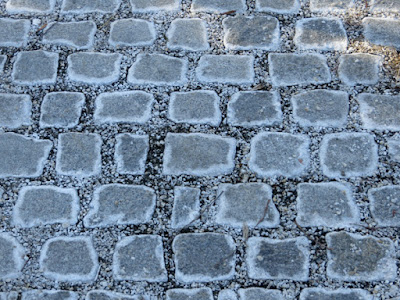 And a brief contemplation about why I haven't chosen this tree as a tree for observation and frequent photography... 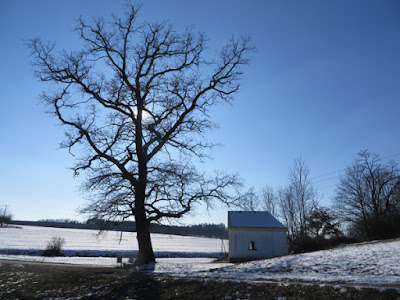 Then I remembered - it's not been considered 'old enough'. And it is an oak, and I have done an oak.
Stitching is slow these days. A bit of quilting for the 70-273 Project, sending quilts out to be bound, too, and a few thoughts about things I could be doing. Thoughts only, as there has been only little time of leisurely contemplation because of the issues for the Senegalese friends. They have by now been allowed to move back into their former accomodation, and we hope that the neighbors will be more understanding, less hostile, but as of this moment we don't know. It's so cold they have kept their windows entirely shut. However, from the situations I witnessed when I happened to be present and the neighbor was beginning to have a go at them I must say that his reactions were completely overdrawn. So we will have to see when the weather gets warmer. Another issue was that one of them had received a warrant in summer for being in the country illegally and supposedly not having done enough to obtain a passport. In the summer he was acquitted, but the prosecutor was not satisfied and took the case to the next level, claiming it would have been possible for him to take more intensive action. So we have been busy writing letters, e-mails, trying to get statements about the ease with which somebody who never has had a birth certificate that he knows of could obtain such a birth certificate from outside the country of birth. Believe me, you don't want me to go into detail about all of this, neither do I want to do so here. But it has been keeping me busy, occupying my mind, and tying up my energy. Add to that the fact that this particular person is a very closed and difficult person, not easy to deal with, and I have to admit I don't particularly like him. But he lives with these other friends of mine, he turned to me for help, and I just felt like I could not let him fight this alone, especially because I think the way he was being treated was cruel, unjust and in my opinion even unconstitutional and against the law. Basically the prosecutor was demanding that he get engaged in corruption to obtain a birth certificate - definitely not something a prosecutor should be doing in a state that prides itself on its constitutionality and righteousness. In any case, today was the third (!) hearing in this case, which had also been postponed once, and he was acquitted again.
So I am very happy about this. Another minor victory, because it is only one case in court, and that does not mean that the authorities will take note of this case for other procedures. But we can refer to this. And he does not have to pay for the lawyer. That is a major aspect of it all. So two small victories within the last ten or fourteen days, that is something. The battle is not won yet, and a lot of fighting remains to be done. But I can be a little proud about myself. And I am.

I hope my mind will loosen up a bit now. I need to be doing more stitching. I did finish the challenge for the 12 by the Dozen that was supposed to be published on the blog today. Except for the binding.


And I hope that the ideas swimming around in my head will materialize, turn out to be feasible.
Posted by Uta Lenk at Wednesday, February 28, 2018 1 comment:

Just about over a year ago I started knitting a 'modular jacket' from an interesting book with knitting instructions. 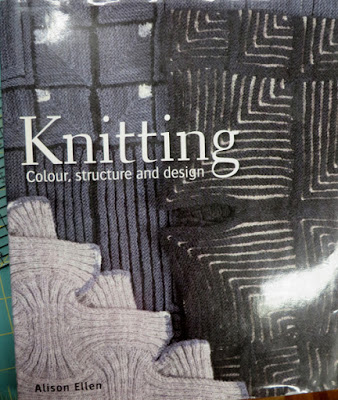 It had looked really good on the page, and I enjoyed knitting the squares, too. But somehow along the way something about it changed. It wanted to be something different. 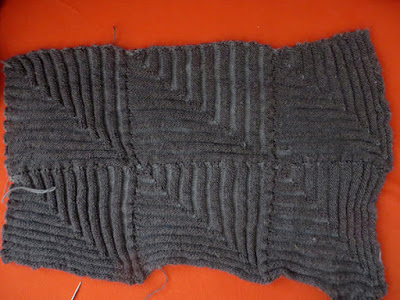 So I watched and listened to what it wanted to be. And gradually it turned into a scarf.
With a bit of different colour arrangements, and other colours added, too.

And then I added a red I-cord on the outer edge. 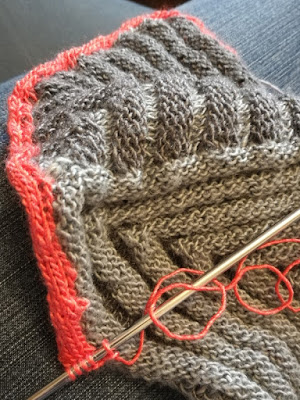 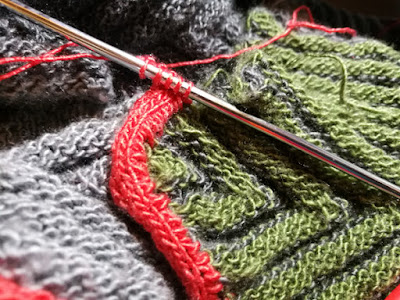 Unfortunately, I had started the I-cord while I was in England, not having the book with me in which it was described how to do it - and not even thinking about the possibility of looking it up on youtube to see the exact way how to do it. I remembered some steps and thought I could get it done. I did get it done, but I am not too satisfied with the way it looks. I am most certain nobody will ever notice what I don't like about the looks, and I am telling myself that I, too, will get used to it.

It's a minor thing, can only be noticed when you look really closely. But it bugged me so much that I then finally came up with the idea of looking it up, because I wanted to know what I had done wrong. So now I know, after finishing the whole round, and for the next one I will not make the same mistake again. I hope this is a scarf that will stay with me, because only a couple of weeks ago I gave away another one, the one I made for the knit-along a while ago. Somehow all my scarves tend to want to go with other people...
And, affter all, the jacket pattern is still talking to me, there might be a second attempt... perhaps that will then really become a jacket.
Posted by Uta Lenk at Monday, February 19, 2018 No comments:

Email ThisBlogThis!Share to TwitterShare to FacebookShare to Pinterest
Labels: Knitting

keeping my head above water...


The past two weeks were extremely unnerving.
On the one hand the coalition talks in Berlin. They still haven’t resulted in a functioning government and it is annoying to see how one of the parties involved is delicately dissecting itself with people grabbing for power and fighting within the ranks, with a scheduled vote of members of the party that seems to be highly unconstitutional that could make everything go down the drain after all.  Germany is not immune to many dangers on the European floor right now. We have such a lot to lose…

On the other hand, much closer to the personal realm, I witnessed a very unpleasant and disconcerting ‘relocation’ of three Senegalese friends of mine which has left me completely shocked about the way that authorities deal with these people. Not that I was expecting much anymore after various experiences I have had during the past two years, but there is always room for worse, it seems. I don’t want to go into detail about all this, but in the wake of that I spent several days in meetings that took a lot of strength. In the end an agreement was reached that this relocation would be repealed, which was at least a success of some sort. Nevertheless one does get the impression that one is fighting a losing battle, and what is a small victory in the context of a losing battle…?
I also accompanied one person to a court hearing that dragged on forever, is not finished yet and has been postponed once again because the lawyer is in hospital.

I had one week of a double teaching load, including a severe case of conflict management in a class that I had only taught six lessons before this came up.. I had agreed to the double teaching load in advance, but I had not anticipated that all of this would come together… By the last weekend I was ready to drop, and I am more than glad that this week no teaching at all was scheduled because of a week of school holidays.

I also quilted for the 70,273 project, sorted and arranged another top that had to be sent out to be pieced, distributed several other tops to be quilted or finished. We are preparing a show of some of these quilts for the German Patchwork Guild’s AGM in June, in Celle, and by now I am getting to be pretty positive that we will actually fill all the wall space we got. At first I was a bit nervous that we might not have enough quilts that were made in Germany because it was taking a little while until the whole thing started to roll. But meanwhile I know about so many quilts out there still that I am more relaxed about it. It would have been embarrassing to have a show in Germany with nothing to show! 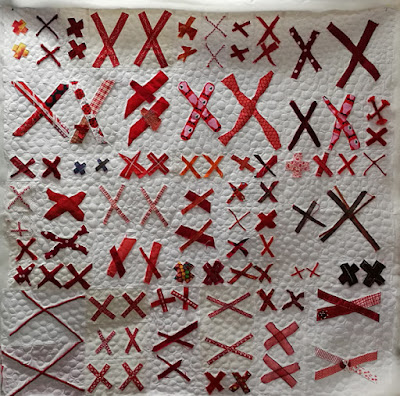 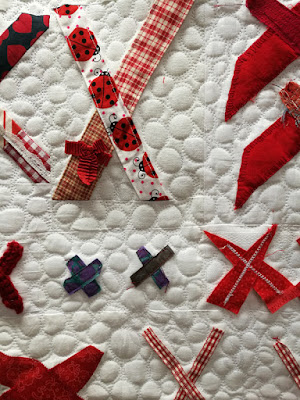 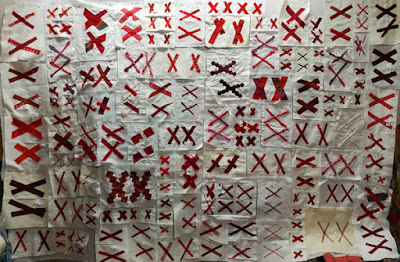 I also took action in working on the next piece for the “12 by the Dozen” group which will be due by the end of the month. This time the challenge is to work on the inspiration of works by Vilhelm Lundstrøm, an artist whom, I admit, I had never heard of before. It took a while before some idea came, and now I am putting in hours on the machine, when possible. Although I don't want to disclose too much before the reveal date, a teaser picture can be shown here without giving too much away: 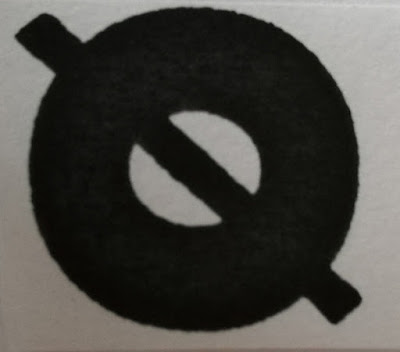 I hope to get finished in time…
Posted by Uta Lenk at Saturday, February 17, 2018 No comments:

Email ThisBlogThis!Share to TwitterShare to FacebookShare to Pinterest
Labels: 12 by the Dozen, The 70273 Project

For the first time a quilt of mine will be shown in Japan. I just read on the SAQA-Blog that Abstract&Geometric Masterworks is going to travel there and am pretty excited.
I have also received an invitation to apply for participation in an artist symposium here in town which sounds like it was written for me... so despite the fact that this week is a very stressful week due to many things going on on a different plane than making art perhaps it is at least going to be a good week for my art in the end...
Posted by Uta Lenk at Thursday, February 08, 2018 1 comment: