Over the last few years Instagram has become one of my sources for inspiration, information and interesting stuff. Looking at pictures posted by people and on hashtags I follow, and looking at hashtags below, and then clicking there… Certainly a way to spend time, sometimes waste time, but often a way to find out about things I had not heard of. So through some way on Instagram I found out about and ended up in Munich last week, at Haus der Kunst, with the exhibition “Triumphant Scale” by El Anatsui. I have to admit I had never heard of him, and I hadn’t been too good about keeping up with the exhibition schedule in cities around me.
It was absolutely impressive, almost overwhelming. 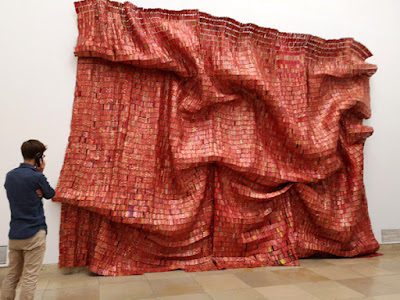 I spent a good while walking through the labyrinth in the large hall. 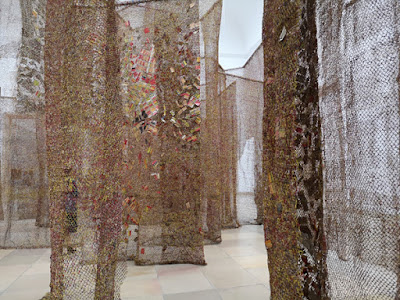 Quite a while ago I had played around with the idea of constructing a labyrinth for exhibition visitors to walk through, some see-through arrangement of fabrics, I think I was considering using organza and various loose combinations. It never materialized because I could not seriously figure out how to do the hanging from the ceiling. And I guess I was not persistent enough to push it through – I also thought at the time it was a bit wild. Now that I see that it is indeed possible I realized some of my ideas might not be too far off from being good and interesting ideas. Except that it has been done by now, and it wouldn’t be original anymore and… oh well. Another possibility to become famous gone down the drain… Not that I am comparing my stuff with El Anatsui’s…

Of course one wonders about how the masses of bottlelabels, 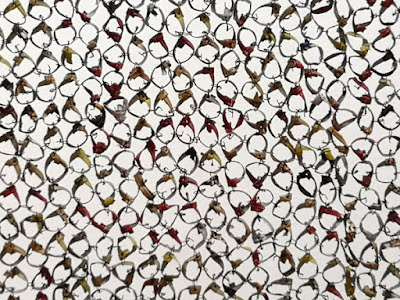 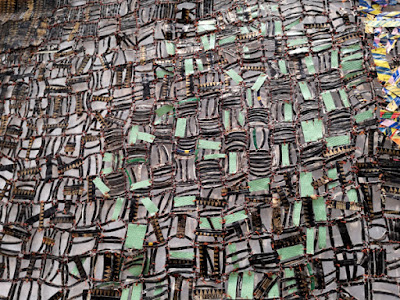 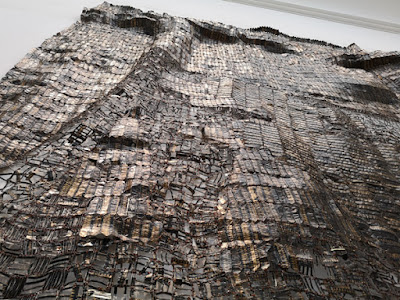 and it was interesting to read that it started with a found bag of bottle labels that he picked up somewhere and then had sitting in his studio for quite a while. My son is always completely embarassed when we happen to be walking down the street together and I stoop to pick something up. So far I have withheld from picking up bottle caps – although my environmentalist mind scringes every time I see one lyeing around. And there are many many many lyeing around. It is simply annoying to see how people just throw stuff like that around. Even if I had been picking them up I would still be far from amassing enough to put them together into a decent-sized wall-piece. But the audio guide said El Anatsui’s need for bottle labels has become known all over Nigeria by now, he buys the labels from a distillery … My son would be even more embarrassed about his mother if I started picking up bottle caps as well.

There are sketchbooks to see, 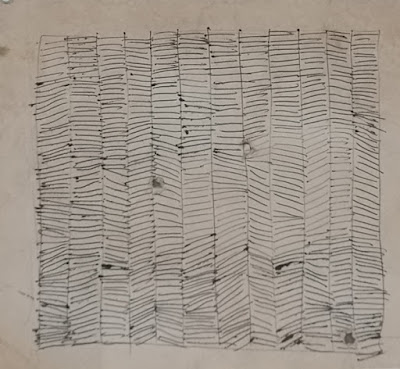 and I also loved his wood carvings. 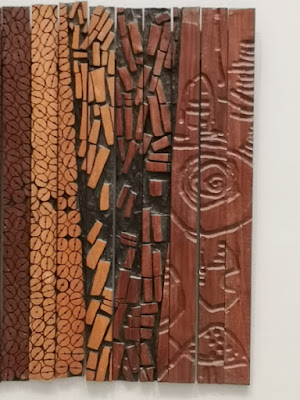 A very inspiring exhibition! If you can get there before July 28, by all means, you have to go!
Posted by Uta Lenk at Sunday, June 23, 2019 3 comments:

Over the past four and a half years I have repeatedly written about my voluntary involvement in a network for refugee integration here in our town. I have tried to keep it out of my posts lately because Germany's policies in this area have been so utterly frustrating and dis-spiriting that it would have got me even further down if I had written about that, and as this is not supposed to turn into a political blog, it felt like it did not belong here.
But today I have a success story to tell about, and that is so uplifting and positive that I will not not talk about it.
We had a surprise visitor this afternoon from a young Syrian whom I met for the first time 4 1/2 years ago at the first 'international café' we organized to get the help circle organized. He was 24 at that time, had been in Germany for just over 4 months and although we were mostly conversing in English he had already begun to teach himself German and was translating for his fellow Syrians. I took him on for one-to-one German tutoring, and he learned quickly.


By September he enrolled in the second year of the two-year preparatory 'integrating school class', finished and then began a German-style 3-year vocational training for IT with a global company that has their central seat here in town. It wasn't always easy, and for the first year he still kept coming to my house for German tutoring. But he persisted. We kept in touch, of course, even after he had said that he would not come for regular tutoring anymore because he felt he needed to concentrate on the other subjects (by then he had become fluent enough in German that I let him go with my blessings.) And today he came by to tell us that he had passed the final written exams, that he has a contract with a firm in the next city - and that the firm he is graduating from now has sort of offered him a very prestigious position for within a year that I can't go into detail about here because he hasn't decided whether he is going to do it or not.
His German is almost completely flawless. His vocabulary is impressive, and  I am SOOOO happy for him! I am pleased that I could be a part of this success story - I have to brag, because we spent many hours working ourselves through the intricacies of German grammar. And I think it is necessary to write about him here because with the right-wing backlash we are experiencing in the country right now it is vitally important that stories like this get out into the open. It took a bit of time, and other Syrians may take a bit longer even, but several of his roommates of that first year in the asylum-seekers apartment have found steady jobs by now, or are also getting ready to start vocational training with renowned firms. I wish the public would point their attention to this instead of badmouthing refugees. He has not turned German, but he has found his way in the German system. He has learned many things from me, and I have learned quite a few things from him. This is a special kind of friendship that has developed. And Germany is so much richer for people like him to live here. All we need to do is open up our hearts to them, give them time to grow and our time to support them, instead of only demanding that they 'integrate' themselves into German culture.
Posted by Uta Lenk at Saturday, June 08, 2019 3 comments: