Last week has been a constant attempt at juggling practising on the longarm machine and dealing with issues of the refugees.

Although I had thought I would really start quilting a 'real' quilt yesterday I had doubts when I took the practice piece down. So I put up another practice piece instead, and decided it would be good to work on that. This morning I was determined to 'don't do any refugees' issues' befor 10 a.m., but simply practice, practice, practice. I did not start my computer or look at my phone for potential messages - and by 10 I had only had two calls concerning the refugees. So that was pretty good. At least I hadn't taken any initiative...

I am practising swirls and patterns and this and that and getting to know my machine. By now I can tell when the sound changes that this is when the bobbin thread is getting low, so I guess I can claim that I am beginning to understand my machine. 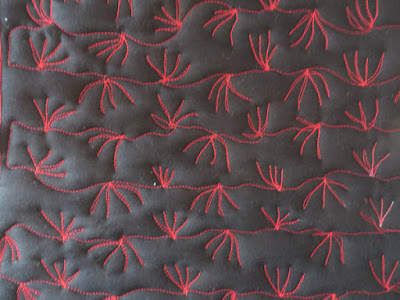 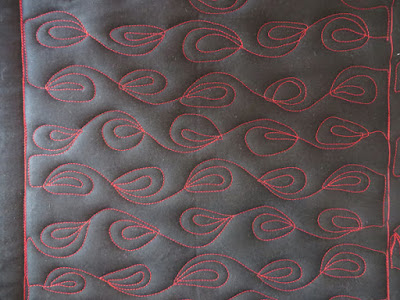 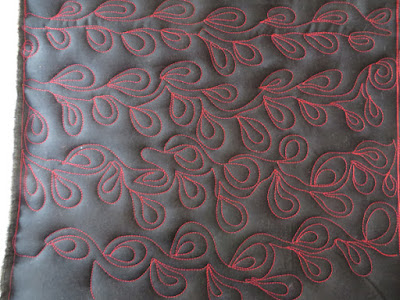 Ten o'clock a.m. was the crucial point of time because a friend had said she would come by, who has been waiting for me to finish a quilt for her for almost a year now, and she will be one of the first ones to benefit from me doing a real job. We picked the thread color for her, and as she said she wouldn't mind beginner's inconsistencies hers will actually be the piece I mount when I am done with this current practising piece. At some point one has to take the plunge!

Meanwhile, I have learned the hard way that working in a group of volunteers is anything but easy, mostly because of the fact that volunteers tend to have their own ways of dealing with things, and some are not at all compatible to working in a group. Last week was extremely difficult in this aspect, and it has cost me a lot of time and nerves to the point where I was thinking should I give up just to get that particular person off my back...? Of course, she could be saying this about me, too, but as I know that she has a history of being in discord with any person of authority (who does not do as she would them have do it) I don't see the major part of the problem on my turf. Anyway -
Tomorrow three of the Syrians are going to Munich for their interview and I will go with them. Leaving on the train at 5.39 a.m. The major worry I have is that they are observing Ramadan, it is supposed to be very hot tomorrow, and I certainly don't want either of them fainting in a situation of stress when they have to tell their story. I have suggested that they allow themselves one day of break from Ramadan and at least take a bottle of water, but I am not sure that they are willing to do that. But I have told them that I would not go with them to hospital should that happen, so they have been warned, and as they are all grown-ups it's their decision. We'll see what happens!
Posted by Uta Lenk at Monday, June 29, 2015 4 comments:

It's been two weeks since Patricia from Handiquilter came to my house to give me a thorough introduction to my longarm machine. She managed to figure out what was wrong with the machine, why I had been having the tensions problems after setting it up, and it has been running without any problems since.
I have been practising, and those have been happy hours, I have produced a stack of trial pieces. But not once have I had occurrences like this again:


I'm trying out patterns of my own 'design' mostly, just working to get the feel for the machine and its movements. 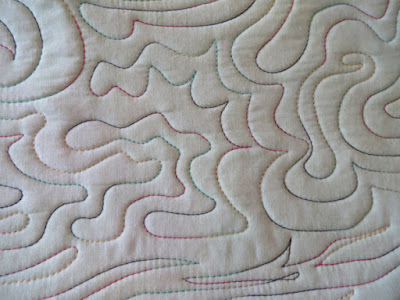 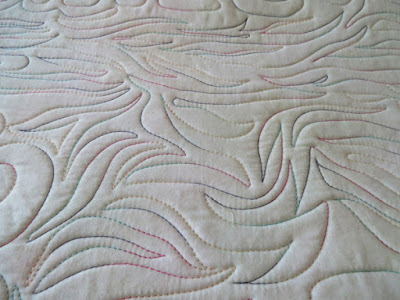 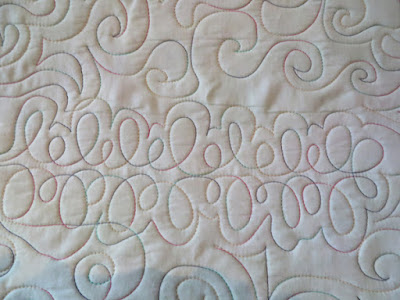 Nothing spectacular yet, and only on remnant pieces of fabric. I've used up most of the remnant batting pieces I had been saving, too, and after taking down one trial piece today 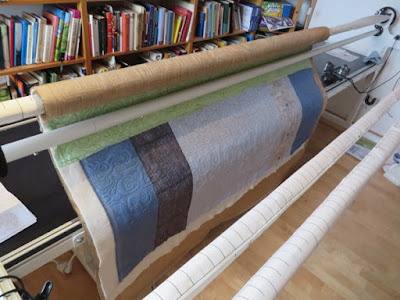 I have just finished mounting what I have decided will be the last complete trial piece. 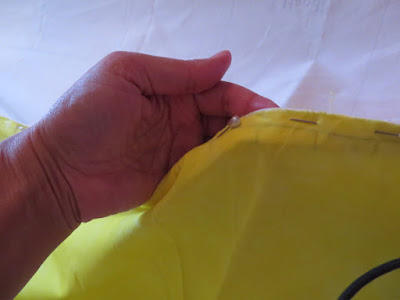 After I finish practising on this one, I will start doing 'real' quilts. I have found a small piece, a Triple Irish Chain, which I made for a class demonstration and never got around to quilting, which will be the first serious quilt I put up. Then  there are several pieces that were exercises in Nancy Crow workshops, which I will piece together to make a perfect picnic blanket without any artistic value and very suited to trying my hand at going over a bigger piece.
And then there are three larger tops already waiting in line - one for my son, one for a friend of mine, one another result of workshop demonstration pieces (blocks of stars). After that, I will be ready to  take in orders.
Posted by Uta Lenk at Monday, June 22, 2015 3 comments:

Reflecting on reflections... - or: size matters, yet again!

Monday would have been the deadline for the challenge in Ste. Marie-aux-Mines, except that it was extended by a week, so the 22nd is the date when I last may enter my piece. Last year I missed the deadline although I had made one quilt specifically for that topic. This year I certainly don't want that to happen again. No, I really don't. Especially since Gul La Porte from Carrefour has remembered to remind me of the deadline when we last met - couldn't ever face her in person again, should this happen one more time!
So last Saturday I was working on the facing, had finished the two sides, and then had the brilliant idea to measure the piece. I knew it was going to be slightly under the 130cm length restriction, but I was planning on it being within the 5% tolerance margin. Good I measured before I had finished the top and bottom binding and the tunnel, because - seems befitting to me by now, as I seem to keep running into size restriction problems - of course, it was not a whole lot but definitely shorter than that. Not within the tolerance anymore. And no superfluous batting extending on either top or bottom. Can you imagine how I felt?
So after a telephone consultation with Kathleen Loomis, who did a wonderful job of easing my aching soul, an exchange of photos and e-mail suggestions and after taking off the finished side pieces of the binding I spent a lot of time on Sunday doing this: 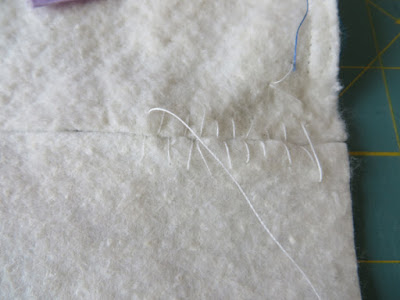 I also added to the backside fabric, and did something to the front to extend what I had. Some more quilting, including this pleasant surprise: 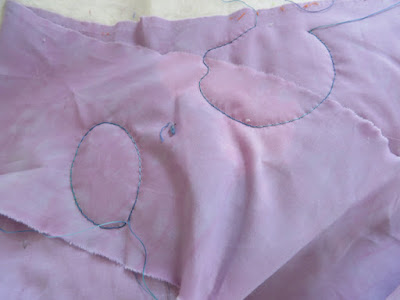 Only last week I had written to a friend - in connection with telling her a bit about my involvement with the refugees - that I wanted some more of my own life back for me. So in a way I really enjoyed the fact that I was spending almost the complete day in my studio, virtually no phone calls concerning the topic refugees. But it would have felt slightly better had I been really working creatively instead of fixing yet another of my size-matters-catastrophes. Is it a sign from the heavens that I should not even try to make something to a predetermined size? Or is it an attitude problem on my side why I keep running into these issues?
In any case, I am very happy that there are still a few days left before the deadline. Although by now I really am finishing up the facing, and could even end up on the other end of the allowed spectrum, i.e. 5% larger/longer than the allowed 130 cm... The pendulum swing of life? 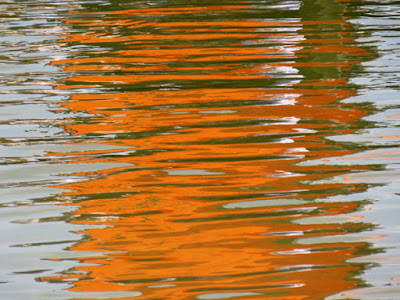 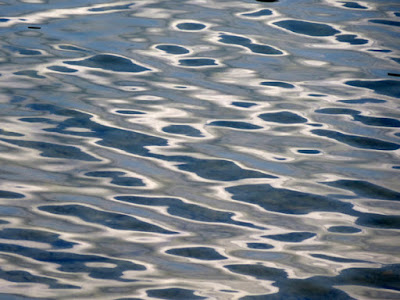 Monday and Tuesday I was busy being schooled by Patricia of Handquilter, who had come from Göttingen to get me started on my longarm. She checked out whether we had set up  the table correctly, how the machine was rolling on the rails, suggested a different height of the frame - and then took a look at the machine itself. Because I had been complaining to her directly that it was leaving out stitches during the days before.
But she quickly found what she thought might have been the reason, namely a not quite correctly adjusted presser foot. We checked the youtube-video that tells you how to adjust that, followed it step by step, and after that it was only with really strange threads or incorrectly adjusted thread tension that the machine mucked up.
I hope for the best.

Now it will be a couple of weeks of practising before I dare take a real quilt onto the frame. But I am looking forward to it. And there are several pieces waiting in line, so I will be busy.
As I have also been busy with the refugees. It will now be a learning process not only of working the machine, but finding the good balance between my involvement with the refugees' issues and finding time for this new aspect in my quilting life.

Waiting for my longarm coach

Tomorrow I will be visited by a coach for my longarm machine, and I am really looking forward to that. So far some things have been working ok, some less so, and the time spent at the machine trying to get acquainted with it has not always been a happy one. I hope this will change dramatically after the one-and-a-half-day session tomorrow and the day after.
Until then, I have been biding time.
A considerate friend called me to tell me that the deadling for Ste. Marie-aus-Mines has been extended by one week. Which made me happy. Still working on reflections in the textile realm. 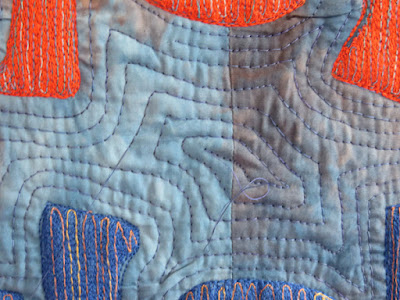 But not only there - last Tuesday we took a trip to Munich to a lawyer with three of the refugees, one of whom has already received a notification that he might be deported to Hungary due to Dublin-III-regulation. The other two will have their hearing at the end of the month. (I have learned so much about asylum politics in the last few weeks - and mostly it gives me the sad feeling that this is a strange and inhumane business that is taking place. In the 19th and early 20th century all the people who left (mostly) Europe and went to the US or Canada or Australia were simply called 'emigrants', and given a chance in their chosen country. Nobody asked them whether they were 'political' or 'economic' refugees. I wonder why that has changed. People have always been moving from one country to the other for all different kinds of reasons. Why does it have to be so difficult and dangerous nowadays? Why do some people not offer a decent amount of hospitality to newcomers? I could go on about this for a long time... but end of side remark.) After the lawyer, we continued our trip for an afternoon on the lake with a bit of swimming and boating - and many more reflections for the camera. 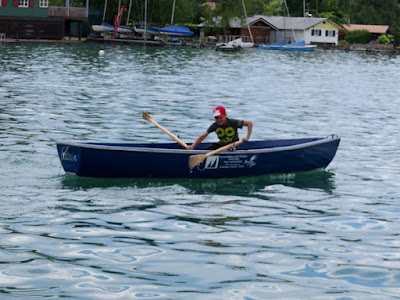 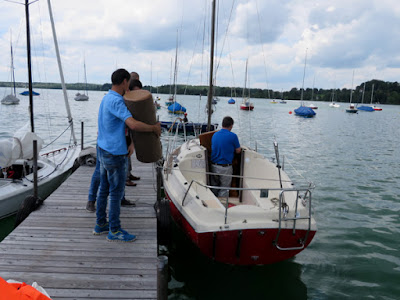 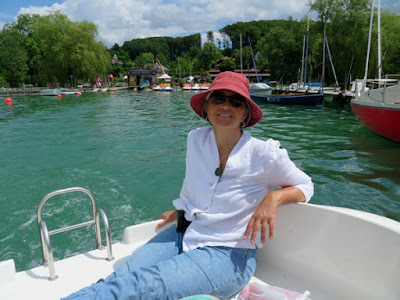 The reflections were many - and my son is starting to get annoyed with his mother always taking pictures of the water. 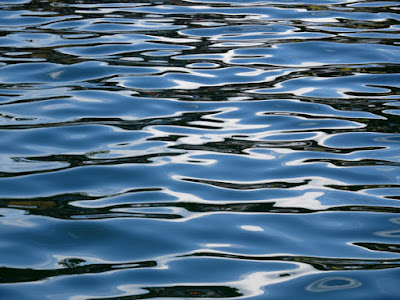 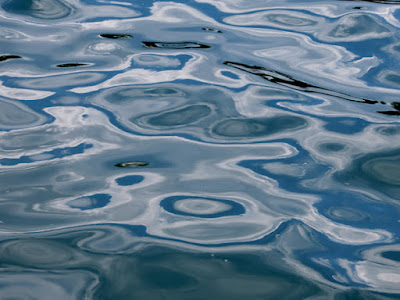 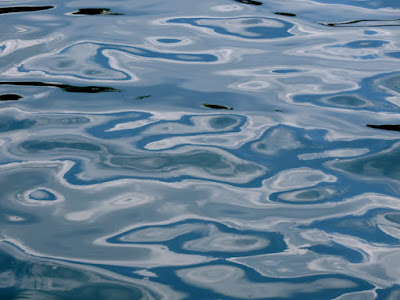 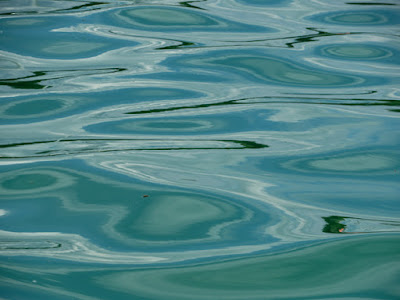 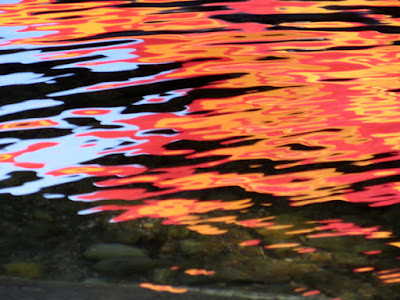 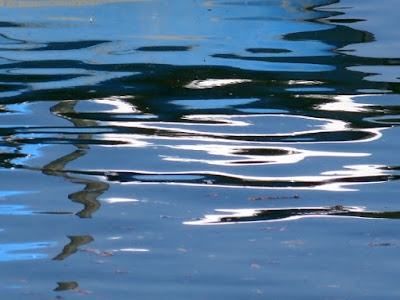