Yesterday was the last day of the school year, and the class of refugees where I have been teaching German this past year received their documentation that they completed the course. It's not really a diploma or report card, but a piece of paper that shows what they did with themselves this past year. We still don't know whether the Senegalese amongst them will be allowed to start the apprenticeship/education that all of this was a preparation for, but our little celebration on Friday was nice and cheerful. Except for the moments when I started to cry during the little speech I had prepared.


I had practised the paragraph which I thought would be the most likely one to make me cry several times, and I got through that one alright. But another one a bit later, which I had not read out loud so often then caught me... But I guess that's ok after all that emotional upheaval throughout the year. The good news for me was that there will be another class starting in September, so I will be teaching again. It just hasn't really hit home yet, I find it hard to rejoice on my good luck when I don't know for the students of this year. But neither of them had understood when I said I might not agree to teach again next year if they did not get their permit, they all said I should teach and not bother about them.

This morning I have dropped of my son at his first basketball camp during this vacation, and then continued to a small apartment south of Bamberg where I will relax and bide my time before I pick him up again on Thursday. No sewing with me, only a book, a bit of knitting and Spanish vocabulary, and my bike. I plan to sleep a lot, bike a lot, read, relax...

We have just over a week left in the school year. The Senegalese students still haven't heard from the authorities whether they will be allowed a work permit or denied. But for next week they are being asked to get all their papers ready for inspection, a health check, an informational meetings - and they are asking themselves what this is all about. By now all of them have lost hope that something good will come from this, and their mood is low. So is mine.
We started with such a vibrant enthusiasm, we had so many good hours and lots of fun, they have learned so much. And now they are being let down. It is unbearable, and I am very very frustrated.
That is the one patch of frustration. The other one is that I still don't know whether the job will continue next year because although now the district has voted for a continuation, it took them so long that several of the people who had signed up for next year's class have meanwhile decided to take other options, have withdrawn their application, and right now we don't have enough people signed up to get a full class size at which the program would indeed continue.

To be prepared for everything I have ordered a new computer because the one I am using right now belongs to the school and I might have to turn it in pretty soon. I picked it up today and will spend the next days transferring everything to the new hard drive and getting used to another technical item.

So only minor things have been going on at the sewing machine. I did finish sewing the top that I started a little while ago, counting. And I used my longarm to baste it, as I won't be quilting it on the longarm. 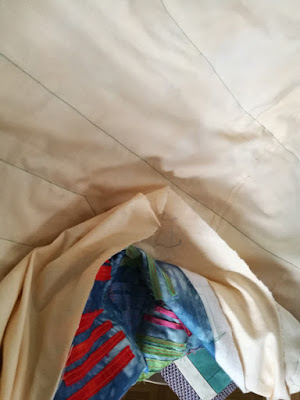 I decided to enter this quilt for the European Quilt Triannual, so I won't be showing more pictures of it on the blog prior to deadline and decision.


Tomorrow is the day when a decision will be made whether after September 1 I will still be working in the job I have right now, or not. The district parliament will take their vote on whether they want to continue funding the project that was originally scheduled for a 3-year-period. However, the  responsible teacher for the class has told me she has found out that the principal of the school is not exactly what you would call a supportive part in the whole affair, in fact she is scheming against it. So I am not expecting a positive outcome for me.
That means I will most likely find myself without a job pretty soon. Which is rather disenchanting. Despite the fact that it has been an emotionally very challenging year, much more so than I had anticipated, it has also been a wonderfully enriching and rewarding year in terms of the relationships and interactions with my students. I have enjoyed having a paid job, even if it was for only 10 hours a week, that has given me the feeling that I am actually contributing something to the family income beyond a mere work-force in household matters - which is not something I was made for, but which has really been my position in the family over the last years. The fabric business does not fulfill that 'paying' function, and making quilts is not something one can live on in Germany. So the future is rather open right now.
In a way I can appreciate the thought that it would be nice to have those hours ‘back’ for me and textile work, and, an important point, to have less emotional involvement with refugee matters that are being treated completely differently on the political side than I would like them to be treated. I can’t change German politics on my own, even though I don’t agree with it, and especially Bavarian politics. And it is costing me too much emotional and physical strength trying to do so nevertheless. I am a tired helper. On the other hand I cannot willingly withdraw from the lives of these nice people I have met and made friends with. And as a third aspect, I do want to have a job outside the house. So I have started searching. We’ll see what happens.
I am also spending quite a bit of time in the garden, as one of the students has offered to help me with digging and weeding, and what used to be an unmanageable mess has by now transformed into a well-kept area.

A couple of weeks ago I was asked to become a member of another international quilt group, 12 by theD ozen, and after a few days of pondering the matter, I have decided to say yes. It is a bit of a downer that the first challenge I need to deliver for (and rather quickly) is ‘inspired by Gustav Klimt’. He is certainly not my favorite artist, in fact, I find him rather uninspiring. But I have decided to join the group nevertheless, get Klimt done and over with and then see what happens. I have even found a picture of one of his drawings in one art book that I have here at home, so did not have to search the internet or go to the library. Now I need to get to work on that quickly, as ‘reveal date’ is on August 31. And I will be gone a bit before then.
Yesterday I have committed to participating in another challenge, of the local chapter of the German Patchwork Guild, on the topic of “at home” (in Bavarian dialect). I know what I want to do - although I will skip the local Bavarian dialect aspect - and need to get going on that. And then there are other things in the background. Busy enough to not spend too much time thinking about the future of my job. However, the future of the refugees whom I met through this job is constantly on my mind.
Posted by Uta Lenk at Sunday, July 09, 2017 2 comments:

Demonstration, and started a new quilt

Last week Saturday I went on a real demonstration for the first time in my life. It was a demonstration against Germany's current practice of deportations to Afghanistan, and for the right of refugees here to get an education, and a title to stay at least for the duration of that education. It was hot, it was long, and it was interesting. 3500 people were there, they say. The demonstration was organized by a cooperation of refugee representations and over helper circles. It was amazing to see so many people actually expressing a similar opinion as I have. Too frequently it feels like not enough people think like I do. 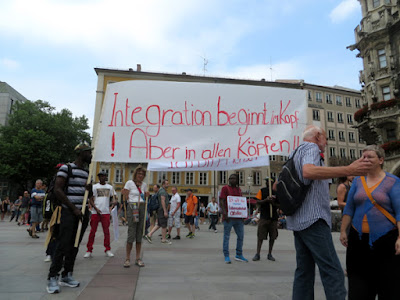 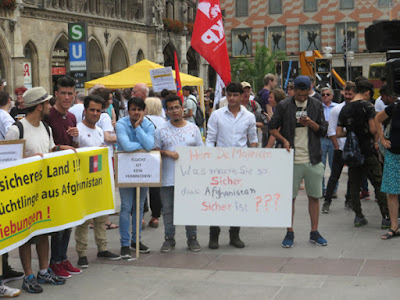 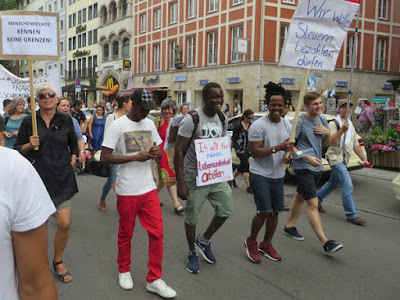 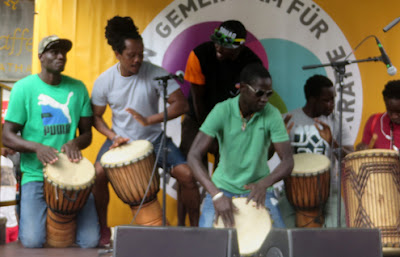 However, the media have not reported about this. It is frustrating - how can they ignore a demonstration like this?

I started a new quilt recently, too. Still in line with this topic, that seems to be taking over my life again. It is a bit of  'compulsive sewing', as Kathleen Loomis likes to call it. Or another kind of meditation. 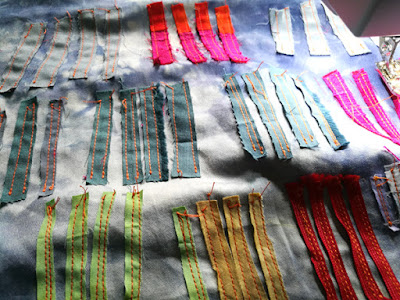 It will be another in the series "text messages". Because it does not always take letters to make a text (here is the linguist from earlier times leaking a bit of her knowledge.) But it's still far from done.
Posted by Uta Lenk at Saturday, July 01, 2017 1 comment: