Finishing up and starting new

While on the island I had brought lots of stuff to keep myself busy.
Of course we went for walks and watched seals and birds. Besides the photos that I have already posted, I could present many more. So one each for birds and seals only.

We collected tons of sea glass. The weight of which in total we only realized when we were packing our bags...


But you can't do that all day, and when an island is only ca. 3 km on its outskirts you appreciate to have something else to do besides walking.
Never once touched the vocabulary cards for Spanish. But did some spinning, more knitting, and a bit of hand stitching.
During the week I finished one pair of socks that had been started before my departure, and the jacket from handspun yarn that I had started to knit in March. I had brought my spinning wheel, did some spinning on a new project, and also spun a few fibers from the sheep that are about on the island, which we had collected from the fences. 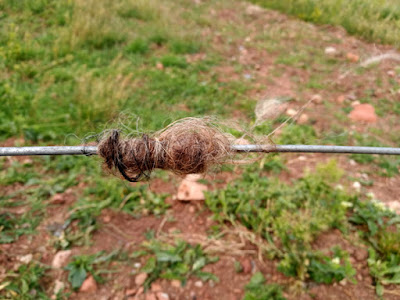 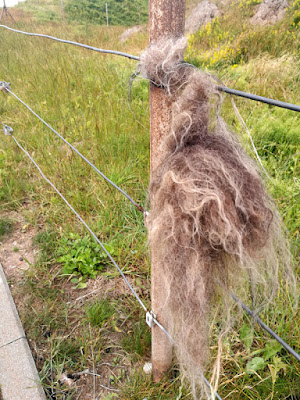 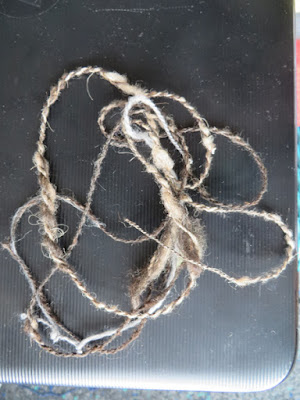 And on the train ride back home I managed to finish another vest I had been knitting for much longer, also from handspun yarn, and yet another pair of socks. 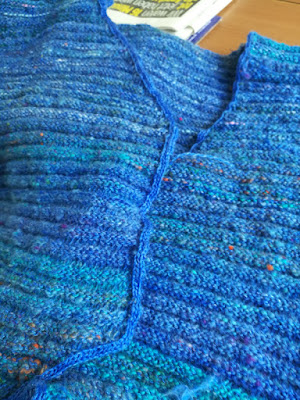 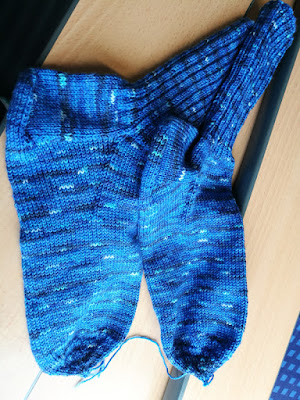 At the same time I started stitching on a scrappy project of Paper Piecing, continued on the A Scrap a Day. It was a time of finishing up, and getting oriented towards something new. A bit like in real life, because in the fall quite a few things are going to change for me, and for my family. And probably for my art, but of course I do hope that that won't disappear entirely despite the fact that my time allowance will be much more limited then.
Posted by Uta Lenk at Wednesday, June 27, 2018 No comments:

Email ThisBlogThis!Share to TwitterShare to FacebookShare to Pinterest
Labels: a scrap a day, addiction, Daily Art Project, finishing, getting started on something new, Knitting, spinning, vacation

Thoughts on a storm bound island

So it was World Refugee Day a few days ago.

An unprecedented total of 68,5 million people are ‘registered refugees’. That is more than the total population of Great Britain.

Or almost twice the population of California, or Canada. Or the population of the area that used to be “West Germany” only a little more than 25 years ago.
If we take into consideration that almost the entire population of the United States is descended from migrants (except that they were called ‘immigrants’ back then), and the fact that migration has been a common habit in human history, that shaped the world (otherwise we would still all be in Africa), it is not understandable that we are reacting to people on the move today in the way that we have been recently. Only a very limited part of the (im)migrants that came to the US came for political or religious reasons, the causes that nowadays make a ‘good’ refugee, eligible for political asylum. They were virtually all of them on the search for a better life due to the economic circumstances back home.
Germany believes it has a ‘homogenous’ population. Not true. A fifth of the population has a ‘migratory background’. Not to mention the fact that even in historic times quite a bit of movement went on between the tribes of Europe...  My grandfather fled from Eastern Germany by swimming through a river to get across the border, and my grandmother and two of her daughters were allowed to follow after a few months later in what was called ‘family reunification’ back then, and what many German politicians do not want to allow for refugees with a certain kind of refugee status. Of course, he was labelled a ‘good’, i.e. political refugee because he was fleeing from political oppression by the bad communists. And it was the Fifties. And he was a German fleeing to Germany.
But that doesn’t really make it a different situation to young Afghans today, who come to Germany in search of a safe life without Taliban interference, and who would like to have their families join them in their new place. But because the German government has decided that Afghanistan is a ‘safe’ country (ignoring the fact that people get blown up in the street all the time, how safe an environment is that…?) and they should not be fleeing that country to begin with, we won’t let them have their family with them.
How come we are making a difference in refugee status anyway, why do we have to differenciate between a political refugee and an economic refugee? Yes, a war is a terrible reason for having to leave home, nobody should have to endure that. But economic reasons are equally terrible, not any less valid, and certainly ‘political refugees’ aren’t a better kind of refugees than ‘economic refugees’. Which is the current state of politics in European countries. Because we have to face it: both, the wars and the economic conditions that people are fleeing from, were heavily influenced or created by Western politics and economic dealings. The affluent societies are responsible for the chaos that is characterizing the world situation today. And we cannot refuse to take that responsibility by building walls to keep people out of our countries, or by not allowing boats which have taken refugees on board in the Mediterranean entry to a safe port.

World Refugee Day. When are the affluent societies going to understand that we need to make every day a World Responsibility Day? That we have to create living conditions around the world so that nobody would want to leave their country? It is our economic and political system that has caused all this trouble. We are exporting weapons, and then we are surprised that these weapons are used for wars, and that people who live in areas where wars are happening don’t want to stay there. We are exploiting and changing agricultural systems for our economic benefit and then we are surprised that people starve because their harvests are failing. We are supporting corrupt political leaders who will eagerly allow our economic systems to obtain cheap resources (and divert a good amount of the profits into their own pocket) and then we are surprised that young people who are fed up with being deprived of chances in their own countries are taking to the road, the rubber boat, and want their share of livelihood in our countries.
As I am spending these few days on a remote island, currently storm bound and uncertain whether the ferries will resume service by tomorrow when we are scheduled to leave these thoughts keep circulating in my head. 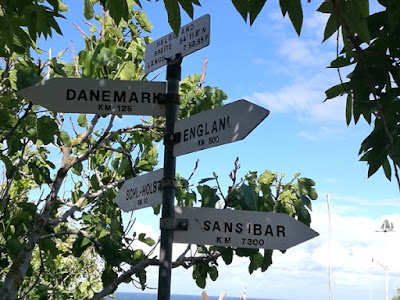 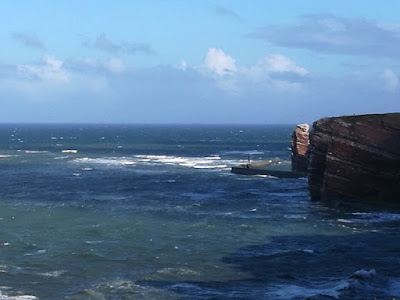 The past few years and my involvement with refugees have shown and taught me so much that has enriched my life in terms of friendships, understanding, intensity of living. But German politicians are squabbling about these issues of refugee-crisis-management in a manner that one wonders regarding their sanity of mind. The treatment of migrant families on the US-Mexican border, and the continuing demands for construction of a wall by the American administration is appalling. We have only one world to live in. And there are many other people besides us, the rich ones. Their rights are equal to ours, that is something we have declared, and there was a time when we were proud to have arrived at such a declaration. We must finally begin to fill it with life. Every Day is World Responsibility Day.
Posted by Uta Lenk at Saturday, June 23, 2018 3 comments:

Vacation on an Island

I love islands. The feeling of being close to the sea everywhere, the air, the wind, the smell… I even think I would like to live on an island - perhaps that is why I am so much attracted by New Zealand? In any case, it is always good for me to be on an island, and right now I am spending a week on Heligoland with a friend of mine. 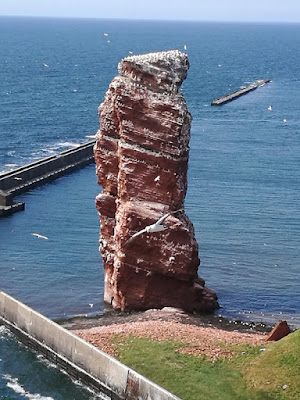 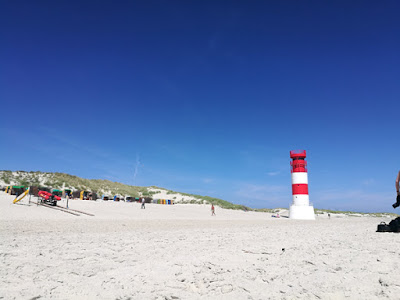 Helgoland is Germany’s only island in the High Sea, all others are so close to the shore that they don’t qualify for that.


So there is quite a bit of Duty Free Shopping, even lots, which also attracts Day tourists - they are the only drawback to being here. But we are finding our way around them.
We have developed rituals very quickly, and we are having a wonderful time. I go for a morning run almost every morning (skipped today because of the weather, though) - around the island counter clock-wise once, and clock-wise to get back, then I stop at the bakery.
At low tide, we go beach combing, and we have become expert sea-glass-spotters.

We are amazed at how different the harvest is on different beaches. And there is lots of glass around. Makes you think more about the micro-plastic problem so much being talked about, too, but we are on vacation.
We have gone swimming (water temperature: 15 degrees centigrade). 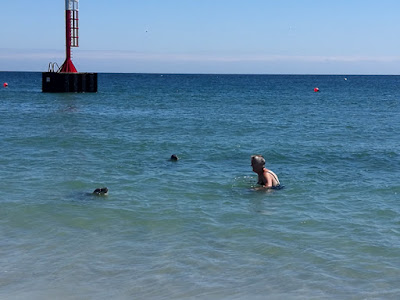 And we drink lots of tea and knit. I just finished a white jacket that I made in brioche stitch, from handspun yarn, and I had only started it in March, so that was a quick finish. 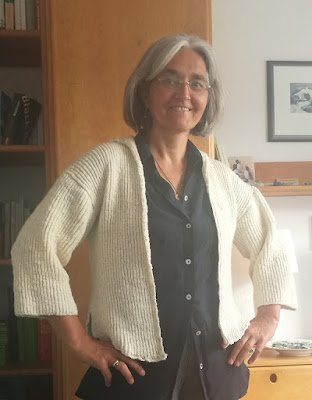 Today is much cooler, too, so this comes in very handy.
Posted by Uta Lenk at Thursday, June 21, 2018 No comments:

At the beginning of the week I spied on Instagram the hastag for the FoQ-Warmup-Challenge. Immediately I wanted to participate, but it took me a few days to get going. Only on the fifth day did I join in, and posted all of the prompts at once. That is probably not the proper way to do it, but #betterlatethannever, I thought.
In any case I wanted to present my selection here as well.

There are always many works in progress, so this one was hard to choose. I decided on the A Scrap a Day Project, ongoing, with progress in leaps and bounds... 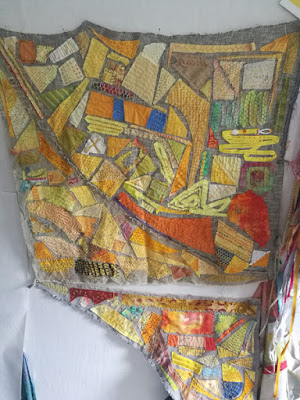 This one wasn't hard at all in terms of deciding. But hard in that I don't have a picture of this quilt except for a photo from the flyer of the museum where I saw this quilt in 2006. I don't think any other quilt has moved me as deeply as this one (although one by Roberty LePoidevin came pretty close!). This is a quilt that was made by former slaves just after the American Civil War, and I was lucky to see it in an exhibition in the Raleigh Museum. 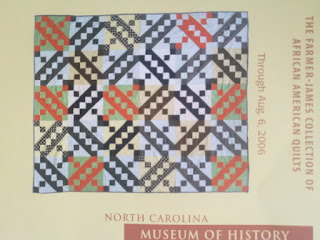 Is another work in progress, that I have posted about before and that is nearing completion, although there is still some work that needs to be done: my UDHR-quilt that I was working on during the textile art symposium in May. 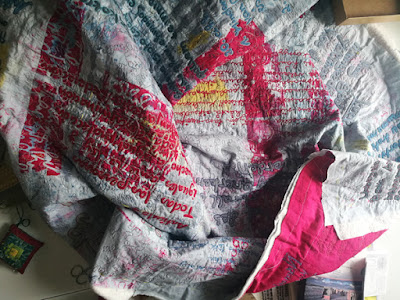 Although I did not play by the rules and only posted my pictures on the last day, I do like challenges like this. It's fun to pick out pieces like and present them for others to see.
Posted by Uta Lenk at Saturday, June 09, 2018 No comments: