Preparing for after? (Is it still a diary of recovery?)

For more than 15 years I have been teaching patchwork workshops at a Rural Catholic Community College which provides us with perfect conditions. Recently a few things changed, however. The employee who was ‘in charge’ of us went into retirement and the successor has not been appointed yet, partly due to Corona, partly due to inner workings I am not familiar with. We were given an intermediate person who is in charge and yesterday I went to Petersberg. First incentive was to get a massage with the wonderful massage therapist who is located there, and second incentive was to talk to that person, who also happens to be the director of it all.

Before we talked I went for a little walk in the woods around the house. Fall is my absolute favorite time of year there, as the beech trees turn yellow and the woods suddenly seem so much lighter and gayer than on a normal summer day. Which in itself is nice, too, but if you look at these pictures I am sure you will understand. 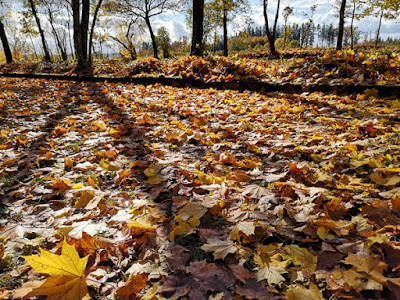 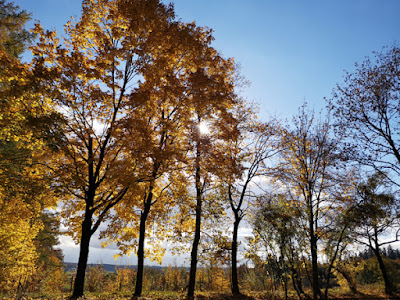 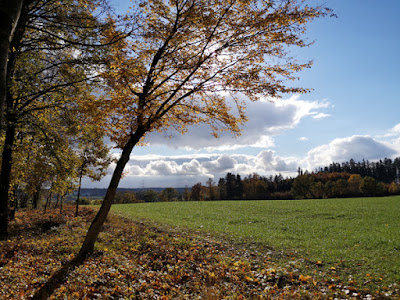 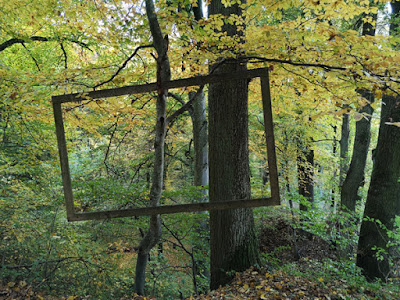 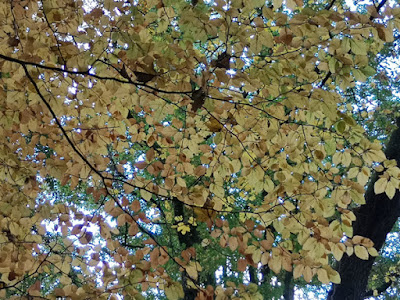 The conversation was positive enough – for the coming year two dates have already been set, and he promised to give us two suggestions within the next few days for 2022. No promises made as to how things will continue when a new employee will actually be installed, but he acknowledged that the patchwork workshops are a bench to build on: they are the workshops that fill up the quickest, they are easy to organize for the people in the house and no additional personnel is needed from their side to run the show. So it all sounded positive. And with those trees shining with light it felt like things were improving. Silver Lining!

But of course I knew that the storm was brewing, I have been following the news, the rising numbers of infections, the ‘hot spots of infection’, the scary information that nobody is able to follow anymore where people are actually getting their infections. My brother-in-law and his wife have had it, and they have no idea where they might have caught it. And I do consider them pretty conscientious people who will abide by the rules. They did not go to illegal parties for sure – some of those have been decisive in the rise of numbers in our area.

Today the prime ministers of the federal states convened with the chancellor, and they have pronounced another four week lockdown. They are not calling it that. But in fact that is what it is. Lots of places closed down, they are insisting that people stay home as much as possible, no mingling, ‘reduce your contacts’. I am just starting three weeks of vacation. Not much to look forward to, really. Can’t go visit friends or take trips, not even day trips... I guess just taking it day by day is the only thing to do. Keep stitching to stay sane, keep moving for as much exercise as we are allowed – we have not been told to stay at home, just to minimize contact with other people – and not make the mistake to start cooking elaborate meals and trying out recipes that then need to be eaten. And start on the next round of listening to my Pale Rider.

The Quilt that sewed itself (Diary of recovery)

One of the first real-life impressions I had of Kathleen Loomis was when we were both attending a Master Class at Nancy Crow’s barn in Ohio and Kathy was showing one of her mind-boggling postage stamp quilts to some people in the room. I don’t remember whether it was “Spaghetti Sauce” or  “The Great Lawn” but I certainly remember what I thought when I saw her unrolling the meticulously packaged quilt of a zillion (or so it seemed) small pieces held together by thread lines: it was a mixture of sincere awe and asking myself whether she was out of her mind. (I like people who are slightly off the beaten track!)

Meanwhile Kathy and I have become good friends, and even before I met her I did what she had done that eventually started her off on the postage stamp quilts: I used small pieces of fabric as sewing-on-sewing-off pieces to stabilize thread tension in between seams on a current project. But for a while I was getting to the point where they were accumulating and I did not know what to do with them, really. I used some on small quilts: 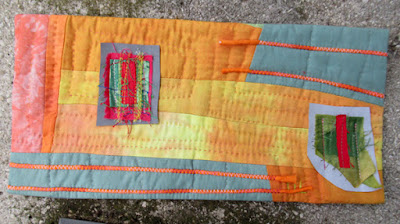 I used some on a T-shirt I had to mend at the side seam. I had cut out the washing instructions label and cut into the jersey fabric and did not want to throw away the new shirt, so I simply sewed two of the pieces on the side seam, a little later I also added some more on the edge of the neckline. And I have put some on certain spots of jeans that needed mending. 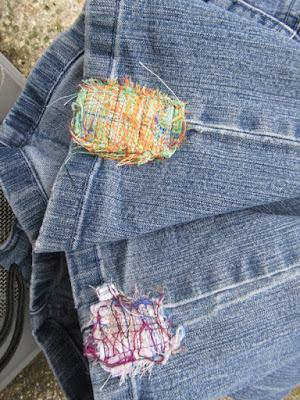 But overall I was at a loss – no way could I start making larger pieces similar to Kathy’s, it is so much her style that I would never have made a piece out of any number of these. On the other hand, having them at the sewing machine throat was just so handy, because it was so much easier to start and finish off a seam when using them. So when I saw a post on Instagram by Maryline Collioud-Robert / @mary_and_patch where she showed a ‘quilt that had sewed itself’ and checked up on the respective blog entry and realized that she was basically doing that same thing with scraps that she then put together into a scrap quilt, I knew that this phrase filled a need of mine.

But I took a slightly different approach. Last year I had started yet another piece with which I was going to commemorate more refugees who drowned in the Mediterranean – but with my increasing frustration about the whole situation I was growing more desperate, and at some point that quilt stalled. What use counting dead refugees by creating blue four-patch blocks…? The precuts and pieces that had been sewn already were left sitting there in a basket, another one amongst my too many unfinished pieces. And I had seen another post on Instagram, by DianaVandeyar /@dianavandeyar, whom I had met in South Africa last year. She was revisiting her many years of digital pattern designs and it included a design with four-patch blocks that set me on a track of thinking about what I could do with those blue four-patches.

Here is where it all comes together, just in case you are wondering: I needed something to sew on and sew off, I wanted to do something with the four-patches and I liked the phrase ‘a quilt that sewed itself’. So while I was working on my lockdown-pieces, I also worked on the blue four-patches, finishing them, putting them into double-four-patches, and the whole thing grew into a large blanket. 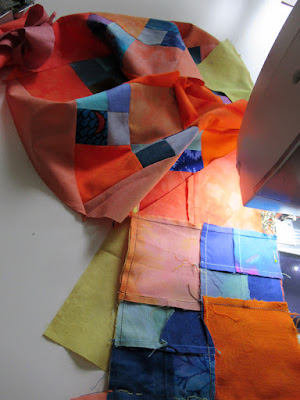 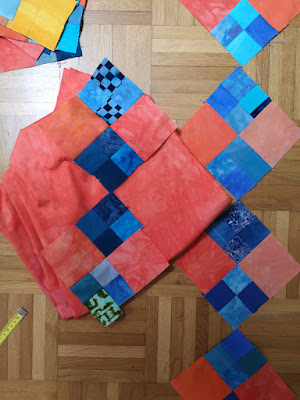 The process took off at a point where a number of four-patches had been finished, but it also included sewing a few last strips together, cut-offs into four-patches, and then four-patches into double four-patches with the oranges, and then double-doubles. So there were a few phases where a bit of planning ahead and preparing was needed, but I kept the planning to a minimum in order to be able to concentrate on the main quilt(s) for which this one was only the sew-on-sew-off .

Here are photos of the back in the making. I had so many double-four-patches left over once I decided I was going to eliminate the ones with yellow and stick to only basically orange for the front. Yet I did not want any leftover blocks, and I did not want to have to come up with another idea for them. So the yellow ones ended up on the back. 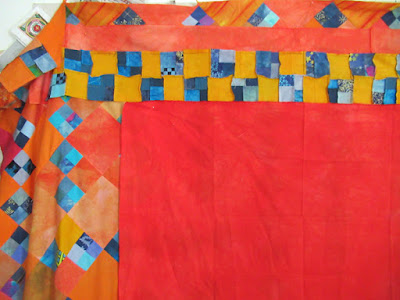 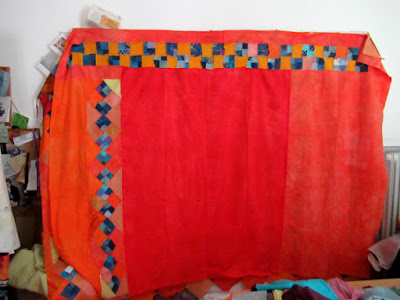 It has been quilted, and I do like how it turned out. Not sure yet whether it will also be entered somewhere but we will see. Now I need to get the binding on. And I have already started on my next quilt that sews itself as I sew on and off. This one is going to be a lot more scrappy, meaning there will at least for a while be even less planning needed.

Thank you, Kathy, Marie and Diana – so much fun when inspiration is fed from different sources and it all comes together somehow!

A little more than a week ago I got to teach a workshop at the Community College where I have been teaching regularly. Until the last day I was expecting to receive a cancellation due to rising infection numbers, but that didn’t happen. 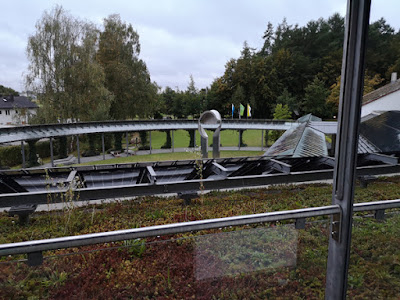 We got together, no hugging as usual, the tables stood a bit further apart than usually. But we always have pretty big tables, one of the many many assets this venue provides, and so the situation in the sewing room wasn’t that much different than any other time. Except for wearing masks when going around in the room, I did not go as close up to participants as I might have in other times. And we were supposed to wear masks when leaving the room, of course. Nothing we were not prepared for, because by now everybody knows how to behave. And we were all so very happy that the workshop could take place that everybody obliged willingly. In Germany by now many people are debating more and more whether wearing masks does actually make a difference in terms of infection rates. I wonder why – is it because we were so successful in the spring to cut it all down that now, because it all was so successful people are not taking the danger for real anymore? By now, numbers are rising again, and it is getting to the point where the increase is dramatic. 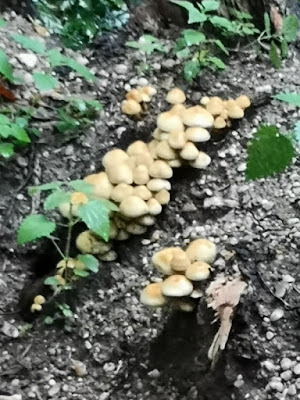 However, I did feel a difference, both in the teaching, and in the dining room situation. Meal times were split up, to reduce the number of people in the room together at one time. And we were supposed to sit with social distance, although not quite 6 ft. apart. Normally, there would have been a gorgeous salad buffet, one of the highlights of that place – not possible. Meals weren’t served to the table, one had to stand in line, then got to pick out what one wanted and could take the plate back to the table. Food was as good as always, but I clearly felt how important those meals together, the conversations that take place at the table during eating, are for the overall well-being of the course. We were still fine, the group knows each other, and we all had a very good time. 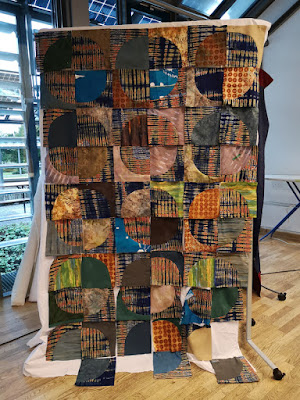 Under the circumstances it was probably much better than we could have hoped for. And I am very grateful that we could do that weekend. It is just a tiny bit of feeling of completeness that was missing.