Just a few more impressions from Ste. Marie-aux-Mines in . 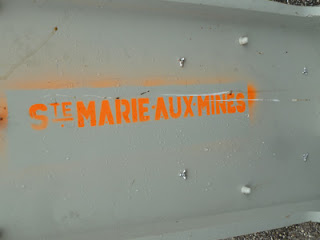 Here is an installation with lots of Aurifil thread spools at the entry to the Espace Commercial, which I found interesting. What an idea! 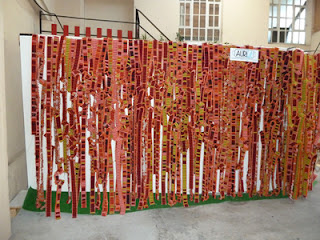 Besides the Canadian exhibition «Tradition in Transition» I got to see the results of the contest, of course.

However, because all the quilts are pictured in the catalogue, I did not take any photos besides the one of the winner of ‘best of show’, “Remembering” by Linda Kemshall.

I also got to see Kumiko Frydl’s stunning show of little pieces, “Perfect piecing”, which left me full of admiration and awe. Kumiko’s quilts are usually not any larger than 40cm/16 inch on each side, yet display the full richness in details as would befit a fully sized King Size quilt. Absolutely fascinating.

Kumiko has published a book on her technique (in French), which, unfortunately was sold out by the time I got to see her exhibition.

I also went to the Place des Tisserands for a stop at SAQA's Wide Horizons III and at Libby Lehman’s exhibition. In Libby’s show I found it highly interesting to see the development she has made – there are thirty years between “Red Sky in the Morning” (1982) and “Ribbonplay” (2011).


My favorite in Wide Horizons was Margaret Ramsay’s “Weymouth Waves”.

That’s a degree of ‘pictorial quilt’ that I can really connect to. This time the Wide Horizons is supposed to travel through for the next year. It will be shown in Vicanza in October, and SAQA and Carrefour are still working on finding additional venues. If you get a chance to see it, you should definitely take it!

This is the last report of what quilts I got to see in Ste. Marie-aux-Mines. As I wanted to be present at my own exhibition as much as possible I did not venture into the other villages more than once – and ended before a church closed for mass.
Being there with an exhibition keeps one busy enough that seeing other people’s exhibitions is not on the top priority position for those days. But it was a wonderful and rewarding experience. Thank you very much to Gul LaPorte, who invited me in the first place, and to Sylvie Leroux for her professional management of the artists’s concerns and needs, and to Dinah for her kindness and expertise in managing the contest and the jury!
Posted by Uta Lenk at Sunday, September 30, 2012 1 comment:

With my exhibition at Ste. Marie-aux-Mines so much at the forefront of my mind I have totally neglected to point out the beginning of the SAQA Benefit Auction, which has already been on for almost two weeks. But it is not too late to bid. One more week of reverse auction is starting tomorrow.

You can find a description of how it all works here. And the auction bidding form here.

And you can find my donated piece and many other pieces here.

But of course I hope you will bid early on, to help raise good money for SAQA. And please don’t bid only on mine – there are several other very beautiful pieces on page 3b! (I think I have been lucky to be placed in such good company.)
Please support SAQA and tell everyone how wonderul art quilts are!
Posted by Uta Lenk at Sunday, September 23, 2012 No comments:

"Tradition in Transition" – the Canadian Exhibition at Ste. Marie-aux-Mines (report no. 3)

As I was mostly bound up with my own personal exhibition in the Eglise St. Louis I did not have a whole lot of time to go around and see other exhibitions. But I did get a chance to run over to the Eglise de la Madeleine where the invited countries usually have their venue. Two years ago it was the German Guild, and I was represented in that show with two of my quilts. This year it was , with a beautiful and impressing show curated by Sandra Reford. (Read her blog here and find her homepage here.)

The theme of the exhibition was “Tradition in Transition”. It was meant to show the diversity of Canadian quilt making these days, oscillating between traditional patterns and methods and modern approaches and designs. All of this with a number of quilters from across the entire country, from to the West Coast. 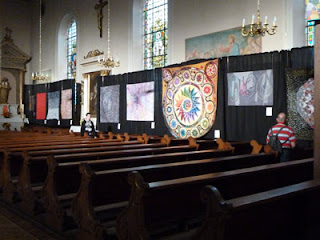 Unfortunately, this church really suffered from relatively poor lighting, and photos did not turn out very well.
The show included no. 3 of Jayne Willoughby Scott’s  wonderful “Night Drawings”.

JudithMartin’s work “Energy Cloth” is covered with a lot of embroidery stitches that add another layer of texture to the piece overall, and have a definite effect on the coloring of the wholecloth batik.

On the edge between traditional and modern is Kate Busby’s “3600 (Beats)” (on the right of the picture). Next to that is “Aglow” by Anna Hergert. 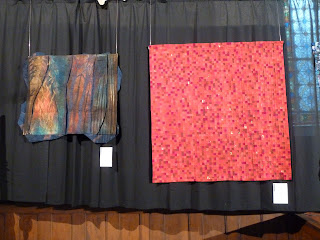 More on the traditional side, but still with a rather unusual slight twist is “Nine Patch Minuet” by Penelope Player. Sandra Reford told me that Penelope is a third generation quilter, without a website. I love such a modern interpretation of traditional patterns.

What I liked most in the entire exhibition, though, were two pieces that weren’t quilts at all. Sandra Reford told me that she chose both of these artists because they use quilting techniques in other dimensions of textile art. One of them is Chung-Im Kim’s  three-dimensional felt sculpture “Dawn”, which you need to look at from many different directions in order to fully appreciate its entire beauty.

The other one is “Accumulate” by Amanda McCavour. This piece in particular suffered greatly from the poor lighting in the church, and really should have been hung freely from the ceiling instead against a wall.

Sandra Reford had told me that she did not really go for pictorial quilts and that, of course, her selection was a very personal one. But it was an exhibition very much to my liking - lots of piecing, a good mixture of traditional and modern interpretations. I was very glad to have chosen and seen it.
Posted by Uta Lenk at Friday, September 21, 2012 4 comments:

After I had been busy Wednesday morning hanging my show, I was pleased with the final result and the appearance of „my“ side of the church. 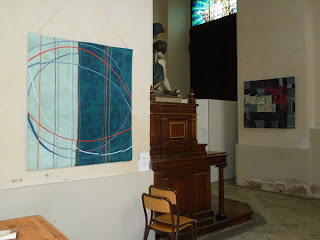 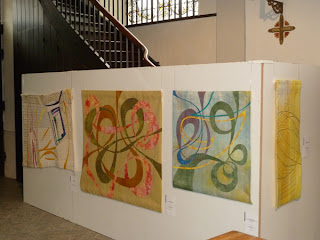 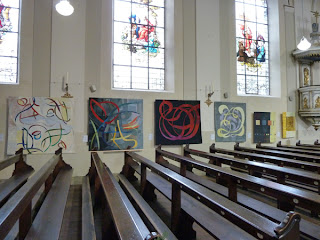 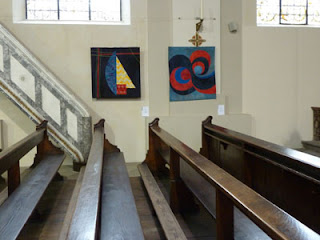 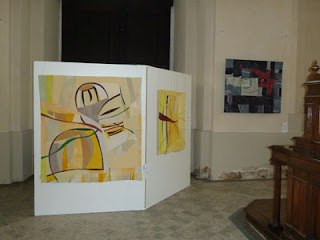 The other side was occcupied by Regula Affolter from and her „Interpretations of human bodies and blue brains“, an interesting series on brain patterns, head shapes and other radiological phenomena. 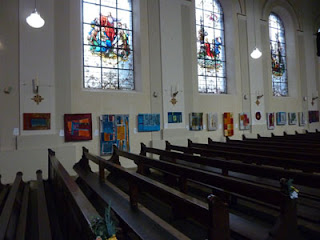 In the afternoon my next round in jury-commitments called: we still had to determine the first prize winner of the contest „Yesterday, Today, Tomorrow“. Together with president of the jury Libby Lehman and Linda Colsh I got to see the entire exhibition of the chosen pieces in advance at the Chapelle Saint Joseph. We quickly agreed that the quilt which had received the single highest number of points in the individual rounds of judging was actually worthy of receiving „Best of Show“.

I slept very badly in the night before Thursday – too excited...
People were already standing in front of the gates of the Espace commerciale when I was heading towards the church just after nine o’clock, and the first visitors entered the church at ten past nine – official opening time of the exhibit was 9:30! 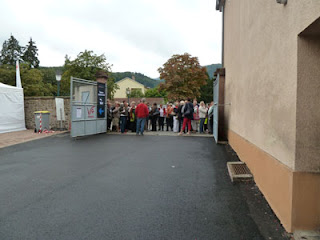 After that the entire day was a constant stream of visitors. 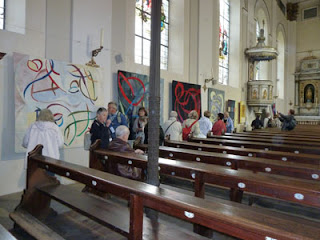 Friday was very busy as well, but slighly fewer visitors on Saturday and even less on Sunday.
I can’t say how often I had to verify that my lines are not appliquéd, and that yes, these lines can be sewn, and with a machine. It seems this was just very hard to believe for most people who were there. And several thousand pictures were taken, I can’t even guess how many they actually were.
It was wonderful to hear so much praise and receive so much admiration for what I had worked on for so long. And I was particularly pleased to meet Lucia Stacchetti of the „Quilt Triennale“, Cathy Izzo and Dale Riehl of the Art Quilt Gallery in New York City, and last but not least the American Art Quilt Collector Jack Walsh, all of whom took the time to stop by and take a look at my exhibition. 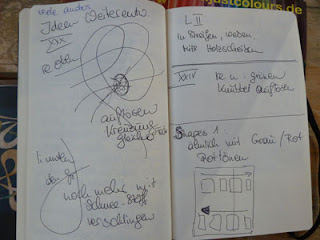 Or parts of them could even be combined to form an entirely new set of lines.

So I returned home with several ideas already churning in my head. It’s just a problem of increasing the number of hours per day so I can get everything finished, given all the other things that have been put off for so long and are now waiting to be taken care of.
Posted by Uta Lenk at Tuesday, September 18, 2012 2 comments:

After all these weeks of preparations and the diverse moments of panic inbetween the actual departure for Ste. Marie-aux-Mines last Wednesday was surprisingly uneventful. The car was packed quickly, and I could have fit in even a few more quilts. 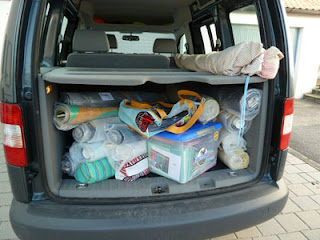 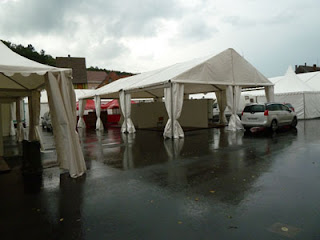 I arrived on time to meet Dinah, Sylvie Leroux and Gul LaPorte for preparatory consultations about proceedings for hanging the next day.
My exhibition site, the Eglise St. Louis was already set up and waiting for my arrival. 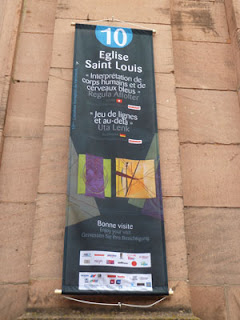 I even had almost no difficulties finding my accomodation. Ste. Marie-aux-Mines is not exactly blessed with a multitude of hotels, and people have taken to opening their homes for guests during the Carrefour, and the Mineral Fair in June, the city’s other major event during the year. I had the honor of being put up in the Chateau that I had been admiring the last time I was here. 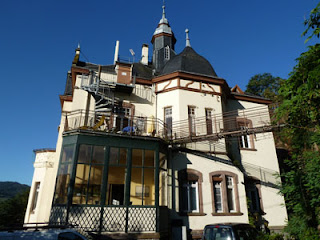 It has a view across the entire valley. 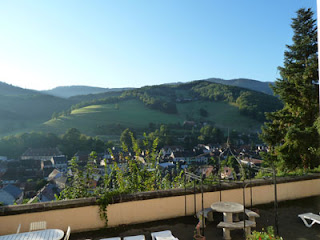 Though to reach it, an adventurous mind in definitely helpful: two kilometres of unpaved single lane road uphill through the forest is the only way to access the beautiful large old house.

On Wednesday I was given the keys for the church 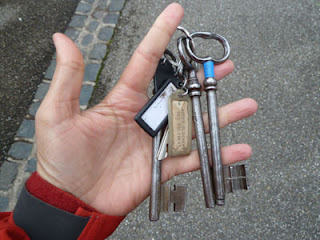 and had a little time for myself to figure out where I would place which quilt. 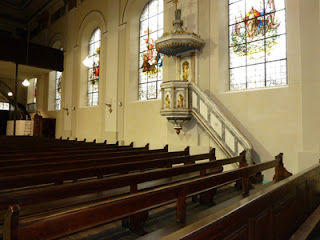 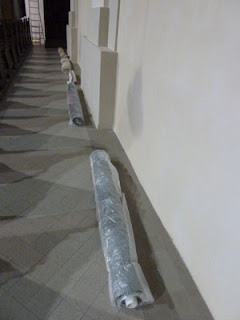 Then a technician came to help me with the hanging, temporarily he was joined by a colleague even. 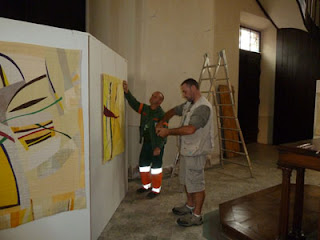 And then everything was ready and waiting for the doors to open.
Posted by Uta Lenk at Monday, September 17, 2012 No comments:

And a few more pictures of the quilts that might be on display in Ste. Marie-aux-Mines.