Days are getting longer...

Every year just a few days into February it is noticeably that the days are getting longer. I can understand that the Catholic Church has a Light Mass on  February 2. Reflections are getting clearer, more colorful, and more obvious as the sun's rays are stronger and come from a higher angle. 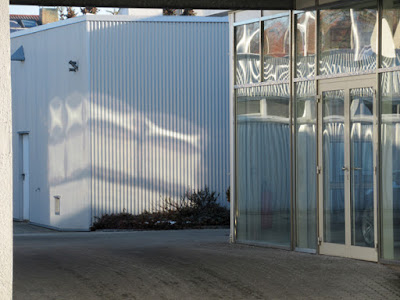 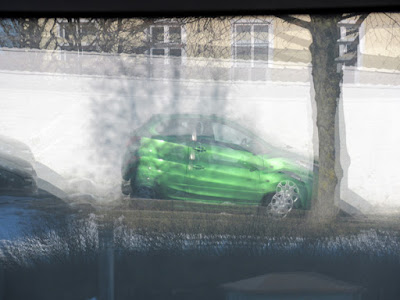 Of course, on the days when I have the early shift it is still dark. But when I get out there is still some part of the day left - definitely a plus on this new job's side. I have been asked whether I prefer working the early shift or the late shift, and I haven't really been able to make up my mind. Both have their advantage. Perhaps the late shift is a bit less stressful than the early shift, and it also gives me full mornings to try to get things done. In any case, yesterday was a day off and I managed to finish quilting the EQA quilt that is being made as a joint effort by the EQA's various countries' International Representatives on the occasion of the EQA's 30th anniversary this year. Every Representative made one block in the same, the Swiss Rep (who was born in Canada) pieced them together, I agreed to do the longarm quilting, the backside fabric was donated from Poland, and the Spanish Representative who is living in Germany will put on the finishing touches. 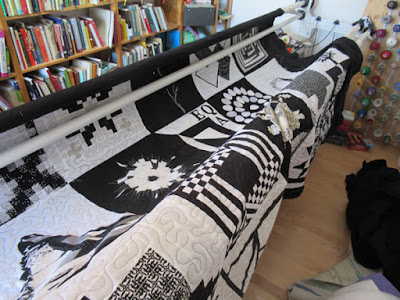 Then there was Valentine's Day - not a day that is usually being paid much attention to in our family. But this year we had a surprise. The local newspaper called, they were writing an article about 'prominent couples' in the region, and how they had met and fallen in love. I wasn't home when they called, my husband gave them a slightly edited version of how it had really happened, and instead of receiving a card or flowers on the day itself I kept getting comments about the article in the paper. This is the photo we submitted, my son took it after I got home. 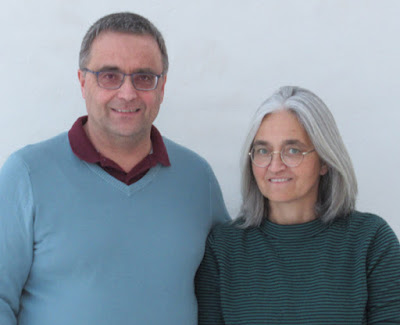 Since then, I have been to the hairdresser's, so the hair is shorter again.
Looking forward to a free weekend - with lots of stitching on my agenda. In theory...
Posted by Uta Lenk at Wednesday, February 20, 2019 No comments:

We have had lots of snow the past two days and for the first time my son was happy with school - because it was called off. He could stay home. 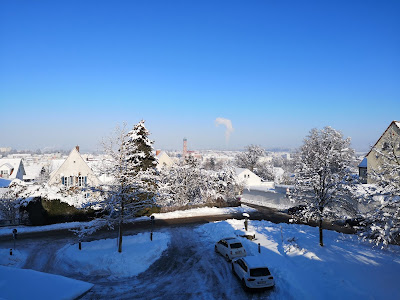 The past few weeks I have gone through a block of schooling, add to that a late sign-in for a university course and getting bumped up to third semester, which means I have to catch up a bit on the subject side, if not on the ‘how to study at university’ or ‘how to write a research paper’ or ‘how to give a successful presentation’ side. In between I went to Aachen to bury a dear friend of mine, a year younger than I am, and a week later took another train trip to the northwest for a two-day-meeting of the German Patchwork Guild’s ‘extended Board Meeting’.

And then I also had to struggle against one of my biggest weaknesses. I do have a few, but this one is so difficult to overcome… I hate doing bookkeeping, even if it would be to my own benefit. Because quite a bit of the things I do for ther guild (such as shipping 70,273-Project-Quilts around, or going to Birmingham for the EQA meeting) I do get recompensation for. So if I managed to keep the bookkeeping in order it would all be easy every few months. The way I do it it turns into a hassle and a nightmare toward the end of the fiscal year (or even after the cashier has closed shop and only grudgingly takes my papers) – and then I get a whole bunch of money at once. That’s what I did this past Saturday and Sunday, besides baking two different cakes for two different types of fund-raising cake sales. One of which turned out a failure and could not be sold but tastes really good when eaten at home.

In any case – I have been stitching some. The “Daily Somethings” are easily packed when going out of town, and I am almost on time, too. On the last day of working on the ward early January I had picked up a piece of round plastic somewhere along the day and had wanted to put it into the wrapping organza for that day. Of course, I left it in the pocket of my uniform when putting that into the washing bin and thought it lost for good. When I picked up my uniforms today exactly that piece of plastic was carefully folded into the uniform top. 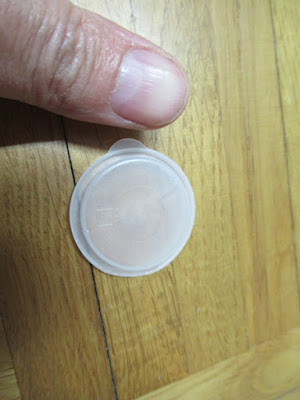 So that will be today’ Daily Something to be added. 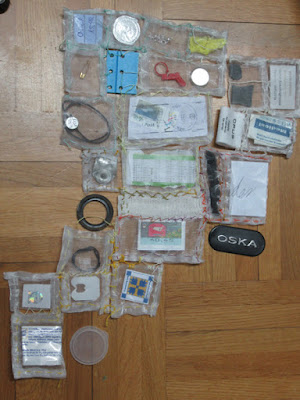 I have taken the chance, too, to finally learn myself a stitch from my Encyclopedia of Embroidery Stitches that I had not been able to incorporate into the A Scrap a Day. It's called Insertion Stitch - Buttonhole. Only the simple one, so far, but I think I might try the knotted one, too, eventually. 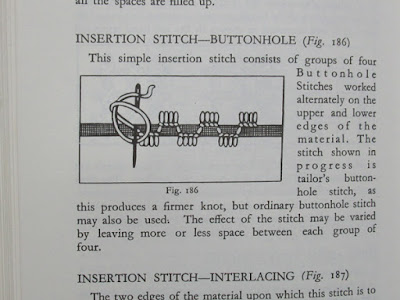