Early in December I spent a few days on Lake Constance, trying to relax after two and a half weeks of working in ICU. I went to the thermal baths, tried to ignore that I had chosen an apartment completely sub-standard (ugly and cold!), and just tried to relax. Participated in two interesting zoom sessions, read books in bed, knitted...

Since then I have returned to the operating room, but a total of three weeks away also meant that I had to reorient myself. After only four weeks since beginning I hadn’t been acclimatised enough that this is an easy task. This pandemic is posing an additional strain on my phase of introduction to the new job.

However, I have taken myself back to the sewing maching, if only short periods so far, but I am getting back into a bit of a sewing mood. Since I challenged myself about wearing the purple pants vs. finishing the quilt, I took the purple monster off the design wall and have resumed stitching the letters. 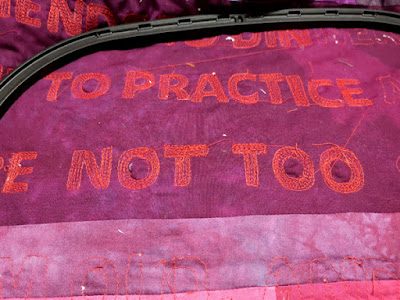 I have already worn the purple pants, too, so I guess I have declared myself officially an old woman, according to the statement of Jenny’s poem. The strange thing is that in this short time in the operating room I have repeatedly seen people on the operating table who, by sheer numbers, are just a very few years older than I am – or my age even! – and I look at them and think, “this is an old person!” I am shocked to see them, appearing a lot older (to me) than I feel about myself. Gives me a lot to think about every time it happens. Am I much older than I think?

We have had terrible weather in terms of low fog, lack of sunshine, and ten days ago my husband and I just took off on Sunday, driving south, until we would – as pre-determined by a weather app – find sunshine. There we took a long walk along the shores of Lake Chiemsee, trying to jumpstart our vitamin D production. 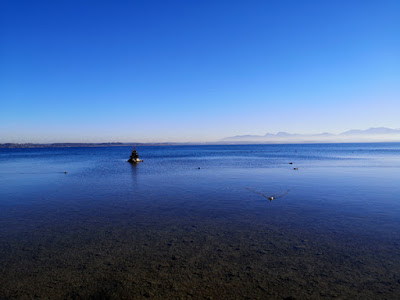 Christmas has come and (almost) gone, 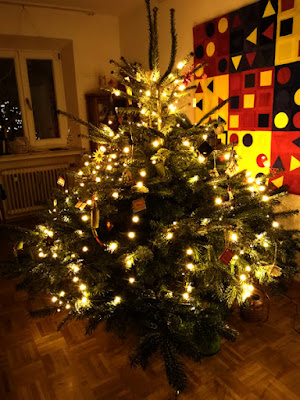 mother-in-law is staging a personal show to attract attention, my husband is working as always, and next year I probably will be working at least one of the days, too.

Germany is going through a lot of discussion how to deal with the new virus variant, and supposedly we will end the year similarly as it started, with restrictions and/or lockdown... So it’s good to be able to sit down with knitting, or work on my contribution to SAQA Europe/Middle East’s project of the “Orient Express”.

The thing under the text is supposed to imitate this: 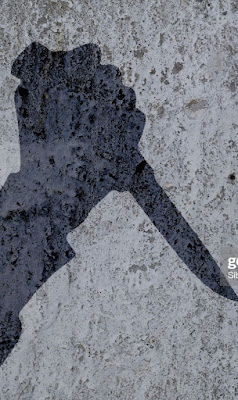 I hope to be able to make it more recognizable through quilting.


And I want to take up again a regular schedule for exercising. Even in weather like this. 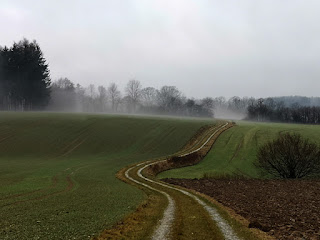 Wishing you all a merry ducky Christmas! 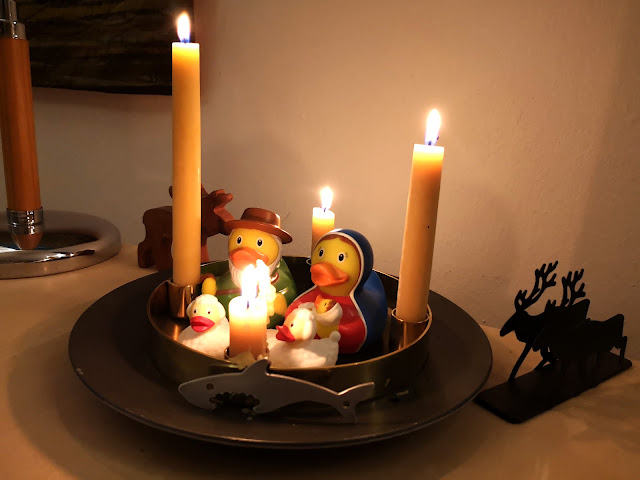 It is my turn today to be featured as the week's supplyer of the SAQA Europe and Middle East's group picture on facebook and Instagram.

I had been scheduled for this date for a long time, and for almost that whole time I had thought I would be posting the picture of my quilt that is in the Forced to Flee exhibit, currently traveling with SAQA (and which will next be shown at Bedford Gallery @ the Lesher Center for the Arts, Walnut Creek, California: February 26 - June 19, 2022). But on the past Monday, when I joined the SAQA regional zoom meeting after not having been able to for a couple of times, and they were talking about music in quilts, how music affects us in our quilting, the importance of music for our quilting, I realized that I had a rather musical quilt in the backdrop. It has relatively recently come home from traveling with an exhibition organized by France Patchwork, and I realized that it would be a perfect candidate for the group picture. So I changed my mind, and because I hadn't sent anything to Birgit Schüller yet, it was easy. Then I realized that I had not even posted anything about this quilt on the blog either, although it is part of my series text messages (which currently gives me a headache because I have lost count of how many quilts I have made, but that is another story). This must have happened because I made it in a very brief period of time, just before the deadline. Then it was accepted quickly, gone right away, and I had not even had time to get a proper photo.

So here is a little bit of introduction to the quilt. It got started by coincicdence. I saw France Patchwork's challenge fabric at Ste. Marie-aux-Mines: a piece of linen, with a good amount of yellow. Any kind of yellow gets me hooked, and this was very fine linen. But when I asked whether I could buy a piece Catherine Bonte just gave it to me, between EQA representatives, I guess, and said "but you do have to enter!" Title of the challenge: Do Ré Mi Lin. Part of the musical scale, with a slur into fabric, should be easy. Plenty of time, the winter passes, spring rolls around, and here I am, haven't even started on the piece. But suddenly it all came together. I had this cut out sun lying around, 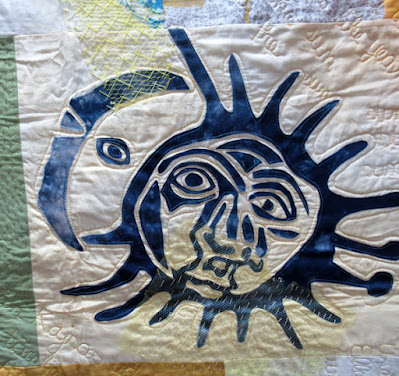 which came from some other piece I was making, and definitely did not want it to go to waste. Sun always goes with yellow, I have this thing with light, I love music, and when you talk about sun and music you just have to think about the Beatles' song "Here comes the sun" (composed by George Harrison), wouldn't you agree? I know other poems and lyrics on the topic of the sun, one of my absolute favorite songs is a Swedish folk song about a sunset on Kajsa's bank on the lake, 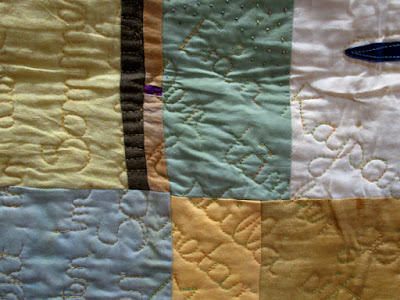 a few lines from Ingeborg Bachmann, something Spanish, 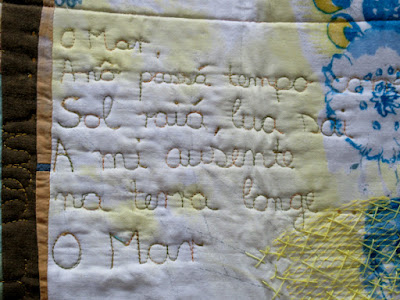 and a French chancon. A couple of Afghanistan embroideries from the Guldusi project went in as well, 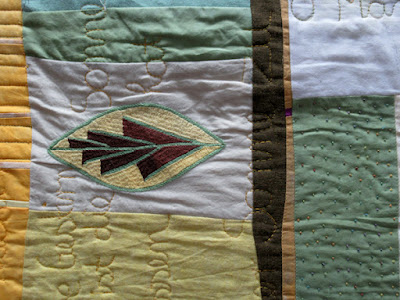 and it all just came together as text messages 20. 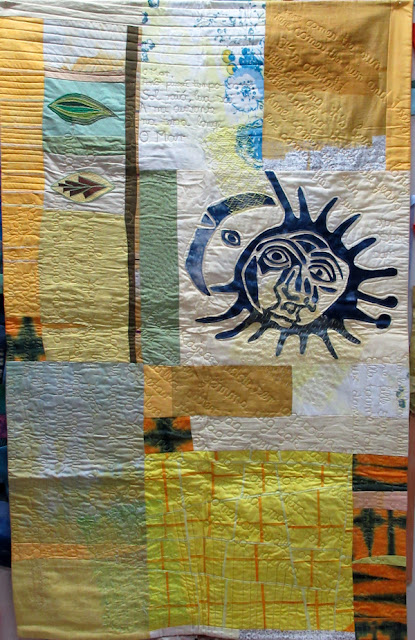 Can't believe I didn't write about this one - it was such a happy making, so easy and flow like. If all quilt making was like this, and the sun were out ...