I am a sucker for scraps, I must have mentioned this before. And as my 'big' projects right now are either waiting to be accepted or rejected, or will be entered somewhere I can't really write about anything else. So while I am running interior dialogues as to how to proceed with the thing that is behind me on the wall - can I come up with another way of transferring the text onto the top instead of using the dissolvable film I have been using so far, because I don't want to have to boil this one to dissolve the film...? - I spent a part of the afternoon sorting through a box of scraps which has been under my feet for a while. 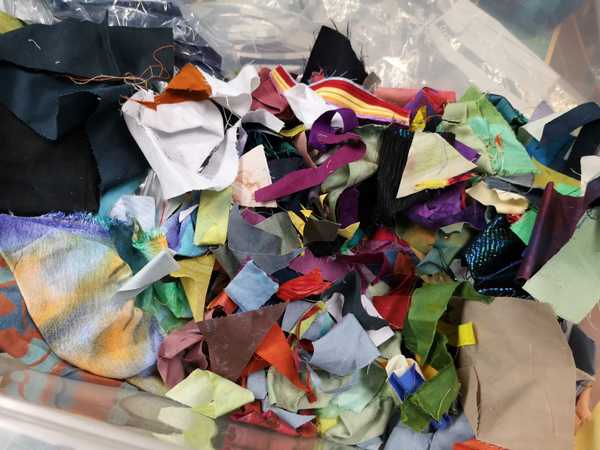 I am certain many people have boxes like these. The sorting process is soothing, and I try to decide whether they are still eligible to be included in crazy scrapping, then they get sorted into stacks according to color, perhaps value as well.

And just how small do scraps have to get before you throw them into the bin without regret? 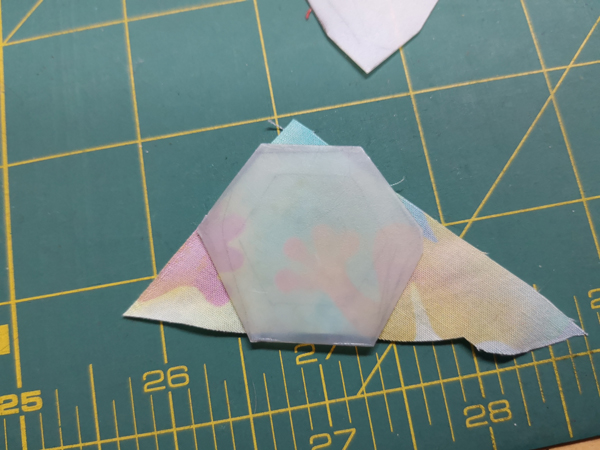 I have a few templates lyeing around which determine the future according to size of scraps that occur. This hexagon is the smallest one of the templates and takes care of really small scraps. The hexagons finish at half an inch. I also do diamonds. One inch. 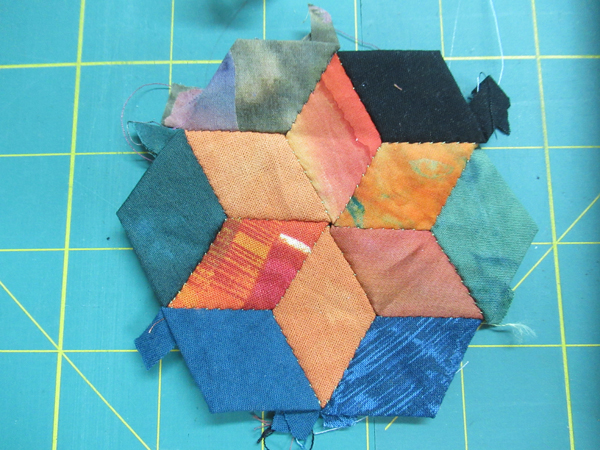 For this one, I timed myself the other day. If the pieces have been prepared (they are sorted in bags by light - medium - dark values) sewing this takes about 20something minutes. Not that it matters to know that, really, during making. Perhaps later, when - if - the thing should ever get finished and some smart viewer asks 'so how long did it take you to make that?'

I haven't come up with a really good method for that text transferral yet, but I did clean out that box and could put something else into it. One thing ticked off the list.

Tomorrow I will be teaching a three-hour-online version of my IQ class for the German Guild's "Summer Academy". Preparing for that has taken quite a bit of time during the last two weeks (and I had a busy time at work). I never wanted to teach online. I had thought I was finished teaching that class. What a combination.

I do admit, I am a bit nervous. Sending out the announcement e-mail was ridden with bumps and errors already. The past few days my internet connection has been instable, which is not a good prerequisite for online activities that are supposed to be constant, for at least three hours. Let's just hope things go well.

30 degrees Celcius is hot for Germany. We haven’t had many days like that yet this year. But today we did, and the forecast is predicting a few more. I stayed inside for a good part of the day, finishing a small quilt I had started after the SAQA Europe/Middle East Zoom Meeting had agreed that we would be having monthly challenges to a cue. Can’t remember who decides on the cues, but it doesn’t really matter. It’s no obligation to participate and I decided I would if the cue agrees with me, but won’t if it doesn’t. Then the first cue was ‘home’ and I immediately thought ‘oh no…’. German is my mother tongue, and English ‘home’ frequently is translated as ‘Heimat’ (although it could be ‘Zuhause’ as well), and ‘Heimat’ is a term that has taken a shift towards more and more nationalistic (it feels to me) tendencies that I don’t feel comfortable with. I live in a place that does not feel ‘home’ to me, in fact, I think for the largest part of my life I haven’t lived in a place that I would call home, emotionally. So transforming a picture of the place where I live (or want to live) into a small quilt as Els Mommers so beautifully does about her home, the island of Saba.  (Here is an article on Els winning first prize for a quilt at the International Quilt Festival in Mexico.)

That is not something I can do, pictorial in quilts is not mine. But a word has letters, is a text, and under the shower I did come up with a kind of design that plays with the letters, their arrangement, shape. Although I did not get far after the first conception of an idea, a sketch, and the two first seams in the middle of July, I sat down today and said ‘this needs to be finished or you might as well quit fooling yourself’. 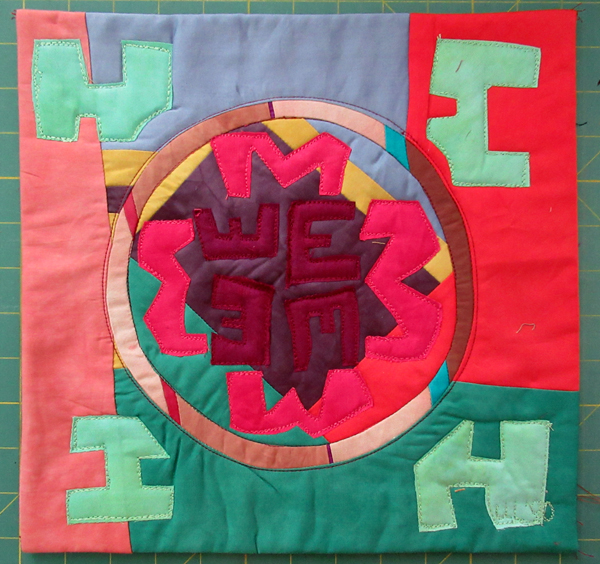 I call it ‘How do you spell that and what is it anyway? (text messages 23)’

This cue found me in a phase when I have been doing a lot of thinking about this country I live in, should call my home, but it just doesn’t feel like I would want it to do.

It is summer, people are staying at home or vacationing in Germany, only few are going abroad. Debates about mandatory testing of returning tourists, demonstrations against Covid19-restrictions (face masks are infringing on our personal liberty!), experiences of people’s rudeness towards each other is making me worried about the direction this society is going. As I am listening to ‘Pale Rider’ yet another time – it has become the soundtrack for my experience of the pandemic in limbo – I am growing more and more distanced towards my fellow country folks. And that showed up in this quilt, I guess.

And on to the carousel... (Diary of recovery)

The quilt that I am not writing about anymore is finished. I took it off the longarm a week ago.  Quilting had provided a serious problem because after the first few lines I realized that the longarm machine did not like the pieces of reflecting fabric that are included in the quilt. The thread kept breaking, and after the third or fourth time I decided, I would do that in a controlled manner. I interrupted the line at each piece of reflector fabric. However, I also decided that I did not want to do on-the-spot-securing of thread when stopping or beginning. At that point not really realizing just how many threads that needed to be sunk this method would produce. I mean, I know I had taken that decision consciously. But I did curse myself when I took the quilt off the machine – no, even earlier, when the stopping and starting again added so many more movements to be done and actions to be taken to the exercise of adjusting the locks. 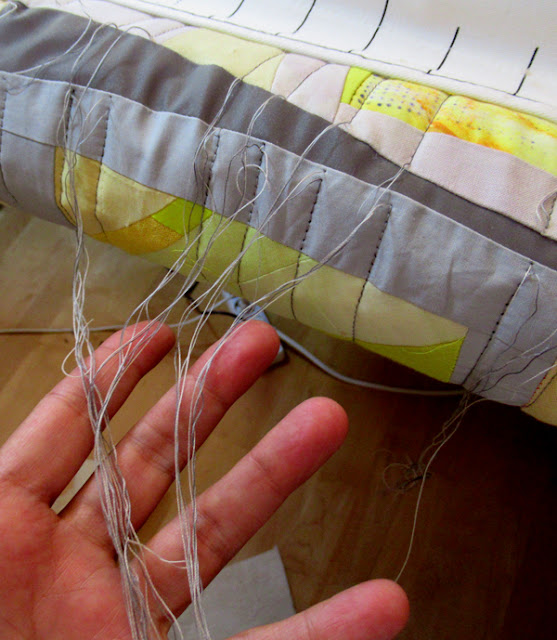 And the deadline for Q=A=Q approaching, and sinking threads not being my favorite part of finishing a quilt… Definitely an activity I would outsource immediately if I had the financial means or the human resources department in the background that could deal with that!

At some point I was near to panicking and complained to Kathy about it in our mails. She wisely suggested I pull the threads to the back, proceed with the facings, have it photographed on time and deal with sinking them at a later time. This advice grounded me to a certain degree, because it made me think about how much time it would cost me to pull the threads to the back in comparison to sinking them right away. I had been smart enough to time myself for one complete process of sinking. I could do one double set of threads in one minute and 15 seconds. That was a single process which went normally well, no difficulties, tangles, breaks. So I figured make it one minute and a half to two minutes for an averaging calculation, and I briefly surveyed the number of threads left. Multiply by – and it added up to close to four hours of sinking threads. At the beginning of a hot Sunday without family disturbances – that seemed doable. And it was, by Sunday evening it was done. Now with the facings I did indeed take the liberty to finish them so far as to make a photo possible, but the sleeve and upper and lower facings still need to be attached. Nevertheless, I declare it finished.

But somehow entries and I seem to be on a strange footing – because the photographer sent me a small file only, 72 pixels, not enough MB. Which I discovered yesterday evening when I wanted to get the entry process done with. I wrote an email and could only hope that they had not messed up with the camera settings when taking the photo, and that they would be able to send me a decent file before the deadline ran out. Luckily this worked out, I have managed to register with the new entry system (compared to last time entry a few years ago), and although the system wanted to circle me through the process several times and I thought I had lost everything and would need to re-type everything, in the end it worked. (I don’t need to mention that my printer did not want to print the receipt at first, but by now I am smart enough not to close that page until I have indeed seen the correctly printed page.) I am set on entering this quilt in all the upcoming possibilities of entering, and there are at least 5 I know of currently, could be more) until it gets accepted somewhere.

Off to new horizons, though. It felt good to complete a piece, in a relatively short time, and not a small one at that (58 by 63 inches). I have started on a new idea. For one never knows – this one might be accepted right away and then I might want to have others to enter in the following calls for entry.