A friend of mine had mentioned recently in a message that she needed to find some ways to raise funds to buy fabric for her group which gets together regularly and makes what commonly are called ‘heart pillows’ here in Germany: heart shaped pillows that are distributed to breast cancer patients on the respective wards. I admire and respect those kinds of activities, even though I don’t participate in anything like that. So I offered her that I would go through my boxes and pick out some fabrics that they could use. After all, there is an abundance of fabric stashed away here that will never get used, at least not by me in my lifetime. And as my husband has been talking more frequently about ‘downsizing in preparation for a next move’, even challenging me by boasting how much he has done... (yes, he did reduce his huge collection of CDs the other day, and I admit I have much more stuff than he does) I figured it wouldn’t matter at all to give away some of it. This activity developed into a serious crisis for the accessibility of my studio, but it turned into a flow eventually. 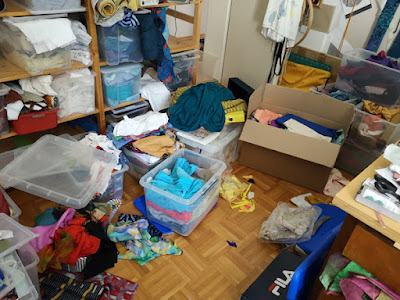 In the end I posted a package with more than 17 Kilograms of fabric to this group (the carton in the upper picture, more on the right). I could have posted at least another package of the same size, but I withheld from sending ‘all my brown fabrics’ as I thought that color is not really appropriate for that purpose. Did get rid of almost all my pinks and purples, though. Not my colors, no need to hang on to them. And – do I really need three boxes of green? I hardly ever work in green, I wonder where all that came from. Lots of green scraps, too. Anybody want any? Just let me know!

A couple of days later,  this destashing extended itself into a thorough clearing of book shelves. My son wants to use the room where my longarm is not longer blocking everything, but there are book shelves in there. Our library. He wants those shelves to take up less space, i.e. dismantle at least one or two sections.

I have always been a book lover, and I love buying and having books. For a while I was regularly going to a Women’s Bookstore whose owner was a friend, to support the business, or I was collecting literature from female authors from the early 20th century. But my husband – correctly - keeps saying we need to size down as he thinks our next living quarters will be much smaller. So I went through the shelves, pretty rigorously, taking out books in three different categories: the stack to read now and then decide whether they will stay, the stack that can go to second hand books or the newly introduced book box in town, the stack which is not likely to find any appreciants around here (mostly English language books, alas, I don’t know anybody here who reads English).

The rearranging of the room as such will happen according to the Junior’s plans.

As it turns out, I started on one of the books from the stack 'read, and then decide', and it happened to be a book I bought in 1994, then still an English academic person, so it has moved at least 5 times, if not 6 or 7, it might actually have come from the States with me. As it turns out, although the author is famous, and I do admire her for her position in literary history and some other aspects, this particular book proved to be rather dated with respect to certain opinions, and racism. I could perhaps tolerated it had I still been an academic, but since I am now only a reader for pleasure, I do take the liberty to not finish books that are too backward, or that don't catch my attention. I read only one of the three stories, started each of the other two, decided against them, and then it went into the bin. So Junior's desire has been helpful indeed.