QuiltCon Together, at home by myself...

Last weekend I spent a lot of hours on the computer. In a rather blues-ish period in the fall I had generously signed up for online classes with QuiltCon when the sign-up opened up for members of MQG, and now it was time to reap the harvest. Of course, my request for the entire QuiltCon days/weekend off had not been met quite to my desire, I still had to work on Friday. But I had Friday evening, Saturday and Sunday and Monday, and so I could spread out the classes that were on demand. Three lectures I had signed up for were 'live' (but pre-recorded nevertheless) and I did manage to catch those on time, and I had messed up a bit with remembering my schedule, so I attended the Q+A session for one class before I had actually done the class. I consider these mishaps a beginner's experiences because, after all, this was the first time I attended an online event like this. I have taught a couple of online classes myself, and I attended the online class by Phyllis Cullen and Cindy Richard on doing faces, but that is entirely different from a whole weekend packed with several classes.

To be honest, I was very disappointed with the lectures and classes I witnessed 'live'. Especially with the two lectures that were calles 'tours' of the International Quilt Museum. I just did not like her way of presenting (mostly herself instead of the quilts, I thought) and suffered through because I did want to see the quilts she had chosen. So I am not going to say more about those. One other lecture in my opinion by far did not supply what had been announced in the title, and with her I was also wondering, why on earth if you are prerecording this, do you have to have the situation that you are dealing with a scratchy throat, and have to keep commenting on this? Not going to mention that one in any more detail either.

The workshops I took, on the other hand, were very well presented, clearly structured, informative and fun.

Tara Faughnan on hand-sewing could not tell me anything new, but it was interesting to see how she explained how she arranges things, and this was only a short session. Matching the points in a six-pointed star is something I have done before, and I was not really careful enough when doing it alongside her explanation, so I had to take it out again afterwards. 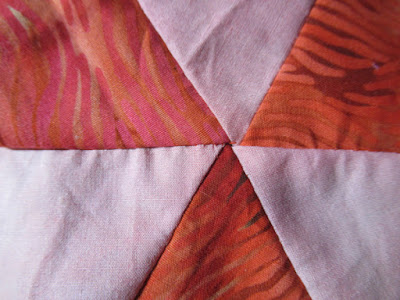 The second attempt turned out better, and the few follow-ups I have done since then have been perfect (enough for mre) from the start.

The class on needle-turn appliqué I had signed up for because at that time I was writing an article on @nadiamamelouk and her self-developed style of needle-appliqué. I was considering trying it out and had wanted to compare, but when I tried Nadia's technique I soon found out that I absolutely love her results, but this is not for me. After 10 minutes into the workshop by Jen Kingswell I knew she wasn't going to change my mind about this, and although I would have enjoyed listening to her Australian English for a while I decided not to finish the entire workshop.

The class by Sylvia Schaefer on "Designing with Negative Space" was the one where I attended the Q+A session first, before the class. Which is not really a smart way to do it, I completely agree with you on this one. Because it kicks you out of being a valuable participant in the questioning part. I wasn't happy with the Q+A session, and in a way I had the impression that I would have wanted more 'meat' in her answers, I would have liked her to make a better prepared impression. but then I wasn't well prepared myself, and I guess I can't really critcize her then. The workshop in itself was very good, though. Well structured, interesting examples for her list of various means of arriving at a 'negative space' for a modern quilt design, and I learned a lot from her. 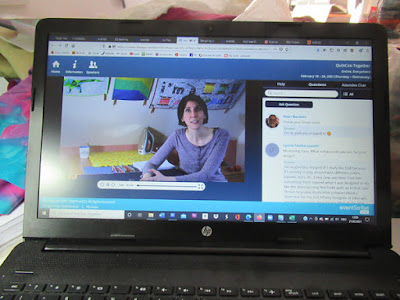 But the highlight in classes, for me, were the two classes on EQ8 that I took with Cheryl Brickney, an introduction, and 'alternative grids'. An engineer by training, and abviously very versatile with this program, she had a completely structured way of presenting the program, walking us through the various worktables, repeating steps she had just taken... 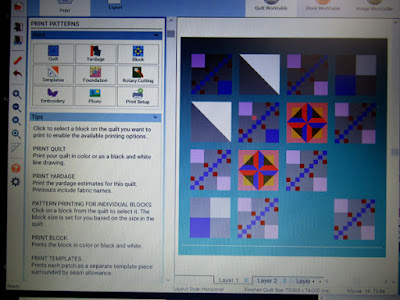 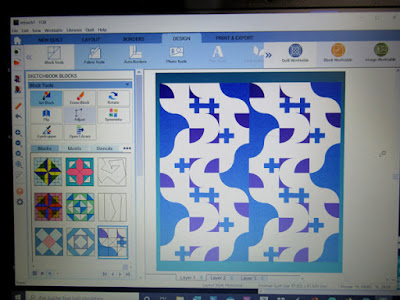 I ended up with not very impressive in itself beginner's designs, but nevertheless I was impressed with how quickly I had understood what can be done (well, at least a little bit understood) where I had been pretty much at a loss when trying to find it out by myself. 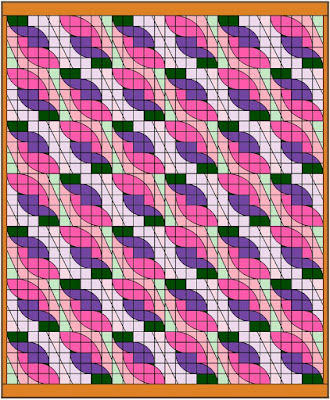 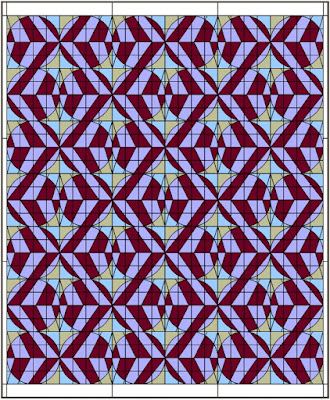 Will I use this software to design quilts? I don't know, because it is absolutely not my way of working with a pre-drafted design, simply 'reproducing' a pattern like that in fabric when I have already seen it on the screen is not tempting for me. But I will certainly play around with the program a bit, see where it takes me, what options pop up, for example with the 'randomizing' function in terms of color choices.

Did I enjoy this experience of participating in an online event? Yes, and no. It was good to have at least a bit of quilting-related instruction, and it certainly is a big asset to be able to take several classes on a weekend without the additional cost of traveling, hotel, meals, etc. And if one is more careful about choosing the topic of the classes than I was in my blues-y mood when I did sign up, it might turn into a truly exciting learning experience. I appreciated the 'on demand' format, because I could stop the video, rewind, check back whether I had understood correctly, take a break for tea with my husband, and do the exercises without feeling rushed. But it is simply not the same as being in a crowd, together with other participants in a classroom, talking directly to the teacher and the others. But I do love the traveling part of quilt festivals, I am a traveler at heart and in soul and simply sitting in my studio with a computer is ... a different experience.

Yes, I am glad we have been able to develop the online mode of teaching during the pandemic, just imagine how terrible it would have been if we had not had this! No, I don't think everybody does a wonderful job with their online performances, and it should be taken into consideration that some ways of presenting might be ok live, but not in a recorded video. Yes, it was good to take the structured and well-prepared classes at own speed. But with the classes I taught myself it was the same feeling on the other side of the spectrum as I had on this occasion: it's simply much more fun to have the real experience.