When the year began I was all psyched up that I would not let the lockdown wear (or psychologically lock) me down, I had planned to post regularly, and not whine about lockdown, corona, whatever. Just concentrate on living an as-good-as-possible life under the current conditions. But three weeks of home-schooling for the nursing course and the developments with the EU-vaccine disaster shut me up. I just couldn't write and not write about these issues, I was so upset. It can't be changed, though, and all my worries about my sons' generation, the economy especially for smaller shops and restaurants which are still closed, although they persist, they don't belong here. So...

Yesterday I finished a quilt top, completion #4 of the year. I had started it about a year ago after I had received Denyse Schmidt's templates for the "Free Wheeling Single Girl" pattern I had seen on Instagram. Of course, the 2019 sew-along was over by the time I became aware of the pattern, and I am not good at sew-alongs anyway. So I got started, liked the ease of how well the pieces came together, determined to use up old workshop samples that never got anywhere - and had another UFO, which stalled when the virus hit. I had tried out different arrangements of the block at first, none of which really satisfied me, though. 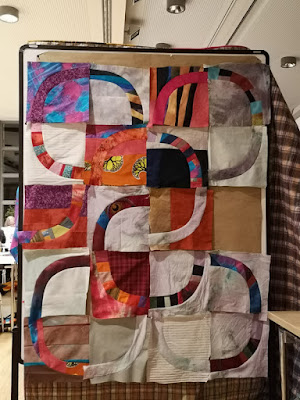 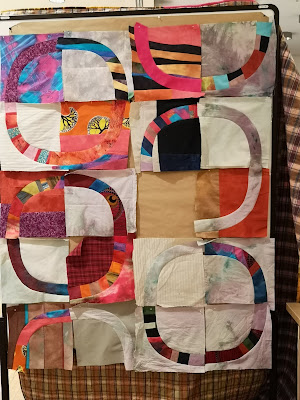 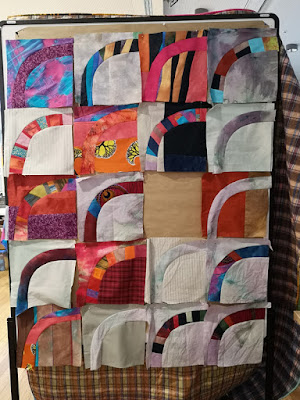 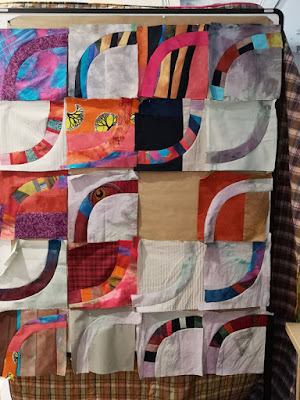 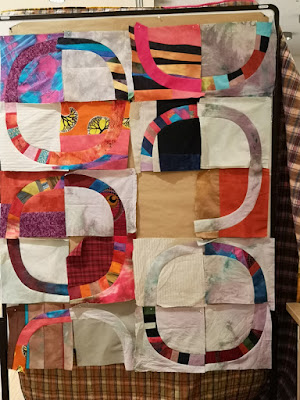 Other projects intervened, but when I came across the box after Christmas I made up my mind to get this one finished relatively quickly. I stuck with the original arrangement of the blocks, although I think the off-set arrangement as in the last picture above might be very attractive as well, in another color arrangement.

It was the final top to be quilted on my longarm while it is still in my house, as it is going to move to another place soon. 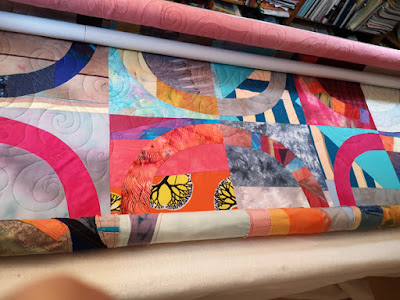 Now it only needs the binding. 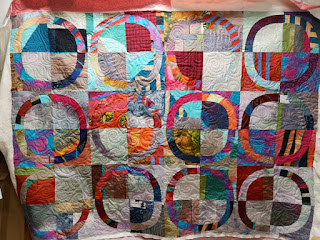 Meanwhile lockdown has been extended yet again, until March 7th. Hairdressers are allowed to open on March 1st. I know many people think hairdressers are very important, but for me some other things would have been more urgent. It is frustrating ... but today the sun is shining and I will go for a long walk in the snow.