The sweater that was my first finish of the year early in January was knit from hand-spun yarn which I had completed during the first phase of lockdown last year. 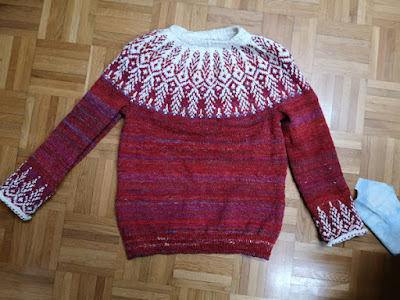 Ever since August I had been working on another batch of a sweater quantity of hand-spun yarn which I wanted to give to a friend for her birthday. One of the three strands I plyed together had been one of the first things I carded on my carder.

It meant juggling with several bobbins because the three strands were not exactly the same diameter (not intended to!), and so when I plyed them the bobbins would empty differently. At some point I became afraid it would not be enough, I would have to card more, so I re-ordered a bit of turquoise sari silk which had gone into my own concoction and which I had completely used up. And meant to be without it after the conclusion of this project. That is not the case now - I have spun all this yarn, but I still have 100g turquoise sari silk which I now need to find a new project for... Because I ended up not needing it. Unless she claims the total is not enough, then I can card some more. 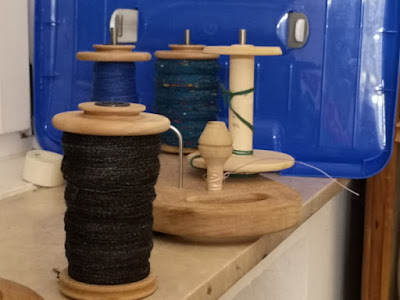 Then, finally, rinsing it in warm water to settle the ply. 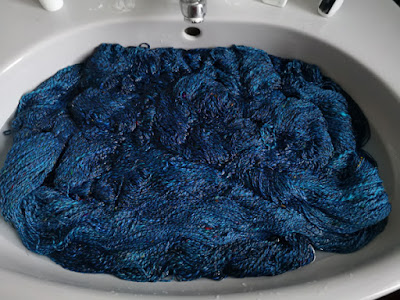 And drip drying it in the heater room, and taken outside for photo in the snow. (The yellow and beige strands were leftovers on bobbins from other projects and do not belong in this batch.) 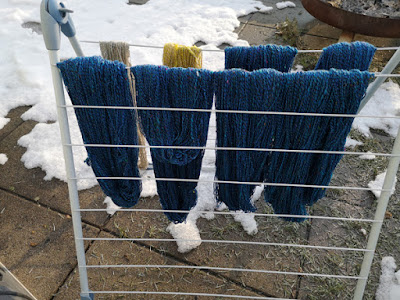 It is a wonderful combination of different blue shades and one ply of very dark Gray alpaca.

At some point just before finishing taking off the plyed yarn from a bobbin there was a break and I came away with a rather short piece of yarn. I decided not to tie a knot but instead used it for a very small swatch because I wanted to see how this yarn looked knitted up before I sent it away. 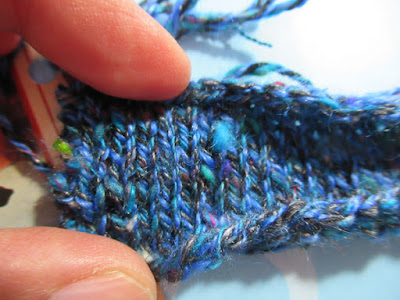 I am sending the swatch with the birthday card, but of course she will have to make her own swatch before she begins a project. It will be interesting what this yarn will turn into.

That project  meant a lot of hours - spinning three different strands, and then plying them, and it had to be truly enough for her, as she is very TALL! But it was fun. And so this really was my second finish of the year, before the Freewheeling Single Girl Top.

Meanwhile I have started another spinning project - actually, two. One is a variant  of this project. Instead of two blue strands and a black one, I am making one blue strand, one as a mixture of merino, yak and yellow and grey silk, 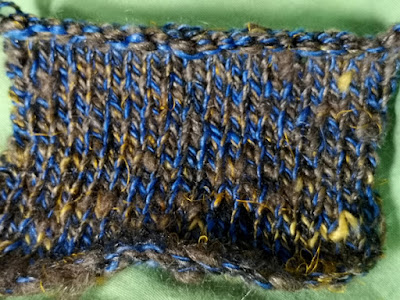 and the black one. I think it is amazing how different the sample looks, one can see that 33% difference is already a lot of difference! The strand made from yak, merino and silks feels gorgeous, although it is a slightly challenging combination to spin, with the long silk and merino fibres and the short yak.

The other project started when one member of our spinning group called for a 'fibre exchange' as a substitute for our annual musical chair spinning. I participated, but I stuck to the rules we had the past years, throwing dice for length of spinning time and direction of 'travel' , by myself. The initiator blended the 8 different fibres/colors together. I had not understood that this time rules were laxer. So I ended up with a bobbin full of a very diversely colored thread. 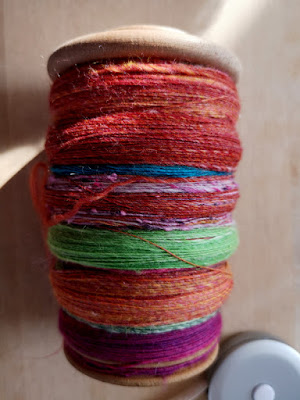 In the past two years I have plyed the results in two-ply yarns and turned them into moebius shawls. This year I am planning a three-ply, and the second thread will be a maroon silk which I bought recently I don't know why (definitely not my color... but I have started on this silk fascination, and it was on sale). For the third thread I am thinking about a mixture of purples and off-reds. Should be a very interesting combination, but that is ways off before it will be finished.

Email ThisBlogThis!Share to TwitterShare to FacebookShare to Pinterest
Labels: spinning