According to media and rumors and whatever we will most likely go into yet another extension of lockdown, possible even stricter still, although that is very hard to imagine. We are supposed to know by Tuesday night. It is getting very difficult to bear. My husband said he listened to an interview with a socio-psychologist on the radio this morning, and that person lamented that at this stage it is only virologists who are involved in advising politicians. Nobody is talking to sociologists, psychologists, and (psychological) long-term effects on the people who are being locked up are not being taken into account. That is what I mean when I say “what is this going to do to all of us?” How do we calculate longterm effects in comparison to shutdown of shops?  I try to reach out to friends by phone, catching up with them, chatting about what is, and what did not happen. But it is getting more and more difficult to keep spirits up.

And I try to keep myself busy – besides studying for my home schooling and ultimately for my exam. Therefore I can now announce the third finish of the year. Third? you say. Yes, there was a second finish which I wont talk about right now but will show here later. And this third one, too, you will not get to see in full completion yet, either, (although there was a photo of the finished top in this post) because it will be revealed in mid-March as a sort of sew-along for members of the German Patchwork Guild. We have our next issue of the magazine coming out then, and that will include an article on how fascination with one specific block can drive one to unknown lengths.  Parallel to that, the instructions will be published for members of the Guild on the website, and we will be hosting a ‘sew along’ for several weeks on facebook.

So after taking it off the longarm the other day – having had a bit of tension problems and not too much fun with the quilting process! - 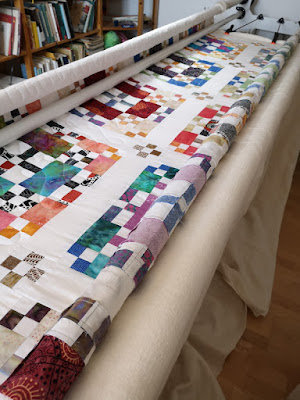 I had to finish the binding in order to be able to get a decent photo for publication in the magazine.

First it was the question whether I would use a white or blue binding. I thought white might have looked more sophisticated and design-y, but as this is a blanket and is supposed to be used as such I figured it’s bad enough that the whole quilt has a lot of white, including the back. And edges in white will probably get dirty even faster than the rest of the quilt. In the end I settled for a blue binding, because I still have some of the blue fabric that appears in blocks of the quilt repeatedly. And as it turns out, the binding is so narrow, it doesn’t really make much of an appearance. 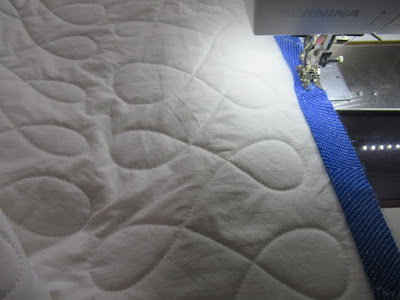 I also used this occasion to try out whether I like preparing the binding with the little plastic clips that are available now (and of which I have quite a few). I don't use pins for attaching the strip to the backside of the quilt sandwich, but pinning it over to the front does take time, and it was at least worth the try. 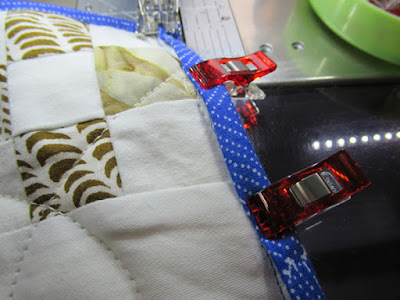 Fact is, however, that I don't like the feel of it, I find the distorsion of the quilt sandwich by the raising
through the clips more annyoing than spending the time pinning. Taking out the pins while slowly getting closer to the presser foot is easier than taking off the clips, I think, so I will stick with my tried and tested method of pinning. But it is good to know this. And there are ample other possibilities for using these clips.

It was a good choice to take the blue binding. I like the result. Looking forward to the sew-along. I have never been the ‘host’ for something like that, and it really is not characteristic for me to be doing that. But then writing instructions isn’t characteristic for me, either, and it happened. The virus causes a lot of strange things to happen.