A couple of weeks ago I finished reading “Diary of an ordinary woman” by Margaret Forster. It is a story which had been initiated by an elderly woman’s call who offered that M. Forster ‘take a look’ at the diaries she had been keeping all her life and ‘make something of it’. The main character in the book was supposedly born in 1901. The same year as my maternal grandmother. And although the story told in that book had only few parallels to my grandmother’s life, it made me think about her a lot recently.

She was born a bit prematurely on the 14th of January in 1901. Today would have been her 120th birthday, and it awes me thinking about the span we cover, assuming I still have an average of about 30 more years to live, which adds up to 150 years. This picture shows her as a little girl. 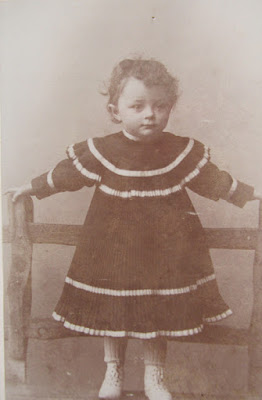 She was her parents’ only child and in fact the only grandchild from a set of five brothers on her father’s side, so I think she must have been pretty spoilt. Her father was the mayor in a small north German town, and the local museum in that town still has a room dedicated to his years as mayor.

She graduated from High School which was not common for girls at that time, and she claims she wanted to go to university to study mathematics, but that did not happen. I am not sure whether that was due to the fact that liberties her father would allow her did not reach quite that far, or whether it was due to financial reasons, after all, the 1920s were not always economically easy in Germany. But she came from a family well off, I would assume it would have been possible to make it happen if she had been really adamant about it? I don’t remember her talking about the time of the Spanish Flu, but she did survive a very difficult appendix surgery and had a remarkable scar on her right lower side to show for that. She got married, gave birth to four daughters the first of which died right at birth because the midwife and doctor (who was drunk) did not arrive in time and the baby suffocated from the placenta – that’s the story. My mother was the youngest. After World War II when she found herself in Soviet Occupation Zone it took her quite a while to realize that things weren’t ‘going to get better again soon’ and that the houses she owned in two different cities did not make her a favorite of the socialist government. My grandfather ‘went West’ in 1952 by swimming through a small river that marked the boundary between Soviet and British occupied zone after having been warned that he might be arrested soon, she stayed behind with the girls. After the uprising of 1953, however, she took advantage of an opportunity for ‘family reunification’ and followed her husband across the border with the two younger girls. The eldest had been married by then and stayed behind. My grandmother then taught handicraft and protestant religion in school to supplement their income.

Here is a picture of her holding me at the age of approximately 10 weeks. Look at that jacket she is wearing – she had bought it in Norway on a holiday, and it will reappear in just a moment. 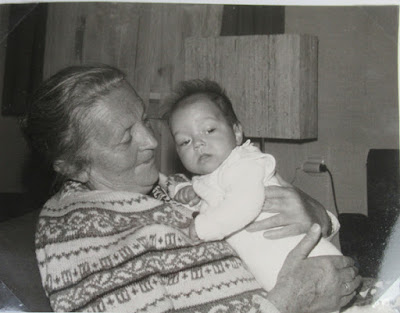 She baked the best waffles in the whole world and her packages in which she would send us home-made waffles were a reason to celebrate each and every time. My siblings and I loved those waffles. Despite the fact that we have her recipe, however, my own never tasted the same, and I think it must partly be because she was not using an electric waffle iron.

She taught me how to knit, and perhaps to crochet, too. I remember how I received a hand-wound ball of yarn with a set of red (!) knitting needles and little goodies were wound into the ball to keep me going. The yarn squeaked a bit, probably poly-something, my sweaty hands of inaptitude, but I kept going because I wanted to know what would show up next.

Later, when she was ageing and had worn that Norwegian jacket down to the last thread my mother and I went into a joint venture and reproduced that jacket in almost the same colouring. My mother took the pattern and knitted the sleeves. I made the bodice and the shoulder part after joining the sleeves to the bodice. Because we knitted differently in tension the jacket looked a bit awkward at first, but it somehow evened out after a while. I think she wore that jacket almost every day for the rest of her life. 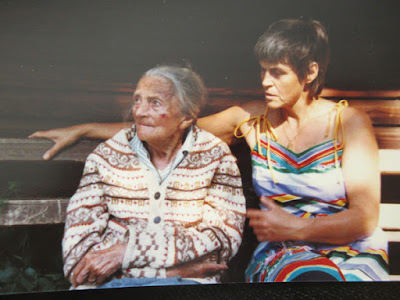 Now that I think of it, though, I am not sure she really enjoyed knitting or mending. Otherwise she might have made herself a jacket like that? She did make me a pair of wrist warmers when I asked her, but she wasn’t one who was flooding the family with hand-knitted socks or sweaters. But she got me started on the road to fibre work and my absolute love of it. But would my pieces find her approval? Who knows...

She did tell stories from her life, but for the last years of her life she was suffering from dementia, and although I remember some of them I am afraid many of her stories are lost. I wish she had kept a diary. And that I could read it, that I had asked more questions. She passed away in 1986. 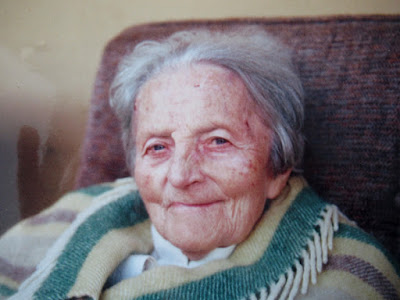