The longer… the what can I write about to make it interesting...

The longer it has been since a prior blog post, the harder it gets to sit down at the keyboard and concentrate on ‘what can I tell …?’ and make an interesting post with which I don’t overload myself or anybody else who might want to read this. And – whizzz – another couple of days have gone by and yet another and…

Of course, it is impossible to catch you up on all that has happened, and therefore I won’t even try. Just pretend I have been writing regularly and act as if all is going smoothly, not to talk about that gap. (When opening the site just now as I am posting, I saw that I had a post about the exhibition in planning mode and never published it, I will look at it soon and then get that on the blog on the weekend).

Mostly I have been knitting socks during lunch break at work. And in terms of quilting I am working on my temperature quilt. The project that had started a while ago in thought, got stalled for a considerable time due to lack of data respectively difficulty in obtaining data. And then, when I finally had the right idea about where to ask, the data were in my inbox within less than 10 minutes. That is when I started – and, me being me and my typically ambitious plans, it is a full workload. And taking time. 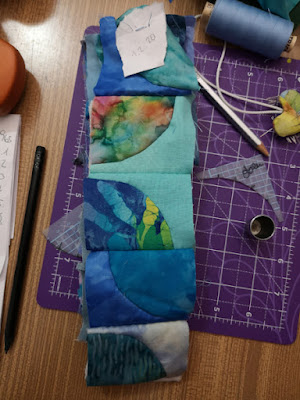 Two years combined (year of my birth, plus the year I turned 55 - which also happened to be the year Covid zapped around the world), hand-stitching… So when I saw that my friend Bea @capricornquilts had started her own temperature quilt for 2022 I talked her into joining forces. We teamed up, started an online group for members of the Patchwork Gilde Deutschland who wanted to make one, too, and have had four online meetings. 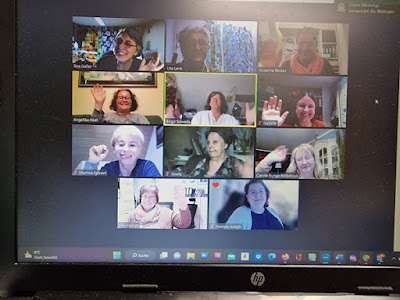 Which has resulted in the board’s offer to exhibit the results of these meetings and the efforts behind the screens at Dinkelsbühl, Germany, during the next Guild’s AGM in May. Now talk about increasing pressure to finish.

So here I am, nibbling on my still-lacking months. 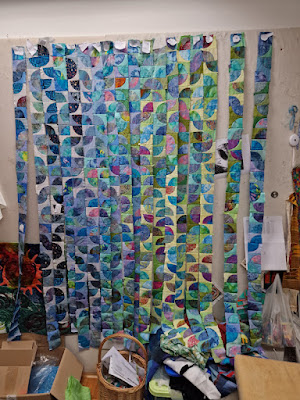 I have run out of one fabric, but as far as I could tell I only had to substitute for three days and found a close enough option. With my choice of fabrics, nobody is going to notice anyway, it doesn't disrupt a color scheme, as there is no fully-thought-through color scheme. No worries on that one.

More worried about time running out. And, of course, I had an idea how I want to include a border. Which adds another 114 blocks that need to be made after I finally finish the months. Of which I still have six and one week to go. But hey, that means I have almost 18 months finished. Not bad, after all these years. 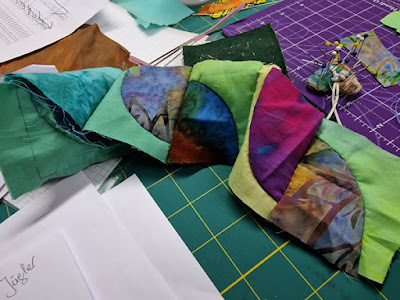 PS: First version of this text was typed yesterday morning before leaving for work. In the evening I finished another month for 2022, started the last one for 2022, which leaves me with 4 months of 1965 plus a major part of the last month of 2022. The idea about that border has been thrown out, added back in, thrown at again... obviously it is still in flux and will be determined by the date of finishing the last data block, I suppose. Always interesting to follow my own process of decision making!