Ten days ago I was guest of Emanuela Jeske in her German language podcast on quilting, patchwork and sewing. We had recorded the session a week in advance. We had first been in touch when the SAQA Europe/Middle East "Orient Express" started rolling through Europe, and the group had thought it would be nice to have a feature there, but that didn't work out for various reasons. Emanuela and I had been writing back and forth, and at some point she suggested that the two of us do that particular episode together. Which I reclined because I was not one of the people who had been overly active in the organisational matters of the Orient Express. But as my exhibition is coming up now I had agreed that we do a session on that occasion. Here is the link to the episode, as I said, in German only, sorry to non-German-speakers: https://quiltkarussell.podigee.io/92-uta-lenk

It was fun to talk to Emanuela, whom I had met briefly in person in May at the Guild's Patchworktage in Meiningen. We had not agreed on any topics beforehand, and I was simply answering her questions on the spot. Which worked well, and I think it was much more natural than if we had pre-arranged any topics.

Tomorrow I will start hanging the exhibition and have just gone through my list of "do I have enough rods to hang them all"? 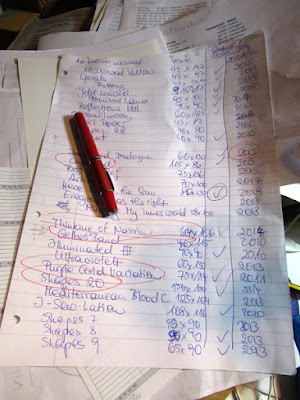 Of course I don't, but shops are open on Saturday mornings, so I can still get some. And it will be another entire week before the opening, so if something is still missing, there will be time to get it.

Actually, I would have really liked to show the quilt that is currently the header for the blog, "Everyone has the right", which has just been on display at Birmingham with SAQA's Forced to Flee. But it hasn't returned yet and Bill Reker had not been too optimistic that the turnover of the exhibition coming back from UK to SAQA shipping centre would be fast enough to get it back to me before the exhibition opens. Well, there is still another week.