Just about one year

is how long I needed to complete this little UFO of mine. 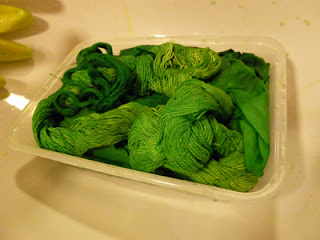 Last August I had taken Lisa Walton’s class ‚Threads to Dye for’. Of course I know how to dye fabrics, and I had been thinking about extending that knowledge to threads, but somehow I was lazy and thought it would be nice to have somebody experienced tell me at least about a few of the tricks needed and difficulties easily encountered when dyeing threads. Instead of doing all the trial and error on my own, why re-invent the wheel?
It was a fun class, because Lisa is fun to be around, and although it lasted a mere three hours I think we got a good introduction into what it takes to dye threads successfully. Most of the work is skeigning the threads so that they can be dyed easily. 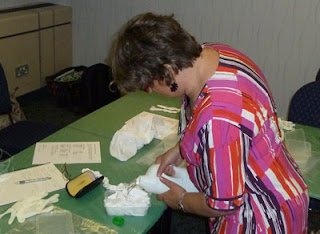 We got to take our „finished“ product in a small plastic container as shown in the picture at the top of the post. “Finished”, because it needed to be rinsed, which I did for a first time in the hotel sink. When they were dry, I just shoved them back into the container, assuming that it would not ooze any liquid that might cause major alarm at airport security on my way home. I meant to continue the rinsing etc. at home.
That didn’t happen too quickly, though, the container was sitting amongst my dyeing utensils, biding its time. Lisa had said they could easily be put into the washing machine in a little bag for hosiery, but I remained rather sceptical about that. A good friend of mine had told me about a conversation he had had with an Australian when traveling in the – both of them had commented on the length of the washing cycle of American washing machines. While the German thought the American machines were taking a rather short time, and wondering whether the clothes would be cleaner at all, the Australian thought the American machines were taking rather long before they were finished. Not having any personal experiences with Australian washing machines myself I just did not want to take the risk and put my threads into a German machine, even on a short cycle, as I did not want to end up with a Gordian knot! Plus, I don’t own any bags like that and have never seen them anywhere and did not want to start looking around.
Then, when I heard from Laura Wasilowsky  in April that she rinses all her threads by hand, I decided that that was what I was going to do, too. More rinsing, then a little bath with synthrapol, and then a rack: 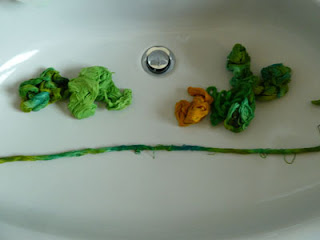 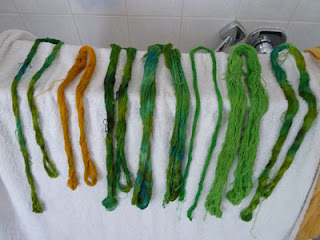 Now they are finished.

And I am curious when I will have the first opportunity of putting them to use.


I haven’t decided yet as to I will do more of this. First, I need to start a search for a good source of undyed threads I would like to use. And secondly, the skeigning... but we are going on a one week family holiday where we might actually have not much to do in the evenings. And I am not taking a sewing machine, so perhaps I could do some skeigning of those threads I have.
Posted by Uta Lenk at Monday, August 05, 2013