I have a weakness for buttons, as I have mentioned before. Right now I try to refrain from new acquisitions, telling me that I need to use some first. But I cannot guarantee that I will be strong when temptation strikes. I keep my buttons in a shoe box. Practical, cheap. But not exactly stylish.
Of course, I have other weaknesses as well. One is for baskets, and this my most beautiful example, a palmwood basket I once acquired on the . Originally I had intended it as sleeping place for my cat, but as the cat disappeared a long time ago, it has by now found a new purpose.
The other weakness, far less under control than the one for basekts, is wooden boxes/containers.
This has resulted in me owning three different sized beautiful wooden backgammon games 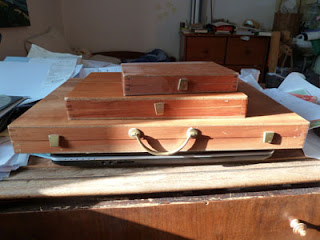 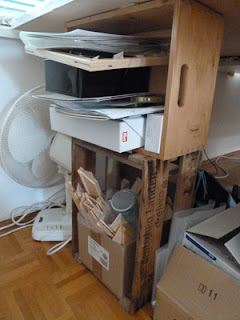 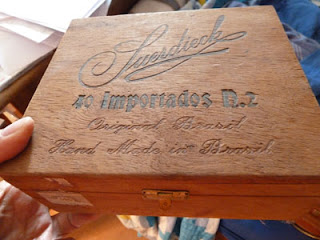 and this little treasury for postcards.
And of course wooden boxes have entered my attempts at maintaining some kind of order in quilting. This box is the nicest gift I ever received from my younger brother and holds my handquilting threads. 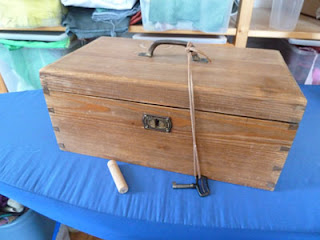 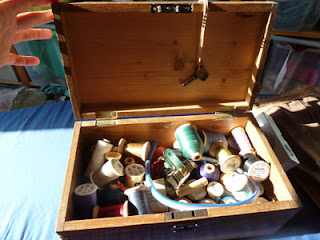 Slightly more prosaic, another former solid wine crate is my treasury of embroidery threads.
And the last annual flea market, a traditional outing for my son and me, has presented me with this little beauty, a bread box, according to the former owner. 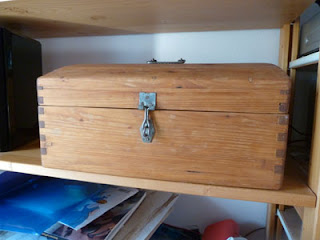 Now it is the container for my larger spools of machine quilting thread. 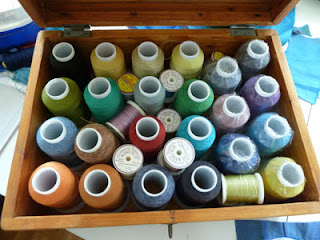 Perhaps some day I’ll be able to find a suitable wooden box for buttons. Let’s find the next flea market!
Posted by Uta Lenk at Saturday, August 10, 2013