Do you have a favorite quilt of yours? I do. 'Illuminated', a white combination of silk, plastic meshing, pearls, corals, organza threads and an LED-string.
It was born out of the challenge in Ste. Marie-aus-Mines that called for combination of different materials. Can’t remember the exact title of that challenge... I entered – but I had managed to misread or rather, misinterpret, the size restrictions, it was too big, and didn’t get in. As Linda Colsh said during the opening of the exhibition that year, “Size does matter.” I understood that as a direct reference to my quilt and am sure I blushed noticeably, except that nobody was looking at me at that particular moment... 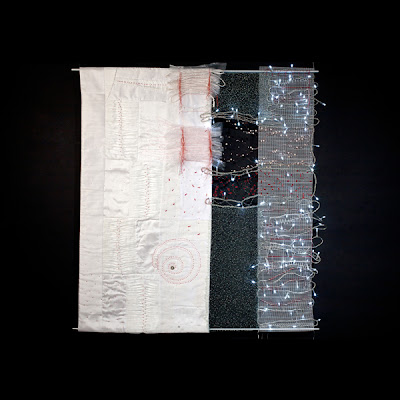 However, “Illuminated” got another chance as I turned around and entered it in SAQA’s “Beyond Comfort”. Not thinking about the troubles this would cause.
At the opening in , the plug for the light string started smouldering in its adapter, and the quilt got turned off in order to prevent NEC from burning down. I went ahead and got another plug and adapter for the , shipped them to Bill Redeker, and then it seemed ok for quite a while. Until earlier this year when I was told by the curator that there had again been ‘some problems’ with 'Illuminated'. A little later I learned that somehow the plug had been lost. How can you lose the the plug to a quilt with clearly electrical special effects right when you are packing it? Beyond my comfortable understanding!
In any case, it was either show the quilt without its lights on -  or remove it from the show. I opted for the latter because I did not want people standing in front of it and laughing at the fact that it wasn’t lit.
So 'Illuminated' came home in May. I had to go to the customs office and have a bit of a discussion with the customs people who really wanted me to pay customs for my own quilt. They did tell me how to avoid these problems next time when I send a quilt to an international exhibit – get a stamped export permit when sending it, which would then count as proof upon its return. If it returns within three years. Or just declare material value of under €200. Really learned something there on the side!
At home, I first tried to take a transformer from another LED-string, but it made a flickering light that was decidedly unpleasant to look at.
To be honest – when substituting the first plug after the accident in , I had simply taken a transformer from another LED-string and sent that together with a new adapter. Nobody ever complained about the light quality, but then perhaps nobody noticed simply because nobody knew that it was supposed to be different? Did anybody who reads this blog see the exhibition "Beyond Comfort" somewhere before January this year, and did you notice anything about the steadiness of the light?
I nevertheless put the quilt in the exhibition of my quilt group in May, and a visitor told me the flickering might be due to the fact that this transformer was not for the correct number of lights in the string. Get another transformer, and everything should be fine, that's what he suggested.
I went back to the electrical supplies store where I had bought the string in the first place. The problem is that I had bought that string at least four years ago, and did not know the name of the brand anymore. They took note of the number of the string as noted on the tag, and have been trying to get the right transformer since then. The first one again made a flickering light. The second one had the wrong connecting plug. The third one arrived yesterday, and again the light has a certain flickering quality.
Don’t know what I should do now. I think they are probably getting fed up with me at the store, although they have been very polite and definitely tried hard. I am getting embarassed to go back, though.


What have I learned from this? Don’t make quilts with LED-strings integrated into them – unless you plan to keep them next to you all the time. Otherwise you are bound to get into trouble. Or only attach the lights loosely so it might be easy to substitute with another. And don't give favorite quilts out of the house, keep 'em with you all the time.
Posted by Uta Lenk at Wednesday, July 10, 2013

Email ThisBlogThis!Share to TwitterShare to FacebookShare to Pinterest
Labels: Beyond Comfort, Festival of Quilts in Birmingham, LED-string