After my slightly bumpy submission of entry to the FoQ this year I received the labels by e-mail a few  weeks ago and sent off my quilts early last week. I had completely forgotten how careful you have to be about attaching the right label to back of the quilt, to the outside of the package, and loosely inserting one in the package... 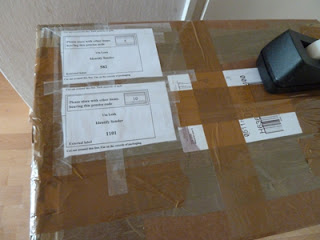 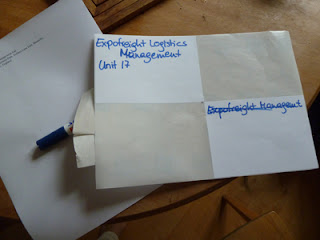 I sure do hope I got it all right!
At least this time I was allowed to pack two quilts in one package, this was not possible last time I sent quilts to FoQ. Still, postage was € 17. Well, that’s a lot cheaper than myself going to the Festival, as much as I would have liked to go. But after my extended visit last year it just wasn’t possible to do it again this year. At least two of my quilts will be present on the premises.
I even dared check the little box which said “send juror’s remarks”. Now I wonder whether I should have done that. Last time I received a comment ‘Beginner’s design’ on one of my Play of Lines quilts, which really hurt me a lot. But perhaps I will just not look at the comments when the quilts return.
Also entered Play of Lines XXXII at Quilt Nihon. Only one quilt. Very briefly I had considered entering two, because a Japanese friend had told me that Play of Lines XXX was so Japanese in its choice of color. So I thought it might be a possible second entry.

Somehow I get the impression that Play of Lines quilts aren't doing too well in getting into juried exhibitions. Because I had managed to enter my quilt Play of Lines XXXIII: Red Line to the challenge in Ste. Marie-aux-Mines WAY ahead of time, at least 30 hours before the end of deadline. But I have already received the rejection for that one. As I had somehow known would happen. Last year’s juror’s don’t get a guaranteed spot the year after!
Now I have to figure out for myself whether I want to submit this piece to other upcoming possible shows. Or just show it in my upcoming exhibition in . I think it is a strong quilt. But obviously this year’s jurors did not think likewise. And perhaps its strength does not fit into a competition/challenge.


I had just recently (re)read Terry Jarrard-Dimond’s re-published blog-entry/article on thoughts on juried exhibitions . In this she talks about her process of choosing shows to which she submits, and comes up with a very interesting list. The fact remains, though, that all these wise and important reasons for choosing to submit don’t protect you from that feeling of frustration upon receiving a rejection... And then you have to pick yourself up and put yourself together again.
Posted by Uta Lenk at Sunday, July 14, 2013