On meeting size restrictions and deadlines...

In the summer I became part of an international quilt group with members from five different countries. (We are planning to go public when we have a little bit more to show as a group, right now we are still sort of working undercover.) Assignments for quilts are passed out by the members according to a rota, and the second assignment called for a scale of greys, with a little bit of color.
That immediately gave me an idea for a quilt that would well fit into the “Inspiration Bauhaus” exhibition that I am working on and which will be on display at Fagus Works in October. I have shown a first glimpse of it here.

Here are a few stages of development of the quilt:

Now it is in the process of being quilted. I even hope to be able to show it in my exhibition in in January already.

However, I had not met the size-restrictions that Ita had given us, and this quilt does not qualify for the assignment which is due by the end of the month. I have a number of left-overs from making this one, however, and ideas, and will be able to make a quilt 40 x 80 cm large. 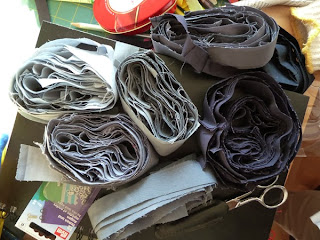 Although it probably won’t be exactly on time...
Posted by Uta Lenk at Monday, December 23, 2013