After I wrote about the wonderful book on ghelims that I discovered in the museum during my visit in early November, I did go to see the current exhibit on Maroccan Rugs in the Pinakothek der Moderne.
I had read about it in the paper when it was opened, had heard good things about it from friends, and was determined to go and see it even before I discovered the other book.
Very impressive, very much worth seeing! Photographs were allowed without flash, so I can show you a few although I haven’t bought a catalogue yet. (I will, though.) 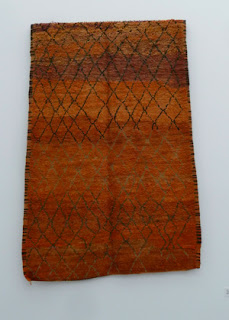 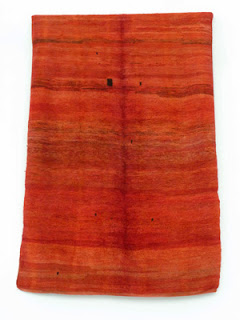 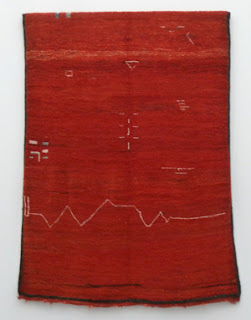 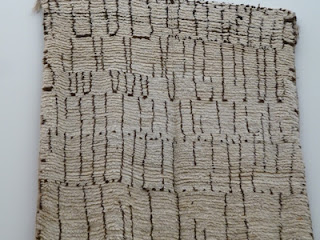 Some of the rugs were purely woven, yet most of them were hooked. Some on both sides. 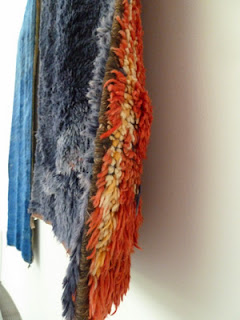 With some you get the impression that the weaver started off with a pattern in mind and then did not  quite remember later on how s/he wanted to continue. Or maybe just changed mind halfway through. These I found particularly interesting, as the break in pattern appeared so slightly and created a particular kind of suspense. 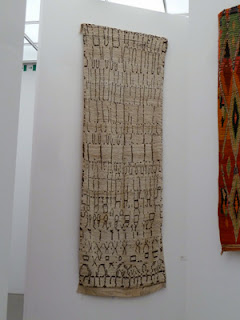 With this one it seems the warp ran out before the weaver had finished the intended pattern. But I love the way it leaves things 'open': 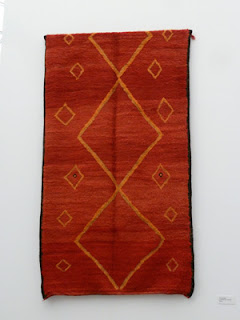 Overall, I was very much reminded of the quilts of Gee’s in the liberty and ease with which patterns are handled. And even if you bear in mind that these pieces were made to lie on the floor, not to be presented on walls, they have a strong presence that draw you in.
Similarly to the exhibition of Amish Quilts that was shown in the exactly same room several years ago, however, it must be said that too much was forced into this rather small space. Too many pieces in too little room, so that it wasn’t always easy to catch a good view of the individual rugs. But the arranger had made the most of it, and walking around the panels that were spaced diagonally all over the room, at least quite a few interesting views occured suddenly and unexpectedly. Luckily there was a second part of the exhibition on the upper floor, and here nothing was left of 'too little space'. 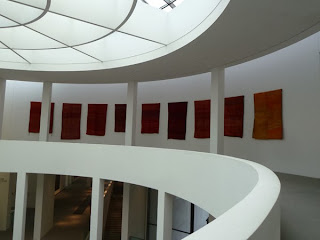