Have you ever seen one of the little Hummel figurines? For a long time, one of ’s big-number export items. Very popular with Americans, but not only there. Out of production for a while, but back now.

Before we moved to the little town where we live now, I knew very little about Berta Hummel, except for that she had designed these figurines. Having outgrown the age when I liked them, I was surprised to see a sign for a “Berta Hummelmuseum” in an even smaller town about 15 miles down the highway. Not a museum I would ever be going to, I thought.
Imagine my surprise when, a couple of years later, a full-page article in “Die Zeit”, a renowned German weekly praised Berta Hummel and her artistic talents, including a large scale version of the following picture:

I was stunned. Then I “met” her again when I happened to be near Sießen in Allgäu, where they told us that she had lived there in the convent, and died there just after World War II, and eventually went to see the museum, and started doing a bit of research. I found it hard to understand how somebody with so much talent would take a decision to enter the convent.

On interlibrary loan I took out this bilingual book on her life, which also features a lot of pictures. 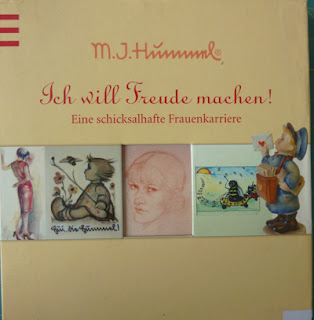 Berta Hummel was born in Massing, grew up as one of six siblings, and must have been a really wild one during her childhood.

She went to school in a Catholic boarding school, where her artistic talent, which had been obvious early on, was recognized and supported. But her lack of conduct was repeatedly mentioned in reports home. And then she went to study at the for the Applied Arts – certainly not a ‘usual’ path to follow for a girl from the country in those times.

Not much is known about her time in , but she did meet two nuns who had come back to the academy to continue their studies, they became friends, she moved in with them in their boarding house, and eventually Berta Hummel decided to take the veil. Her professors were surprised and disappointed, would have wanted her to continue her promising art career. She did follow her art in the convent, working in the workshop for church decorations.
After only a few years at the convent, even before she had taken the final vows, her drawings of little children were discovered by a art publisher, first printed as little cards to give away, then published in a book.

Big rage, very successful. And then the porcelain company jumped onto the wagon, started making figurines, which brought in a lot of money for the convent. The publisher and the porcelain company kept pressing her for more and more pictures, even started fighting over the first rights to these pictures.
The Nazis didn’t like the figurines, but let them be sold to foreign contries to bring in revenues. And after the war, American soldiers bought them and brought them back to the States.
They couldn’t save Berta, though, who had fallen ill during the war, when the convent had been expelled from their buildings, caught tuberculosis, and died in November 1946, just a few months before penicillin became so widely available that it perhaps might have saved her life.

I still don’t understand how a talented woman – who used to be a ‘wild girl’! – would decide to take the veil, subjecting herself to the severe rules of a convent, and her artistic talent to thematic restrictions. Perhaps eighty years in history just bar the understanding of thought processes that would lead one such a way.
was going through very hard times after the war, but it is mentioned in the book that Berta once told her visiting sister “They are letting me die here all by myself!”, thus indicating that she did not receive proper attention during her long sickness. Later on, she was admitted to specialist clinics, but it was too late. That’s what I understand least of all – why would they let her die so miserably like that instead of making sure she received all proper and possible treatment, after she had brought in so much revenue for the convent?
Posted by Uta Lenk at Saturday, February 16, 2013