On receiving the Forced to Flee catalogue

Day before yesterday’s mail brought a pleasant surprise with the shipment of the artist copy of the catalogue for “forced to flee”. I’d had no idea that a detail of my quilt would be published on the cover. It is a very nice and impressive catalogue, and I feel very honored to be included amongst the selected artists.

And with a quilt like this, which is so important for me, and very emotional. Not the most personal quilt I ever made, but certainly one of the most emotional ones indeed. 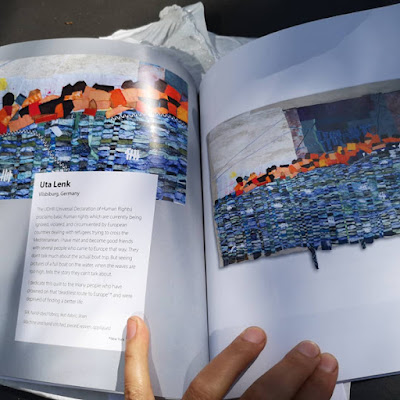 And I am profoundly moved at the variety of takes at the topic that are included in the selection. Forebears who emigrated to the US (at that time they were still welcome to the country, not facing walls, water bombing or blood hounds at the border), fires that have destroyed homes, the atomic bombs of Hiroshima and Nagasaki, looking at migrants as people, not burdens or numbers, the dead boy on the beach, barbed wire as a very impressive embroidery stitch on several pieces…
As I was leafing through the pages, recognizing so many names and thinking about the kinds of friendships that have formed with many of the other artists in this exhibition, I felt a deep sense of connection, and of gratitude. For the influence that being a member of SAQA has had on my quilting, the development that it made possible for me. And for the possibilities of meeting so many interesting people and becoming friends with them.

At the same time I was outraged. The topic of the exhibition, so vibrant and important, so many deeply touching quilts. And yet – look at what is happening now. It was the day after the fire in the cathedral of Notre Dame in Paris. I, too, have been to the cathedral, I was impressed, and I am very sad that it was damaged so badly. But looking at the photos of the quilts I wondered whether the amounts that were being donated in that very minute to “rebuild it, but even more beautiful”, zillions just whipped out of pocket books of entrepreneurs, companies could not be spent in a more sensible, humane way. In a way that is more in the spirit of Notre Dame, for whom the cathedral was built. Yes, a cathedral is important. We need places to worship. But this one in particular has become a national symbol for a state much more so than it is in the people’s minds as a place of worship.
If the overflowing funds that are obviously out there, as they can be distributed (or at least pledged) so quickly, before we even know how much restoration will cost, or whether it will be really possible, if those funds had been poured into the Banlieues of Paris a few decades ago, giving immigrant childrean a perspective, schooling, a job, then La Grande Nation would be in a different state.
And the same holds true for any other topic of unrest that are unsettling the world these days. If politicians would just listen to scientists and numbers, AND to millions of school children taking their frustration at the inactivity in face of the climate catastrophe to the streets, if they would spend the amount that has now been offered to rebuild a house of stone, to save the house of nature that we are living on, then they would not need to discuss the fact that these children are skipping school, and that cannot be tolerated, it is “breaking the law”. If serious measures were taken, not regarding economic profit, but global and universal perspective for a liveable future, let’s do everything we can – then these children would probably gladly go back to school on Fridays. (Listen to an excerpt of Greta Thunberg's speech at the European Parliament in Strasbourg this week here.)

If leaders had seen Africa as a continent of dignity, considered its peoples as equals and its prospects as global instead of keeping the countries in a permanent state of economical and political dependency on Western Aid, perhaps the situation in those countries would be different, and we would not have a threat of millions of people taking to the road in search of a better, any life.
German is known for its terrible (in the eyes of foreign language learners) capacity to combine several words into one and come up with a newly created meaning.

Just a week ago I was reminded of one of these linguistic monsters we have had to create, when I was talking to a city employee about the first Fridays for Future demonstration in our town. 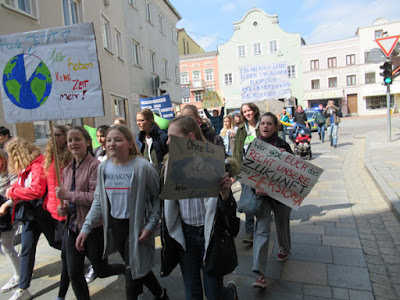 The word is “Klimawandelfolgekosten”. Climate change follow-up costs. Meaning economic effects in our own country (drought, floods, or other extreme weather conditions), costs of maintaining political stability in countries even more effected by climate change, refugees and migrants caused by changing conditions, lack of professional perspectives, agricultural devastation… At 22 letters it is not even the longest we can come up with, I have counted 32 letters in a word. But it is definitely one of the more gruesome words we have constructed to abstract our awareness from what the entire situation is about.
(And I am not going to start about my wrath at Germany’s Minister of the Interior linguistic jingles with the new law for ‘Regulated Back-Transfer of Migrants’ here.)
36 quilts selected, from a total of 191 entries – perhaps SAQA should have set up a group of exhibitions, including all entries, or at least 100, and sent them to all corners to the world. Where will we flee when this planet has been mined towards extinction?
Posted by Uta Lenk at Friday, April 19, 2019