Last Saturday a small convention and discussion of refugee issues and politics took place in our town. The organizers had invited me to show some of my quilts, in recognition of the fact that I have been active in the volunteer group in town for several years now, and because I received the Cultural Award of the city earlier this year. I picked out the quilts that have some connection to the topic of the convention, which, as it turned out, adds up to 7 or 8 quilts by now. However, unfortunately the room where most of the convention took place does not really have many hanging options. There are no fixtures on the walls, no gallery rods, and because the building is old and the particular room is under the roof with slanting walls it was not possible to put nails into the walls. So I could only hang three quilts.
One possibility was in the stairwell, where "Promised Land 2015?" could be placed in good view as people were going down the stairs - 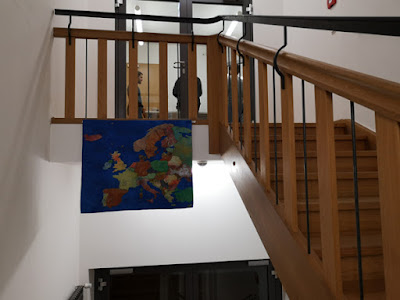 or they had to notice the mirror image as they were coming up and then turn around. 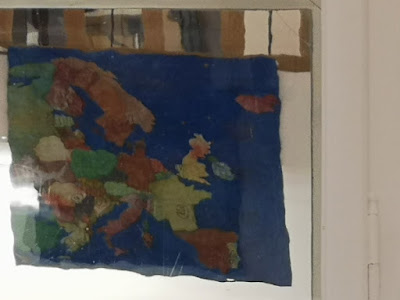 I assume, though, that a lot of people were using the elevator and thus never got to see this.
The other two quilts were in the room itself, on the sides of the front stage.


On the left side of the stage, "Everyone has the right" made its first public appearance.

I think they both looked quite impressive, and I did get a few admiring remarks and comments. However, most people were concentrated on the talks and conversations with each other, after all it was not an art exhibit as such. But it was good to see them presented to a public.
Posted by Uta Lenk at Monday, November 26, 2018