So I managed to finish my piece for "Forced to Flee" in time - well enough in time to get it to the photographer, and to pick up the CD with the pictures before last weekend because I wanted to get the entry done with over the weekend.
Only on Sunday evening did I see that he had forgotten to put the detail photo onto the CD. At that time of day it was too late to take a decent detail photo myself to add to the entry. But luckily the deadline was only on the 31st, so I could go back to the photographer on Monday and get it. And still be on time. (Then he told me I should have called him, but I would never have dared to call him on the weekend - yet what would I have done had it been a last-minute thing? Besides being really annoyed...?)
On Sunday I had decided that I was going to enter only the new piece, up until then I had thought I would enter two of the older pieces as well. But because I assumed that there are going to be so many entries I then decided to leave the two older ones out. Of course I hope it's going to get in, and of course I am worried it might not, and then I will have to reconsider where to enter it to give it other chances...
On Sunday, however, I also read the prospectus more closely - one of my problems with entering shows, I don't read those things closely until the last minutes - and found out that it says we were encouraged to blog about our work in advance. While I had been holding back from talking about it. Oh well...

So here follow a few pictures from the process of making it.


The piece has an upper and a lower part, which required two distinctly different methods of assembly.

Here is the upper part, after the 'background noise'-writing had been added and the necessary stabilizer behind it had been dissolved as well. 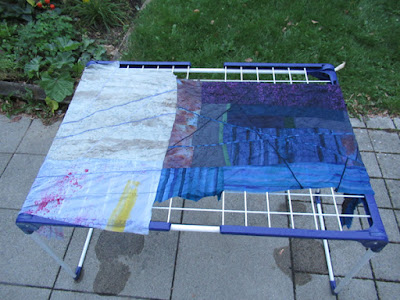 And here is a detail of how I transferred some lines onto the piece after the two parts had been put together. 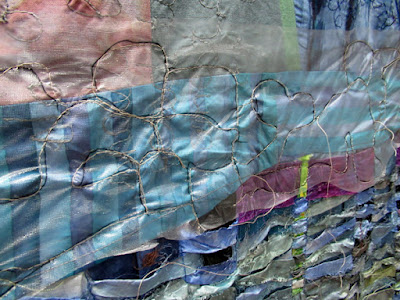 This watersoluble plastic was kind enough to prove rip-out-able, though, and did not require yet another process of dissolving.
I put a piece of heavy linen as the backside fabric, no batting. Stitched and layered, that's what was required. Although in worst case, I could argue that the lower part, which is stitched onto a layer of fabric hidden in the middle, would let it qualify for a three-layers-piece, should the need arise.
I am still going to wait about posting a picture of the entire piece until I hear from the jury whether it got in...
Posted by Uta Lenk at Saturday, November 03, 2018