A few weeks ago I gave a piece of green fabric to a friend as a gift, and in her thank-you note she made a statement about how much she loved green, and how much she regretted that not a whole lot of green quilts were being made in Germany. To be honest – I hadn’t noticed. But when I thought about the colors that my quilts have, I had to agree – certainly I haven’t done a whole lot of work in green. An early one has green in the background, and last year's donation for the SAQA benefit auction also was in green:

And then there is, of course, Play of Lines X, which traveled with Color Improvisations for two years.
I included it in both my shows in Freiburg and earlier this year, and it kept receiving very positive remarks – but that’s about the extent to which I have worked in green.

However, I do have four boxes of green fabrics in my studio. 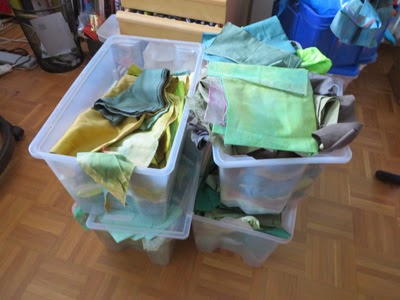 And lots of green scraps in my ever-growing scrap collection, just where do they come from if I don’t use green much?!

In any case, my friend’s remark triggered more thoughts, and very quickly I came up with an idea for another quilt for my exhibition in the fall at Fagus Work in Alfeld. The exhibition is called “Inspiration Bauhaus”, and I have been concentrating on working with the basic geometric shapes. I also would have wanted to do some things based on Gunta Stölzel, Anni Albers, or some of the other women, but somehow the geometric shapes kept pushing themselves to the foreground, and the ladies have to wait, still. For several months now I have been thinking that the next piece in the series I would be making would be with yellow circles. But as it turns out, it’s green, and squares.
So I’ve been turning over the scraps, partly relatively well-sorted, partly all in a mess. This happens because I keep throwing them into a basket, meant to be sorted after each project, but the new project gets started, before the most recent scraps get put away, and then already a few new scraps have joined the others, and there is just not enough time to stay ahead of chaos...


So Shades of Green (Shapes 21) has been growing on my wall. 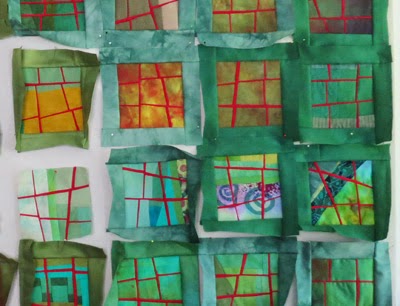 Depending on whether Shapes 20 will be accepted into Wide Horizons IV, this is either the next to last quilt I need to finish for October. Or the one before the next to last.
Posted by Uta Lenk at Tuesday, June 10, 2014